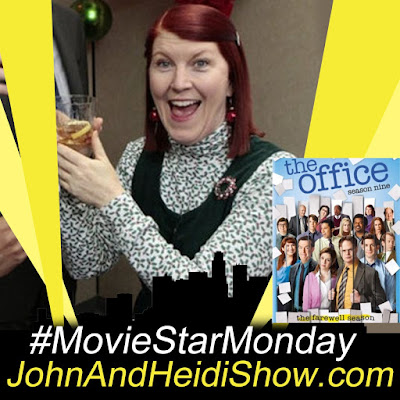 This #MovieStarMonday we visit with Kate Flannery (The Office)

She's also in many other TV shows and in many movies! Her latest film is out now! Golden Arm!

National Clean Up Your Room Day

A new study finds no link between the time teens spend on devices and mental health problems. (https://bit.ly/3xMhJQB)

The average person tosses out this tech-related item about once every three years. (Mouse pad. There are so many studies about how dirty our toilets, kitchen sponges, and car interiors are - I bet our mouse pads are the worst offenders.)

A Las Vegas news anchor was arrested after being found naked and passed out in her car, police said. Fox 5 Las Vegas morning weekday anchor and reporter Feven Kiflegiorgis was busted nude and asleep behind the wheel of her Audi at about 7:30 a.m. on March 20th. Kiflegiorgis, known as Feven Kay, told cops she didn’t remember how she got to the location where she was found. Officers also reported the smell of alcohol emanating from the reporter, but she declined to submit to blood for testing. She was later charged with reckless driving with a disregard for the safety of a person or property in the incident. She was ordered on April 21st to pay a $1,000 fine and to attend driving school. The charge was later reduced to misdemeanor reckless driving, Kiflegiorgis said. “As I move forward, I want you to know I have learned from this and I will continue learning and I truly thank you for your support,” she said to her audience.(https://bit.ly/3vuDzWM)

A “Wheel of Fortune” contestant became the first person ever to win a house on the game show. She won a new pad in the Latitude Margaritaville community of Daytona Beach, Florida — valued at $375,000. (https://bit.ly/32WYFRF)

The much-anticipated Black Panther sequel gets an official title: ‘Black Panther: Wakanda Forever.” The sequel to “Black Panther” is scheduled to hit theaters in 2022. (https://bit.ly/3vwFGJI)

A new Snow White attraction at Disneyland California is under fire for showing a Prince kiss a sleeping Snow White without consent.(https://www.dailymail.co.uk/news/article-9536441/Disneylands-revamped-Snow-White-ride-draws-backlash-sleeping-kiss-scene.html)

A passenger on a flight in Vietnam left a wallet stuffed with $45,000 in cash on the plane. Vietnam Airlines flight attendants were able to return the passenger’s wallet. (https://bit.ly/3farwHV)

A production company in the Czech Republic held a drone light show in Prague to lift the country’s spirits. (https://bit.ly/3umyboL)

A British man was sentenced to six years in prison after demanding McDonald’s Chicken Nuggets at gunpoint, but settling for a Double Sausage McMuffin instead because it was too early for lunch. (https://bit.ly/3xKL1Pr)

The Colorado Legislature has passed a bill to legalize human composting. (https://bit.ly/3gYvWnB)

Plastic Easter eggs and plastic Easter grass were invented by a man who holds more patents than Thomas Edison. If you've ever enjoyed an Easter basket with plastic eggs and grass, then you can thank Donald Weder, the man who invented both. Weder not only holds the patents on these holiday staples, he also holds a total of 1,413 U.S. patents—including ones for water-based inks, flower-pot covers, and decorative wrappers. That's compared to Thomas Edison, who held just 1,093 U.S. patents.

An Australian suburb has been invaded by thousands of cockatoos. (https://bit.ly/2PJeQ1J)

A man accused of dressing up as an Amazon delivery driver to steal packages was taken into custody on Monday night, according to Philadelphia police. Action News was there as the suspect was arrested in the city's Fishtown neighborhood. Over the weekend, surveillance video captured the suspect parking his bike. Video shows him walk up to a home, take a package on the doorstep, nod at someone passing by and take his time riding away. On Monday night, the suspect was spotted pedaling through a nearby neighborhood with several stolen parcels, including a case of bubbly sparkling water, speakers, and a box of Birkenstock shoes. The bike the suspect was using was also recovered at the scene. Police are still investigating how the man managed to get an Amazon vest, and for how long he'd been targeting homes in this neighborhood. Fishtown resident Trey Dodge says he's had packages stolen at least half a dozen times. “They never steal anything valuable. There was a kid's water bottle and a shirt or something,” said Dodge. (https://6abc.cm/33hmIL5)

A 28-year-old woman was arrested Sunday after allegedly assaulting and intimidating a flight attendant during an American Airlines flight from Miami to New York City. U.S. Department of Homeland Security (DHS) Officer Anthony Apath alleged in a four-page criminal complaint that Chenasia Campbell “began yelling at a flight attendant for not picking up her garbage” roughly midway between the flight from Florida to New York. The shouting incident, which occurred in the crew area of the plane, allegedly prompted a second flight attendant to intervene. “The flight attendant requested assistance from the Victim, who is also a flight attendant,” the complaint alleges. “The Victim attempted to separate the defendant from the flight attendant, at which point the defendant accused the Victim of pushing her. The defendant then struck the Victim with closed fists and pulled the Victim’s hair.” After a denied request to land the plane, Campbell was placed “in hand restraints for the remainder of the flight” by an off-duty member of the NYPD. Upon landing at JFK International Airport, Campbell was arrested where she remained through her arraignment on Monday afternoon. She was granted release on a $15,000 surety bond. Her travel is limited to New York City and Long Island. (https://bit.ly/2QWJ8yB)

Good Samaritan Jumps Into Bay To Save 2-Year-Old After Car Crash On Bridge
https://www.sunnyskyz.com/good-news