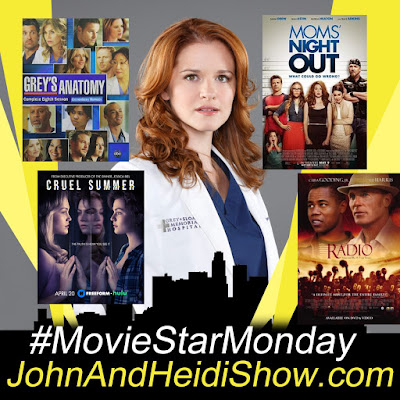 This #MovieStarMonday we visit with Sarah Drew from movies like "Radio"... "American Pastime"... "Mom's Night Out" and "Indivisible". Also on TV as Hannah Rogers in The WB family drama series Everwood and Dr. April Kepner in the ABC medical drama series Grey's Anatomy.

Now she is on Freeform’s hit series Cruel Summer. She has a pivotal episode on Tuesday, May 18th.

A new survey reveals that Americans are turning to salads “more than ever” to avoid gaining the “COVID-15.” The survey of 2,000 Americans finds 73% have been dedicating themselves to better daily routines over the past year, which includes healthy habits like getting more quality sleep (55%), eating healthier foods (53%), and working out more often (47%). (https://bit.ly/3tBUTrD)

A survey shows one in three people would rather lose a finger than their high-speed broadband internet connection.

The manager of a Minnesota movie theater sold cocaine hidden in a bag of popcorn to a police informant. 39-year-old Jamie Lynn Hiniker was named in a criminal complaint charging her with narcotics sales. Hiniker is the general manager of the four-screen Spotlight Theatres in Mankato. If convicted of the felony drug count, Hiniker faces a maximum 20-year prison term and a fine of up to $250,000. Hiniker was a target of a Minnesota River Valley Drug Task Force probe. An investigator reported that he knew “through previous investigations” that Hiniker worked at a movie theater and “the sale of cocaine typically took place behind the theater in an alley or at the theater in a popcorn container with popcorn.” In a phone call with Hiniker, a confidential informant last year arranged for the purchase of $100 worth of cocaine. After conducting the buy at the theater--which is in the Mankato Place mall--the informant told cops that they “entered the mall and Hiniker put the cocaine in a popcorn bag. Popcorn was then placed in the bag.” The informant turned the popcorn bag over to police, who say that the cocaine Hiniker sold on July 21st weighed .406 grams. (https://bit.ly/2R5AUUT)

Mickey Rourke has referred to Marvel movies as “crap” in a recent Instagram post. This is also pretty funny because Rourke starred as the main villain, Ivan Vanko, in Marvel’s “Iron Man 2.” (https://bit.ly/3y5cP1a)

Wendy Williams was seen tearing up at the unveiling of her wax figure at Madam Tussaud's. (https://bit.ly/3y2YySL)

If you’re planning on grilling out this summer, here’s a tip from Men’s Health: don’t use a water bottle to squirt out flare-ups. Their sources say it can create burn-causing steam, and even worse it can damage the finish on the grill. Men’s Health says to avoid flare-ups all together, trim the fat from the meat and cook with the lid on the grill.

A tiger was recently spotted on the loose in a Houston neighborhood — with one man pointing what appears to be a gun at the wild animal. Luckily, in the video footage the tiger seems totally harmless. The big cat with a collar was roaming around the residential area at about 8:00 p.m. when the unidentified, apparently armed man yells at another man to take the tiger inside. But I’m happy to report that nobody was injured. (https://bit.ly/2QZj9a5)

As COVID-19 ravages India, some have taken to rubbing cow feces and urine on their bodies as a way to fight the virus. Doctors are warning against the practice, saying there’s no proof it boosts immunity or helps treat COVID. “There are also health risks involved in smearing or consuming these products — other diseases can spread from the animals to humans,” Dr. J.A. Jayalal, national president of the Indian Medical Association. In Hinduism, the cow is a scared symbol of life and earth. Some residents of Gujarat in the western part of the country have been visiting cow shelters to rub the excrement on their bodies, then hug or honor the cows while the mixture dries. When it does, it’s washed off with milk or buttermilk. (https://bit.ly/3uDZRFr)

You have a nail in your body. Or, at least, the components of one. Iron is an important nutrient that the human body needs. It helps your red blood cells carry oxygen, which is necessary for producing energy throughout the body. That's why an iron deficiency can present itself with feelings of exhaustion. Amazingly, a healthy adult has about three grams of iron, enough that, if it were pulled out and melted down, it could form a nail up to three inches long.

Mexican authorities discovered a 650-foot tunnel built by Joaquin “El Chapo” Guzman in Tijuana — across the street from a National Guard base. El Chapo easily got away with wheeling and dealing for so long and made the Mexican authorities look like fools. (https://fxn.ws/2R16Cmu)

The most shocking Mother’s Day gift this year was the handiwork of a Wisconsin man. During a disturbance on Sunday afternoon, a 43-year-old woman was tased in the neck by her son, who was upset “because he could not find his phone.” Investigators say that 22-year-old Andrew Peterson tased his mother in the victim’s home in Lone Rock, a village about 45 miles west of Madison. After the tasing, Peterson left the residence with his 20-year-old girlfriend and the couple’s young child. Police subsequently located Peterson, who reportedly “admitted to using an electronic weapon...on his mother on Mother’s Day.” Peterson’s girlfriend, Colleen Parker, was also arrested for allegedly punching Peterson’s mother in the face during a confrontation Thursday. Peterson and Parker had been living in the victim’s home for the past several months. They were booked yesterday into the Richland County jail. Parker was charged with battery and disorderly conduct. Peterson was charged with battery, disorderly conduct, possession of an electronic weapon, and bail jumping in connection with a separate domestic battery case pending in Iowa County.(https://bit.ly/3uDSOwG)

A school bus driver has been arrested for allegedly having a loaded gun on the bus. Norfolk Police said students at King Philip Regional Middle School found the gun on a seat in the back of the bus Thursday, but none of them touched it. The driver, 65-year-old David Tripp, works for Holmes Bus Company which is hired by the school district. A parent called police Thursday night to report students found the gun on the bus after school. Tripp allegedly told police kids found a pellet gun on his bus and then he tossed it in the woods. Investigators wasted time there before finding the real gun at Tripp’s home. “I’ve known the individual for a long time. He’s a long time Norfolk resident and I’m upset with him that he would do this to the residents in the town of Norfolk,” said Police Chief Charles Stone. After an investigation, officers determined the gun fell out of Tripp’s pocket while he was cleaning up the bus after dropping off Norfolk elementary school students. No elementary school students came in contact or saw the gun. Tripp has a License to Carry a Firearm, but it will be suspended. Police will also seize any and all firearms in his possession. Tripp faces several charges including reckless endangerment of a child. (https://cbsloc.al/2QWb7ib)

Special Education Teacher Surprises Student On His Birthday Dressed As A Unicorn https://www.sunnyskyz.com/good-news