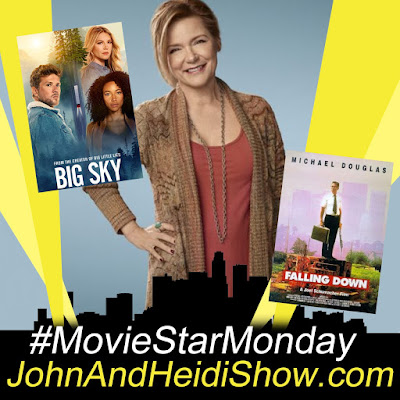 This #MovieStarMonday we visit with Dedee Pfeiffer (Michelle's sister)


After a 10-year absence from Hollywood, Dedee Pfeiffer is back starring on the new David E. Kelley helmed drama, BIG SKY. The series is set in rural Montana where private detectives search for two sisters who have been kidnapped by a truck driver on a remote highway. The series returns to ABC TuesdayApril 13th!

During her recent time away from Hollywood, Pfeiffer has been hard at work earning a Bachelors Degree in Psychology at Pierce College, Valley College and California State University Northridge. It was at UCLA where she earned a Masters of Social Work. Her area of concentration includes mental illness, substance use and homelessness.

Television fans will know this talented actress from her series regular roles on FOR YOUR LOVE with Holly Robinson Peete, Tamala Jones and James Lesure and from the award winning comedy series CYBILL opposite Cybill Shepherd and Christine Baranski. This series won a SAG Award for Outstanding Ensemble Series. Other notable small screen guest roles include but are not limited to ELLEN, SEINFELD, CSI, CSI:NEW YORK, WANTED, FRIENDS and ER.

No stranger to the big screen, Pfeiffer also had impressive roles in the films RED SURF opposite George Clooney, FALLING DOWN with Michael Douglas, TUNE IN TOMORROW with Keanu Reeves and INTO THE NIGHT with Jeff Goldblum. Early in her career she starred in the indie cult film VAMP with the legendary music icon, Grace Jones. In addition, she has dozens of other studio and independent films to her credits including producing the indie award winning film LOREDO. The short film, THE TUB in which she starred and produced won multiple awards including a festival Best Actress Award.

Dedee Pfeiffer, the single mother of two bright and talented young men is happy to be back working at her creative craft. She has returned to the living rooms of television fans everywhere with BIG SKY. https://abc.com/shows/big-sky

A survey found that four in ten Americans believe that humans and dinosaurs lived at the same time.

Americans spend an average of 18 full days in their car every year, so it’s not a big surprise that 64 percent of us consider our car a friend. Over a third of Americans would rather themselves get a scratch than their car, while another 15 percent would rather break a bone in their own body than have their car break down. One in five (21 percent) would rather spend an entire day in jail than have their car get totaled, and a wild 13 percent of Americans would actually break up with their partner before parting with their car. 44 percent have named their car.

Of all the things that officers with the Transportation Security Administration (TSA) find every day at security checkpoints, this has to be one of the oddest. Earlier this month, TSA agents at William P. Hobby Airport in Houston saw what looked like an unusual lump inside a passenger’s breakfast burrito as the traveler went through a security screening. It was more than just unusual. It was crystal meth. Yep, according to the TSA, due to the unusual nature and size of the lump, the officers requested an additional inspection of the food item. Once the wrapper was open, the Transportation Security Offer (TSO) noticed something dark and unusual in the middle of the burrito. Because the food item didn’t quite match the description provided by the traveler, a supervisory TSO was asked to assist, and she decided to run the breakfast burrito through the X-ray. Houston Police were also involved and ended up confirming the illegal substance. (https://bit.ly/3x9W18N)

Movie buffs are still reveling after Anthony Hopkins took home the best Oscar actor for his portrayal of a man with dementia in “The Father.” Reports say that Hopkins was asleep in bed during the entire awards show. (https://bit.ly/3tUpamy)

Tyler Perry is going viral for saying at the Oscars that he would not hate someone just because they're a police officer. (https://fxn.ws/3xnSCTX)

Which word or phrase are you tired of hearing? How about…

• There are people who have it harder than you.

The Maine Legislature is considering a proposal to legalize Viking-style funerals. (https://bit.ly/3v9eJeP)

U.S. Immigration Authorities have deported a man to his home country of Indonesia after he scammed wealthy wine collectors out of millions of dollars by selling counterfeit wines. (https://bit.ly/3n3EYAy)

A guy in Ukraine was fined after he was caught on video hanging underwear from the mirrors of vehicles in parking lots.

There's a decorated war hero dog. While in the trenches of World War I, the U.S. First Infantry Division found themselves unable to communicate with other troops because shellfire had damaged the telephone wires. A young private came up with a unique solution: Rags, a mixed breed terrier whom the soldiers had adopted in Paris, would carry the messages from one division to the next tucked into his collar. He saved many lives, and when Rags passed away—in Maryland, at the very advanced age of 20—he was buried with military honors.

The World’s First “floating sky pool” is expected to open in London next month 115-feet above the ground. It’s a completely clear structure that connects two apartment buildings. (https://bit.ly/3xyoWDU)

A man tested the patience of police officers and sheriff’s deputies in a bizarre standoff. It happened in north Austin, near the Domain, around 11:00 p.m. A man locked himself in a car after what police say may have been a domestic dispute. The Austin Police Department says officers surrounded the car as the man yelled at them. After driving a short distance, police say the man crashed into a ditch. He still refused to get out and started revving his engine — so much so that officers say the car caught on fire. He eventually got out of the car and started walking away. That’s when the Travis County Sheriff’s Office deployed its K9 officer. It’s clear from the video that the dog bit the man several times before officers detained him. He was treated for his injuries, described as non-life-threatening by Austin-Travis County EMS, and taken to jail. So far, police haven’t identified him. (https://bit.ly/3vjpJ9z)

Two D.C. police cars were totaled after officers decided to drag race each other. “Yesterday two 6D scout cars were totaled because officers decided instead of fighting crime, patrolling their beats, or engaging the community – they decided to drag race each other on Anacostia Avenue at 5:00 p.m. in the evening,” reads the email from 6D Commander Durriyyah Habeebullah. Sources say the email was sent to command staff following the crash Thursday. “What does this say to all the members of MPD who are passionate about their job and work hard every day to make a difference. This is not fair to any of us,” the email goes on to say. DC Police would not provide the incident report Sunday because the department only provides traffic reports through FOIA. Sources tell FOX 5 the officers involved, who are new to the department, started racing each other and that they were traveling at least 60 mph. Habeebullah said she was holding command staff responsible to have discussions about speeding and driving recklessly with officers. (https://bit.ly/2QAtAAz)