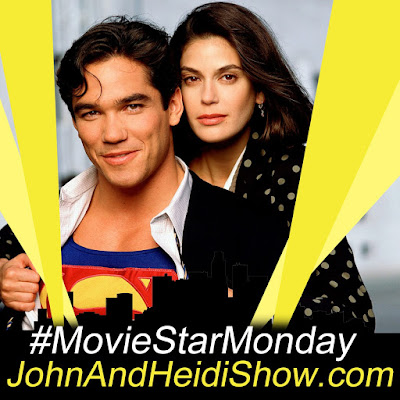 This #MovieStarMonday we visit with Dean Cain (Lois & Clark, God's Not Dead, Rat Race & Many others) https://www.imdb.com/name/nm0001002/

National Save Your Hearing Day

A new study shows that just 1 in 10 people with alcohol issues get treatment. (https://bit.ly/3hRbxRY)

Officials with the Franklin Police Department said an investigation is underway after a man allegedly stole opioids from a Walgreens. Police said the suspect hid inside the Walgreens on Murfreesboro Road on May 18 until after the store closed. When all the employees left, the suspect reportedly traveled into the pharmacy through the drywall and stole a large number of opioids. Franklin Police and Crime Stoppers announced a cash reward to anyone who helps identify the suspect. Anyone who recognizes the suspect is asked to contact Call Crime Stoppers at (615) 794-4000. https://www.wvlt.tv/

Fans say they're worried about actor Matthew Perry after he appeared to slur his speech in a promo for the “Friends” show reunion. (https://pge.sx/3u5Mr43)

Last week, Chris Rock joked that fellow comedian John Mulaney should hire his ex-wife’s divorce attorney to get as much money as possible in his own divorce. (https://bit.ly/3u3wefT)

The CDC is urging Americans to stop kissing and snuggling chickens to slow down a salmonella outbreak. (https://nyti.ms/3fsX5y1)

The Supreme Court rejected a bid by an ill death-row inmate to be executed by firing squad out of fear a lethal injection may cause excruciating pain. (https://bit.ly/3wIA1RF)

A Massachusetts convenience store worker found a trashed $1 million dollar winning lottery ticket and returned it to the customer who accidentally threw it away. (https://bit.ly/2ThtK0J)

A Virginia dad has invented a way for kids to blow out their birthday candles without spraying saliva spit onto the icing. Mark Apelt’s battery-powered Blowzee is activated when someone blows into it, activating a fan that’s supposed to put out the flames. (https://bit.ly/3oQ5376)

The Cicada Brood X are returning to America after a 17-year absence. (https://bit.ly/3fIRlyL)

A Lioness mauled a trainer during a live performance at a Russian Circus on Saturday. Russian authorities have not released the trainer’s name. (https://bit.ly/3bP8o0X)

A Missouri homeowner got a shocking wake-up call when a car crashed through the roof of their home overnight and landed just feet from their bed. No one inside the car or in the home was injured. Deputy Chief William Stamberger of the Eureka Fire Department said two teenaged boys were leaving a graduation party around 1:30 a.m. when their car ramped off of the roadway, landed at the bottom of a hill, and then catapulted up into the roof of a nearby home. The car landed in the master bathroom, just feet where the homeowner was sleeping. Wood and debris were strewn all over the room. Both the homeowners and occupants of the car will deal with their respective insurance companies to deal with the damage. The homeowners said they’re thankful their family and the two boys are safe. (https://bit.ly/3fdV8VJ)

A man with a gun entered a Wells Fargo on Lenox Avenue but left without any money and was quickly arrested by a Florida High Patrol trooper who was working off-duty at the bank. The Jacksonville Sheriff’s Office said the man entered the bank just before 1:00 p.m. walked up to a teller with a gun and demanded money. The teller, who did not believe the gun was real, did not give him any money and the man turned and walked out. Alerting an FHP trooper working in the lobby to the robbery attempt, he followed the man out and stopped the man in the parking lot and held him until JSO arrived to take him into custody. His name has not yet been released. There were no customers in the bank at the time and there were no injuries. (https://bit.ly/3fi3pZ3)