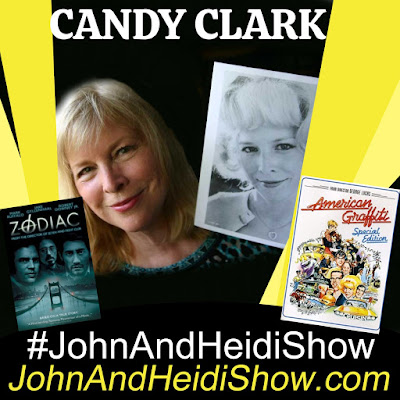 Today we visit with Candy Clark (American Graffiti, ZODIAC & many more) about her career and what she's been working on lately. https://www.imdb.com/name/nm0163748/

National Hole In My Bucket Day

Scientists have discovered “Impossible Crystals” with physics-defying patterns at the site of the world's first nuclear bomb test. (https://go.nature.com/3hG8bkx)

Responding to multiple 9-1-1 calls about a naked woman “walking around and jumping in and out of vehicles” at a car dealership, Minnesota cops discovered a nude 35-year-old suspect pleasuring herself while splayed across the floor of a pickup truck. Police dispatchers last Sunday were initially told that the naked woman was sitting alone inside a Pontiac SUV and that she “looked happy and did not appear to be hurt but appeared to possibly be under the influence.” When cops arrived on the scene in Mankato, the Pontiac was found running with its driver’s side door open. But the vehicle was empty. Nearby, officers spotted a Chevrolet Silverado with its rear driver’s side door open. They also noticed “feet sticking out of the door.” Upon approaching the SUV, a patrolman spotted 35-year-old Jennifer Dorit Weber “lying across the floor of the second row.” The naked Weber was on her back, feet in the air, digitally penetrating herself. Cops say Weber was making nonsensical comments and said she thought she was in St. Petersburg, Florida. Asked what brought her to the Mankato area, Weber replied “to please the boys.” Investigators noted that, “Weber continued to masturbate as she spoke with the officers.” Weber was subsequently booked into the county jail for indecent exposure, narcotics possession, DWI, and entering a vehicle without the owner’s permission. (https://bit.ly/3ozR59n)

Elizabeth Hurley says the reason she prances around in bikinis on Social Media is to promote her swimwear. (https://pge.sx/3wswDKh)

Peloton is building its first American factory in Ohio. (https://bit.ly/3uisLdh)

Over 1,100 pounds of methamphetamine concealed in a watermelon shipment was seized by U.S. Customs and Border Protection officers in California. A CBP canine team sniffed out the meth. (https://bit.ly/3ulEGae)

A Texas woman says she was shot by an off-duty officer in a road rage incident while she was trying to get to the hospital. (https://bit.ly/3yHvS24)

Dinosaurs lived on every continent. Back in their day, dinosaurs lived on every continent on Earth, including Antarctica. The reason we only find their bones in certain places, though, is that weather and soil conditions in those places were just right for the bones to be fossilized. Scientists also speculate that there may be many smaller-sized dinosaurs that we know nothing about because their bones were too small to fossilize well.

A former Israeli sniper is creating paintings with guns by filling plastic bags with paint and then splattering them onto canvases by shooting them with guns. (https://reut.rs/3yqP83u)

A theft suspect in Idaho Falls fell through the ceiling tiles of a local restaurant Tuesday evening while running from officers. The Idaho Falls Police Department was looking for Jesse James Moore, 38, a suspect in two theft cases from earlier that day. The search was a rather unique one, allegedly involving children’s bicycles, stolen deli ham, and the suspect locking himself in a women’s bathroom in an attempt to escape into the ceiling of a Subway restaurant. The search began earlier Tuesday when a woman called officers around 6 p.m. saying someone stole her son’s BMX bicycle at the skate park on Rollandet Avenue. A man, allegedly wearing a Tyrannosaurus rex T-shirt came up to her son and asked to buy the $480 bike. The boy declined and when he turned around for a second, the unknown man got onto the bike and rode away. Then at 9 p.m., the Idaho Falls Police department went to WinCo Foods after a man reported someone had stolen his Harley-Davidson motorcycle after he went inside to buy groceries. In place of the motorcycle, the man discovered the BMX bike that police had been called about earlier in the evening. Additional officers arrived in the area and searched for Moore. The motorcycle owner found the stolen Harley-Davidson parked in front of Planet Fitness across the street from WinCo. The owner said the fuel cutoff switch was on, and the bike would have not run for very long if the suspect did not know this. Officers spotted Moore walking toward the Subway in the same parking lot as the gym. Moore went into the sandwich shop and locked himself in the women’s restroom. Police heard rustling inside, and Moore refused to come out. The owner of the Subway then kicked open the restroom door. Officers rushed inside and found pieces of the ceiling around Moore, who lay on the ground, having fallen from the ceiling. Moore refused to come out of a closed stall, and police pulled him out by his feet. Moore was wearing the same dinosaur T-shirt as reported earlier. Inside the ceiling, officers found Moore’s shoes, a knife, and a large wad of ham wrapped in butcher paper. “The (Subway) employees reported the man had been in the store earlier in the day, several times, and had actually come behind the counter, filled out an application for a job and attempted to help them with service." When Moore left the store, they noticed a stack of deli meat missing. Officers arrested Moore and took him to the Bonneville County Jail. Moore is charged with felony grand theft for the motorcycle and misdemeanor petty theft for the bicycle. He was also charged with misdemeanor malicious injury to property for the damage done to the restaurant, as well as another count of petty theft for the ham. (https://bit.ly/3wv763o)

A driver on one of Japan’s shinkansen bullet trains is facing disciplinary measures after he abandoned his cab to go to the toilet while the train was carrying passengers and traveling at 150km/h. The 36-year-old driver, who has not been named, had a stomach ache and asked a conductor to take his place while he went to the toilet. The conductor, who was not qualified to drive the Hikari-series train, sat in the driver’s seat during his three-minute absence, but did not touch the controls. The incident happened last weekend as the train carried 160 passengers at high speed along the busy Tokaido line, which links Tokyo and Osaka. The driver might have gotten away with his unscheduled toilet break except for the fact that the train was one minute late, which prompted an investigation in a country famous for punctuality. Japan’s super-efficient shinkansen rail network connects cities along the length and breadth of the country, with trains reaching speeds of up to 320km/h. The recent incident is thought to be the first in which a shinkansen driver left the cab while the passenger train was moving. A similar case in 2001 involved a driver who was operating an out-of-service train. Bullet trains have an enviable punctuality rate and an impressive safety record, with no fatalities due to a derailment or collision since they went into service in 1964, just before Tokyo hosted the summer Olympics. A teenage boy died in 1995 after attempting to jump on a bullet train as its doors were closing, and in 2015, a passenger died after setting fire to himself, while a woman in the same carriage died of smoke inhalation. Although passenger numbers have plummeted during the coronavirus pandemic, an average of more than 400,000 people use the Tokaido service daily. By the time the shinkansen marked its 50th anniversary in 2014, the Tokyo-Osaka line had carried a total of 5.6 billion passengers, with trains travelling a cumulative 2bn kilometres, enough to circle the globe 50,000 times. Shinkansen drivers who feel ill are required to report to an operations center and hand the controls over to a qualified conductor, or stop at the nearest station. The driver involved in the recent incident said he did not want to lose time by bringing the train to a halt at the next available stop. “I didn’t report it because it was embarrassing,” he said. (https://bit.ly/34aOcm8)