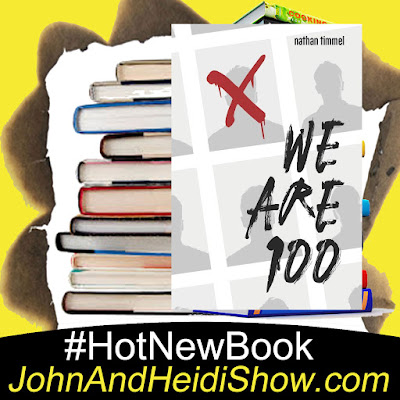 Nathan Timmel, comedian and author of the novel “We Are 100”.

ABOUT THE BOOK
After losing his wife, Evan Francart is depressed. He has an axe to grind with the pharmaceutical company that jacked up the price of her medications, but feels powerless against a billion-dollar corporation. Then he meets Cassandra. She shows Evan a way to both end his life and become a hero. With her guidance, Evan interrupts a company board meeting and blows the building sky-high. As FBI agents Susan Chamberlain and Michael Godwin discover, Evan is the first of many. Ninety-nine more like him wait anonymously in the wings, their targets just as personal as Evan's: the prosecutor who lets rapists walk free, the inept surgeon who maims patients yet keeps operating, the phony evangelist preying on those seeking solace... and that's just the beginning.


A new study from Germany finds that being touched by a humanoid robot makes people happier and more likely to listen to machines. Instead of being reliant on other humans, researchers are hoping that one day robots may be able to fulfill the roles of therapists, personal trainers, and even life coaches.(https://bit.ly/3nUn97N)

According to a study, dogs hate to be hugged.

A suspected drunk driver was taken into custody early Wednesday morning after slamming into a mailbox and two parked cars. The crash was reported just after midnight between Santa Barbara Boulevard and Embers Parkway. Beer cans fell out of the driver’s truck while Cape Coral police officers investigated the crash. The name of the driver and their charges have not been released. (https://bit.ly/2Stgg1v)

The 'Sex and the City' franchise is reportedly replacing Samantha with three new women. (https://bit.ly/3xMq2Md)

Apple has once again snatched up a new Tom Hanks movie for its Apple+ service. The movie is called “Finch” and it’s about a man living in a post-apocalyptic world who builds a robot to take care of his dog once he's gone. No word on when the movie is set. (https://yhoo.it/2RoVlfg)

Red Lobster has released a video teaching high school kids how to turn their cheddar bay biscuits into prom corsages and boutonnieres. (https://yhoo.it/3elAhPQ)

If you think that Early Earth, without industrial pollutants from humankind whatsoever, smelled fresh and natural, you’d be in for a rude and stinky surprise. Scientists say billions of years ago Earth smelled like rotten eggs.

A four-year-old boy in Brooklyn accidentally bought $2,600 worth of SpongeBob Popsicles on his mother’s Amazon account. (https://bit.ly/3h82BHd)

Bill and Melinda Gates reportedly planned to make their stunning divorce announcement in March — and she hoped to avoid the media glare by renting a remote, private island in Grenada for the family. Sources told TMZ that Melinda rented Calivigny Island for a whopping $132,000 a night for her and the couple’s children, as well as their significant others. (https://bit.ly/3eXbZLf)

Most laughter isn't because things are funny. Every culture in the world laughs, but surprisingly, most of our laughter isn't necessarily a response to humor. Less than 20 percent of laughter comes after jokes, according to neuroscientist Robert Provine; the rest is a reaction to regular statements and questions like, "How have you been?" The ensuing laughter, however brief, helps form social bonds since people who laugh together grow closer.

A Chinese television brand is under fire for spying on its users.

A 22-ton Chinese Rocket crashed returned to earth on Saturday, crashing into the Indian Ocean after fears it could land in a major city. (https://on.wsj.com/3nZ2I9J)

If there’s one thing independent young people and seniors both have in common, it’s the need for affordable housing. It’s this search to find a low-cost apartment that led one teen to accidentally move into a retirement community. 19-year-old Madison Kohout told Insider.com she was moving from Oklahoma to Arkansas and was searching for a two-bedroom apartment online. After finding a “super spacious” apartment that was listed at $350 a month, Kohout said she signed the lease without looking at it in person and moved in days later. While she found it odd her neighbors were all over 65 years of age, it didn’t click until a week after her move when she noticed the retirement home sign outside her building. “The first week of moving here was crazy!” Kohout told Newsweek. “I was busy with finding a job and setting up my apartment, I didn’t even notice! I thought it was a bit weird that all of my neighbors were significantly older than me.” Based on her TikTok observations, which have no gone viral, her new living situation has largely been positive with her noting in one video that her home is “always super quiet” because her neighbors are usually asleep by the time she gets home. (https://bit.ly/2QQxqFR)

A heartless crook stole a prosthetic arm belonging to a college baseball pitcher in South Dakota. Parker Hanson’s artificial limb was in his unlocked car outside his home when a thief was caught on surveillance camera stealing it early Monday morning. “To the person in Sioux Falls last night who felt the need to steal other people’s property, I hope those prosthetic arms and attachments bring you more use than they brought me,” Hanson, a baseball player at Augustana University, wrote on his Facebook page. Hanson’s prosthetic arm and other equipment were inside a tan Nike backpack. The bag was found down the block from Hanson’s home Monday night, but the arm was not inside, the athlete said. Hanson told the Argus Leader that the prosthetic arm is specially designed for him. In place of his missing one, Hanson is using a backup prosthetic that doesn’t fit as well, he told the newspaper. (https://bit.ly/3nTPwTs)