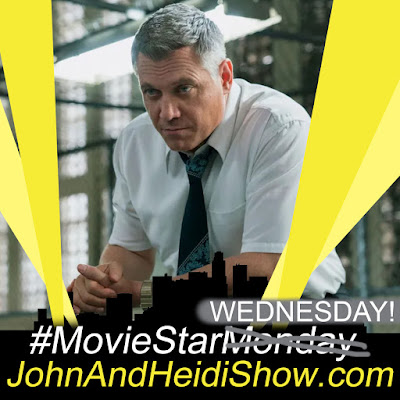 Today we visit with Holt McCallany (Casualties of War, Alien 3, Three Kings and Fight Club, Mind Hunter) We're going to visit about his new action thriller WRATH OF MAN. It was released in theaters on May 7, 2021.

A new survey of 2,000 Americans finds that roughly 1 in 3 people are ready to dump their favorite streaming services such as Netflix and Hulu over “lackluster shows.” Which is truly incredibly when you consider the sheer volume of content. (https://bit.ly/3obodEn)

A 48-year-old Lakeland man was arrested for driving under the influence of alcohol and possession of cocaine. 48-year-old Marti Martinez was found sleeping behind the wheel of a pickup truck on the side of Interstate 75. The deputy said he opened the truck’s driver-side door and woke Martinez up. He saw a white powdery substance on Martinez’s nose and noticed a strong smell of whiskey coming from his breath. Martinez allegedly had bloodshot watery eyes, was speaking slurred Spanish, and had trouble performing tasks. When the deputy asked Martinez to get out of the vehicle, he forgot to put the car in park and it rolled forward. The deputy had to put the vehicle in park so Martinez could exit. After failing multiple field sobriety tests, the deputy arrested Martinez under probable cause for driving a car under the influence of alcohol and drugs. While Martinez was in the back of the patrol car, the deputy watched as he pulled two baggies of a white powdery substance out of his pockets. As the deputy was completing paperwork, Martinez shoved both bags up his anus. After being transported to the Naples Jail Center, Martinez was required to do a strip search, where the baggies were recovered by deputies. He was officially arrested for DUI, possession of cocaine, and evidence tampering.(https://bit.ly/3hszDCb)

A new report claims Alex Rodriguez was shocked to learn that after their breakup, J-Lo had been seen together with Ben Affleck. (http://hrld.us/3o7Uo7C)

Grimes revealed that she was hospitalized for a panic attack this week following partner Elon Musk’s “Saturday Night Live” debut. Grimes had a cameo on the show, so maybe she suffered from anxiety over her performance.(https://pge.sx/3uGDmjp)

The Houston Tiger that had been missing for over a week was captured on Saturday. (https://bit.ly/34175rL)

A Florida Woman was caught posing as a high school student so she could get more Instagram followers. (https://bit.ly/2R9OKpA)

The Independent Panel for Pandemic Preparedness and Response (IPPPR) has concluded that the catastrophic scale of the COVID-19 pandemic could have been avoided — but a “toxic cocktail” of “delay, hesitation, and denial” aided its rampant global spread. The report was ordered by World Health Organization (WHO) member-states last May as the pandemic first spread rapidly across the globe. (https://bit.ly/3w3J9j4)

Authorities in Texas are on the hunt for a Tiger that got loose in a Houston Suburb. (https://bit.ly/3ocACb5)

A 78-year-old woman in Alabama is being celebrated for graduating college. (https://bit.ly/3y5SA3o)

A good Samaritan was bitten on the New York City Subway after attempting to stop a man from harassing a woman. Witnesses say the man was also choked by the attacker. (https://bit.ly/33L9uqj)

Pro baseball once had women players. While there are currently no female players in Major League Baseball, there have been plenty of women in professional men's leagues. The first was Lizzy Arlington, who pitched during the ninth inning for the Reading Coal Heavers in 1898 and won her team the game. A little over 30 years later, an African-American woman, Jackie Mitchell, pitched against the Yankees during an exhibition game, striking out both Babe Ruth and Lou Gehrig. What's more impressive: Mitchell was 17 years old at the time.

A 9-year-old DJ in Dubai who placed fourteenth in the World DJ Championships, says her goal is to one day outrank her father who is also a DJ. (https://bit.ly/33D23S1)

This “freebird” could wind up in a cage after stealing about $12,000-worth of Lynyrd Skynyrd memorabilia in Florida. 38-year-old William James Walker is wanted for the theft of a trailer filled with rock relics — which were intended to be sold for charity last month. The trailer disappeared from the parking lot of a Days Inn hotel in Orange Park on April 9th, just one day before the items inside were set to be auctioned off at a cancer benefit. The Jimmie Van Zant Cancer Benefit in Middleburg was set to honor late musician Jimmie Van Zant — a cousin of Lynyrd Skynyrd’s Donnie, Johnny, and Ronnie Van Zant — who died of liver cancer in 2016. The stolen items included irreplaceable mementos from the Southern rock band, as well as a 1957 Les Paul guitar signed by musicians Gregg Allman, Brian Howe, Butch Trucks, and others. “We have guitars that are signed by a lot of the band members. A lot of them aren’t even alive anymore,” organizer Joey Willut told local outlet News4Jax. “It’s stuff that can’t be replaced.” The Orange Park Police Department on Friday said it had obtained an arrest warrant for Walker, charging him with felony grand theft.(https://bit.ly/3bghNyB)

A Bronx panhandler attacked a man who wouldn’t give him $1, knocking out two of the victim’s teeth with one punch. The 29-year-old victim was walking with friends at 4:50 a.m. on April 24th when he passed the panhandler who asked him for money. When the man said he had nothing to spare, the suspect socked the victim on the left side of his face, splitting the man’s lip and knocking out two teeth. The suspect, believed to be in his 30s, ran off empty-handed. There have been no arrests. The victim was attacked about three blocks from his home. EMS took him to Lincoln Hospital, where he was treated and released. Police on Friday released surveillance images of the suspect in the hopes that someone recognizes him. (https://bit.ly/33tzkyQ)

'They Needed The Money More Than I Did': Iowa Cubs Owner Kept All Full-Time Employees On During Pandemic
https://www.sunnyskyz.com/good-news/