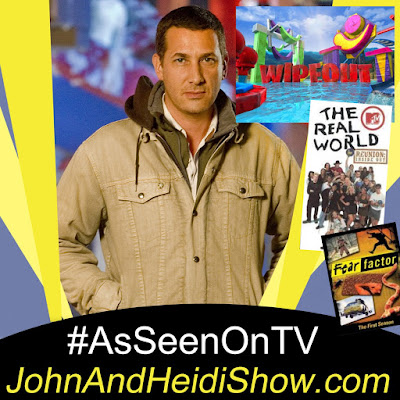 Today we visit with Matt Kunitz. In 2008, the LA Times dubbed Matt Kunitz “the king of reality TV” after having served as producer and showrunner for the first five seasons of MTV’s landmark series The Real World; being the driving force behind all seven seasons of Fear Factor which broke decades-old record ratings for NBC; and then creating ABC’s hit extreme obstacle course series Wipeout, which was re-created in 40 countries, making it one of the most popular game shows in the world.

Now, Matt is behind the newly imagined relaunch of Wipeout on TBS which premiered earlier this month and secured its spot as cable’s highest-rated new comedy series in 2021. Hosted by John Cena and Nicole Byer, the new Wipeout pushes contestants to even greater extremes while still delivering big laughs (the show’s iconic big red balls are back which often lead to the most epic fails!). https://www.tbs.com/shows/wipeout

A new survey finds that, after a turbulent 2020, four in five millennial parents are completely reevaluating how they parent their children. (https://bit.ly/3noeYjP)

Despite its negative reputation, a new study finds gossip can be a good thing for people to spread. The study reveals that gossip can actually serve to create social connections. While many people associate gossip with trading negative secrets, researchers add it can also include small talk online, like having a private Zoom chat. (https://bit.ly/2SbN2UI)

The evidence was as plain as the cocaine on his face. A North Carolina man who cops found with a powdered nose is behind bars on drug possession and other charges following a confrontation last Tuesday. Responding to a property damage call in Lenoir, a city about 75 miles from Charlotte, an officer arrested 30-year-old Jamichael Walton for fleeing on foot, as well as “pulling away and kicking.” After being handcuffed and placed in a squad car, Walton allegedly threatened the arresting officer. “When I get out, I’m going to shoot up this car and all y’all,” Walton said. Walton was also hit with a fourth charge, felony possession of cocaine. Police reports and court filings do not indicate whether investigators recovered cocaine beyond that seen beneath Walton's nasal cavity. Walton is being held in lieu of $12,500 bond on the assorted charges. He is scheduled for a May 5th District Court appearance. Walton’s docket sheet includes two other separate pending cases, one for marijuana possession and the other for reckless driving and driving while his license was revoked due to a prior impaired driving conviction.(https://bit.ly/2PdQ1ef)

Alex Rodriguez — who posted before-and-after pics of his weight loss this week with the caption “Left the Dad-bod in 2020” — has been participating in a $4,000 workout program. (https://pge.sx/3u5Gfd5)

John Mayer is getting his own TV talk show. (https://bit.ly/3nFgbU0)

“Pete Davidson Gets His Own Apartment”
After living for the last three years in the basement of a New York home he bought for his mother, Saturday Night Live star Pete Davidson has his own place. Pete recently paid $1.2 million for a two-bedroom apartment on Staten Island and has already moved in. The apartment includes an open floor plan with city and water views. https://www.toptenrealestatedeals.com/

Park Rangers discovered a 40-acre growth of Marijuana in Death Valley National Park near the border of California and Nevada. (https://bit.ly/3t7hNHf)

Walmart is accusing the Yeezy brand of stealing its logo. (https://bit.ly/3u1brKG)

Thousands of genetically modified mosquitoes have begun to be released in Florida this week as part of an effort to combat a disease-spreading species of the insect. The buzzy project, from British biotech company Oxitec, aims to curb the population of Aedes aegypti mosquitoes, which can spread diseases such as Zika and dengue fever. (https://bit.ly/32ShOEe)

Scientists have discovered a new species of venomous tarantula in Florida that can live for two decades. The Pine Rockland trapdoor spider was first spotted on the grounds of Zoo Miami in 2012, but it wasn’t until this year that researchers identified it as an entirely new species. (https://bit.ly/2SbpzmJ)

Abraham Lincoln's bodyguard left his post at Ford's Theatre to go for a drink. You already know that Abraham Lincoln was shot and killed by John Wilkes Booth while watching a performance at Ford's Theatre in Washington, D.C., on April 14, 1865. But what you might not have been aware of is that the president had a bodyguard named John Frederick Parker with him on that fateful night, according to Smithsonian Magazine. Unfortunately, Parker was a police officer with a less-than-stellar reputation. After arriving three hours late for his shift, the officer left his post protecting the president to get a drink at the Star Saloon next door to the theatre. It was during this time that Booth entered the box seats where Lincoln was sitting and shot the president.

A new report claims over 90% of Venezuelan households are struggling to find food. (https://bit.ly/3tWChDz)

Two intruders entered a closed Denny’s restaurant and made themselves eggs before being chased from the eatery by a worker who had been alerted to the predawn trespassing. According to cops, the two offenders first entered the Denny’s in Evansville at 2:02 a.m. and “went into the kitchen and prepared some eggs.” The duo departed a few minutes later, but returned to at 2:58 a.m. and “made some more eggs” before departing Denny's at 3:04 a.m. A police report notes that the pair did not force entry into the eatery -- which closed at 11:00 p.m. -- and that “the door seemed to be open both times.” After the duo made their second entry, a Denny’s worker “arrived on scene, confronted them, and told them to leave.” The report does not indicate how the worker became aware of the intrusion. The suspects, who departed the area in an auto, were recorded inside the Denny’s by surveillance cameras. If identified, the pair could face misdemeanor theft and criminal trespass charges. The report indicates that Denny’s suffered a “total estimated loss” of $1, which appears to represent the cost of the purloined eggs. (https://bit.ly/3eyq6Gy)

A VHS movie rented more than 20 years ago has come back to haunt a woman in Texas. The problem: She never returned the tape she rented in Norman, Oklahoma which landed one woman in serious legal trouble. “The first thing she told me was felony embezzlement, so, I thought I was gonna have a heart attack,” said Caron McBride. It was a moment of disbelief for McBride, as she was talking to the Cleveland County District Attorney's Office this week, when she learned she is a wanted felon for never returning “Sabrina the Teenage Witch” on VHS 21-years ago. A movie she never even rented. “I had lived with a young man, this was over 20 years ago. He had two kids, daughters that were 8, 10, or 11 years old, and I'm thinking he went and got it and didn't take it back or something. I don't know. I have never watched that show in my entire life, just not my cup of tea,” she said. The DA 's office said it decided to dismiss the case against McBride, but says she still needs to have the case expunged in order to clear her record. (https://bit.ly/3et0Gu0)