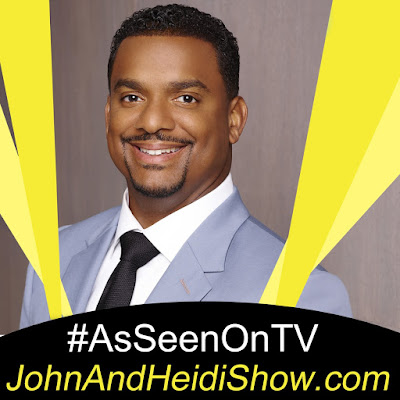 Today we visit with Alfonso Ribeiro about his new special series with Nat Geo called America’s Funniest Home Videos: Animal Edition. The series premiered Friday, June 11. “America’s Funniest Home Videos” has been a household staple since its inception, providing hilarious entertainment from some of the most happy coincidences and epic fails in television history. But there’s no question that animal videos featuring furry friends and scaly celebrities are the most entertaining yet. A spinoff of the ABC hit, “America’s Funniest Home Videos: Animal Edition,” hosted by Alfonso Ribeiro, presents knee-slapping, tear-jerking animal humor to Nat Geo WILD! https://www.nationalgeographic.com/tv/shows/americas-funniest-home-videos-animal-edition

What was the point of these studies?

• Scientists at Birkbeck College in England discovered that dogs can “catch” yawns from people. A 29-dog study found that after they made eye contact with a yawning person, 21 of the dogs yawned as well.

• University of London researchers discovered that as male college professors ascend the academic ladder they are more likely to grow beards.

• French physicists looked into why when dry spaghetti is bent, it breaks into lots of smaller pieces, instead of cleanly in half.

A California man climbed into a large fan at a vineyard — and remained stuck for two days until authorities found him there with a bunch of meth. The 38-year-old was discovered Tuesday by a deputy responding to a call about a suspicious vehicle parked near the Santa Rosa winery. After spotting a hat on a piece of farming equipment, the deputy looked inside and found the man wedged inside. Asked why he’d decided to go into the shaft of a vineyard fan, the man “indicated he liked to take pictures of the engines of old farm equipment,” the statement said. But authorities noted that the farm equipment wasn’t antique — and that the man “had far more methamphetamine than camera equipment.” “The motivation to climb into the fan shaft remains a total mystery,” the sheriff’s office said. The man required medical treatment but is expected to recover. He will be charged with trespassing and drug possession, as well as violations of a probation case. “Lucky for this guy the citizen called in to report his vehicle, otherwise this story ends with a far more tragic outcome,” the statement said.(https://bit.ly/3g9WRMo)

A new report claims Kim Kardashian is unbothered that Kanye West is in a new romance. (https://fxn.ws/2TYG0Ub)

Jeff Daniels is returning to Broadway in "To Kill A Mockingbird." (https://nyti.ms/3v5Y5wo)

Two people tested positive for the Coronavirus on a fully vaccinated Royal Caribbean Cruise over the weekend. (https://bit.ly/3gkdgOp)

While the Tokyo Olympics are still on, the World Shin-kicking Championships have been canceled again in 2021. The annual event in England pits two opponents against each, kicking each other’s shins until only one person is standing.

In Hungary an 18-year-old man was in court to be sentenced after being found guilty of robbery. When he heard the judge say he’d be locked up for 30 years, he went nuts and attacked the judge. When police finally pulled him off, his attorney explained that the sentence was for 3 years, not 30. The defendant apologized, explaining that he had a hearing problem.

A group of Scientists are experimenting with dosing lobsters with marijuana so that they're less aware that they're being cooked. (https://bit.ly/3x9EGw0)

A tick bite can make you allergic to red meat. Plenty of people have food allergies, but few are the result of an insect bite. In a strange and growing trend, some people who get bitten by the Lone Star tick can develop a sudden allergy to red meat. Beef, lamb, and pork (which are technically classified as red meat) can make people with this allergy experience headaches, sneezing, a runny nose, and nausea. In severe cases, it can cause the person to be unable to breathe. For some sufferers, the allergy fades over time, but for others, it's permanent.

China released new images of Mars that were taken by its Zhurong rover. (https://bit.ly/2Sve362)

An airline crew called on passengers on a cross-country flight to help stop a fight that broke out in the cabin, forcing the Delta Air Lines jet to divert its route Friday. Flight attendants on Flight 1730 from Los Angeles to Atlanta called on able-bodied men to help subdue an “unruly” passenger who started a fight, according to a report and video of the incident, which was posted on social media Friday. Despite social media posts suggesting that the passenger may have tried to breach the cockpit, a spokesperson for Delta denied that was the case, although the flight was eventually diverted to Oklahoma City. The airline later identified the unhinged traveler as an off-duty flight attendant — and said the person had tried to take control of the plane’s PA system before others on board intervened. The disruptive passenger’s name wasn’t released. The FBI took the person into custody. “Thanks to the crew and passengers of Delta Flight 1730 (LAX to ATL) who assisted in detaining an unruly passenger as the flight diverted to Oklahoma City (OKC),” the spokesperson said in a statement. “The aircraft landed without incident and the passenger was removed by law enforcement. We apologize to our customers for the delay and any additional inconvenience this caused.” (https://bit.ly/3izX9Ol)

No one was injured after a blind man got behind the wheel of a truck, and crashed into the front of a grocery store Tuesday morning. KPD says 62-year-old Christian Searcy crashed a truck into the front cart stall at the Safeway in Kennewick just before 8:00 a.m. Authorities say Searcy had been in the parking lot overnight but are unsure why he then got behind the wheel. It's also unclear exactly what he was doing in the parking lot overnight. There's minor damage to a pillar at the front of the store, and to the front of the truck. Police also say Searcy had a knife, but put it away when officers asked him to do so. Searcy is facing a possible charge of suspicion of driving with a suspended license. This is an ongoing investigation. (https://bit.ly/3592aFI)