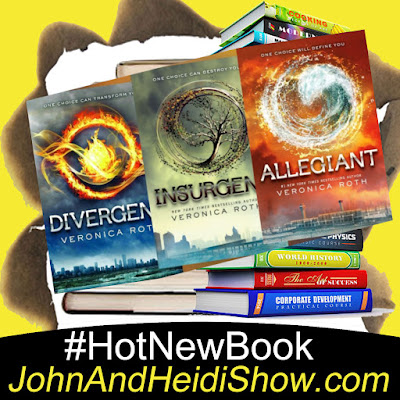 Veronica Roth was a senior at Northwestern University when she wrote her first book Divergent, the first part of a trilogy that would go on to sell more than 42 million copies and spawn three hit films starring Kate Winslet and Shailene Woodley (Veronica sold the film rights within months of graduating college.). The book series – about a futuristic, dystopian world in which those entering adulthood must choose one of five factions and commit to it for life – is now celebrating its 10th anniversary, and as the films continue to air on TV and streaming services, fans across the world on social media continue to keep the Divergent world alive.

A survey asking people what their most hated lawn chore was found that 35 percent said weeding, 28 percent said fighting pests.

A man told troopers during a traffic stop in Collier County that he was driving erratically because his truck was “struck by lightning.” 38-year-old Steve Stinton is accused of driving drunk on I-75 near mile marker 71. A trooper allegedly spotted Stinton with his turn signal on, swerving between lanes. When the trooper pulled him over, Stinton had alcohol on his breath, slurred speech, and had difficulty located his insurance paperwork. Stinton told the trooper his truck pulls slightly to the left because it was “struck by lightning.” Despite not having a dentist or a doctor, he also claimed he might be diabetic because he “gets tingling in his hands,” the report states. Then Stinton told the trooper he’s had several sports-related concussions, though none in the recent past. He denied drinking alcohol, saying he had only eaten peanuts and cracker jacks. Stinton failed the sobriety test, and the trooper arrested him. He was booked into the Collier County Jail and is facing DUI charges.(https://bit.ly/3wIdO6f)

Despite Amazon's acquisition of MGM, the long-awaited James Bond film “No Time to Die” will still receive a theatrical release later this year. (https://bit.ly/3vsqo9n)

Pauly Shore is campaigning to make a sequel to “Encino Man” with Brendan Fraser. In the original buddy comedy, a pair of teenagers find themselves unexpectedly saddled with an unfrozen caveman. (https://bit.ly/34CVtvk)

Education researchers say the subject kids most had trouble with while attending school from home was mathematics.

All that stuff in your life? It’s not making you any happier. In a survey of over 10,500 people, numbers are showing that 50% of people would live happily without most of their possessions. And two-thirds of the consumers polled make it a point to get rid of unneeded stuff at least once a year.

The legend of the Loch Ness Monster goes back nearly 1,500 years. There's a tale written in the year 565 A.D. that speaks of an Irish monk traveling through Scotland. While there, Saint Columba heard stories of a "water beast" that attacked and killed the local people when they went in the river. Wanting to help, the monk used his friend as bait to lure the beast into sight, at which point Columba commanded it to "go no further," and the creature stopped and swam back upstream. That river is now known in Scotland as the River Ness, which flows out from the famous Loch Ness.

A man in Spain was found dead inside a statue of a dinosaur after police say he most likely got stuck inside while trying to retrieve his phone. (https://bit.ly/3hTANqr)

A man is accused of collecting disability benefits even though he owned a limousine company and started bodybuilding. 50-year-old Anthony Ragusa was arrested and charged by the office of the New York attorney general. The defendant, a resident of the town of Huntington, applied for benefits in 2013, claiming he was injured badly while on the job as an electrician. He could not bend over to put on shoes, walk for more than fifteen minutes, sit for more than thirty minutes, and was in so much pain he could not work at all, he allegedly said. But documents from the state Department of Transportation and minutes from a town hearing in 2012 showed that Ragusa owned the White Star Limousine company in New Hyde Park. On top of that, video and pictures from his wife’s Instagram account showed that he began bodybuilding in 2017. Prosecutors described him as being an “avid weightlifter” depicted “lifting heavy weights.” Ragusa was arraigned on a count each of grand larceny in the second degree, and offering a false instrument for filing in the first degree.(https://bit.ly/3bSFMDY)

A Texas law firm said it has fired a female employee after a video surfaced showing her jumping into a monkey habitat at the El Paso Zoo. The Lovett Law Firm told the ABC affiliate that Lucy Rae was a litigation assistant in its personal injury division. El Paso zookeeper Mason Kleist told KVIA that Rae endangered herself and the two spider monkeys in the habitat. “These are primates we're talking about, they could do some substantial damage to you,” Kleist told the station. “They may be small ... but they can take you to the ground if they wanted to.” Kleist said that feeding the monkeys could have endangered them by disrupting their diet. El Paso police said there was the potential for charges to be filed against Rae. The zoo director also said they planned to press charges against the woman. (https://bit.ly/3oMJJ2k)