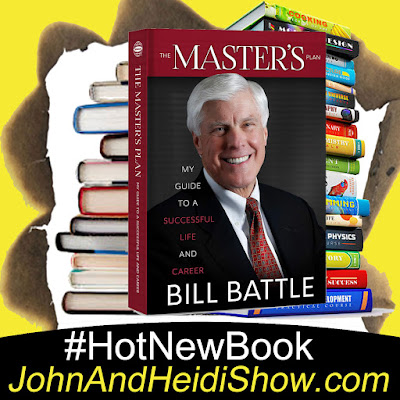 Today we visit with Coach Bill Battle. He went from a high school football team

that won six games in four years to playing at The University of Alabama under Coach Paul “Bear” Bryant. Those Crimson Tide teams posted a 29-2-2 record and won a National Championship. Having learned success under Coach Bryant and three other Hall of Fame football coaches, Battle blazed a trail in the business world after a decade of coaching. First Battle helped with the growth and development of a startup window manufacturing company, learning valuable lessons in business along the way. Battle then launched The Collegiate Licensing Company (CLC) and built it into one of the largest trademark licensing companies in the United States. CLC helped create a major source of revenue for colleges and universities, and helped them protect, develop and monetize university brands, paying them over a billion dollars during Battle’s tenure of oversight. When his alma mater called in 2013, Battle returned to Alabama to serve as Director of Athletics. This book captures Battle’s lifelong journey while also providing detailed guidance to anyone desiring to start their own company. Football fans will also enjoy the behind-the-scenes stories about Coach Bryant and his quotes, and Battle’s coaching career from Oklahoma to Tennessee. An aspiring person who wants to run a business can learn lessons in leadership, how to write a detailed business plan for success, and how to make your employees love being part of the team!

The Master’s Plan: My Guide to a Successful Life and Career
AVAILABLE NOW - https://amzn.to/3pquz3a

A new study claims you can feel three years younger in just eight weeks without taking ANY DRUGS. The study claims that eating healthy, getting exercise, and sleeping more will reverse the aging process. (https://bit.ly/2S0N5D5)

A new study published in Science Advances claims that climate scientists have overestimated the warming effect of Greenhouse Gases. This is a major breakthrough in the Climate Change narrative. (https://bit.ly/3wMxHsy)

A Florida Man struck his daughter in the face with a slice of pizza, resulting in his arrest for battery. Cops responding to a disturbance call at the victim’s Vero Beach home discovered the 20-year-old with “what looked to be tomato sauce on the left side of her face.” Inside the residence’s front door, the ground was “covered with pizza toppings.” The victim told police that her father, 41-year-old Tyler Worden, came to her home Sunday afternoon to drop pizza off. But when she told Worden that she was not feeling well and asked him to leave, he began arguing with her. When the woman sought to close the front door, Worden allegedly threw a pizza slice at his daughter, striking her in the face. After the woman dialed 9-1-1, cops arrived at the residence and questioned Worden, who admitted throwing the pizza, but claimed he thought the door was shut at the time. An officer noted that he detected a strong odor of an alcoholic beverage on Worden’s breath. Worden was arrested for battery and booked into the Indian River County jail on the misdemeanor charge. He was released from custody upon posting $500 bond. Worden, who works as a chef, is scheduled to be arraigned on June 15th. (https://bit.ly/3vxsioY)

The Love Boat captain Gavin McLeod died on Saturday at the age of 90. (https://bit.ly/3pb1TuT)

Australian singer Cody Simpson told “60 Minutes” that his relationship with Miley Cyrus was just “one of those phases.” (https://pge.sx/3yOvSgF)

The Tiger seen walking around a Houston Neighborhood has been captured and transported to the Cleveland Armor Ranch in Texas. (https://bit.ly/3urahYq)

General Motors is building a lunar rover to drive astronauts across the moon. (https://bit.ly/3g28h3n)

The CDC is warning that birds can carry dangerous germs even if they look healthy and clean. (https://bit.ly/3cgTi4T)

A California man had to be rescued after he parachuted out of a plane and got stuck on some power lines. (https://bit.ly/3i1CtOO)

While men still dominate backyard cooking, 30 percent of grilling duties are shared by both husband and wife. Still men wield the the tongs 48 percent of the time.

Nutmeg can be fatally poisonous. A little dash of nutmeg in a pumpkin pie or on your egg nog can give it some extra flavor and a lovely, spicy scent. Too much nutmeg, however, can be toxic. Two to three teaspoons of raw nutmeg can induce hallucinations, convulsions, pain, nausea, and paranoia that can last for several days. Actual fatalities are rare, but they have happened.

Dateline.... CHINA
China is easing its two child per family birth control policy in an effort to combat their aging population. (https://bit.ly/3fZxn2W)

A woman who was missing for three weeks and then rescued from a Florida storm drain found herself in another underground tunnel system in Texas over the weekend. 43-year-old Lyndsey Kennedy climbed out of a 6-foot drain pipe Saturday night and was taken to a hospital. Kennedy had been checked into a rehabilitation facility in Texas when she wandered off. She was last seen in the area near the Dallas suburbs of Grand Prairie and Arlington. Kennedy’s friend Brady Morgan told the news outlet that Grand Prairie officers spotted her. When they approached her, she slipped into a nearby storm drain. Her family tracked her using an app on her cellphone that noted her last location prior to going underground. As a precaution, her loved ones dropped bags of food and Gatorade in nearby manholes in an effort to sustain her. In March, Kennedy was pulled out of a storm drain while naked in Florida’s Delray Beach after having been missing for three weeks. She told authorities she became trapped while exploring a tunnel she found while swimming in a canal near her boyfriend’s home.(https://bit.ly/3uHqIzV)

A member of Canada's Parliament apologized after he was spotted urinating during a House of Commons meeting on Zoom. Someone participating in last week’s meeting spotted MP William Amos, a member of the ruling Liberal Party from Quebec, urinating, even though the lawmaker apparently was not on the primary screen at the time. “Last night, while attending House of Commons proceedings virtually, in a non-public setting, I urinated without realizing I was on camera,” Amos said in a statement Thursday. “While accidental and not visible to the public, this was completely unacceptable, and I apologize unreservedly.” The proceedings are streamed online to world because of the pandemic, although only active speakers are shown on screen. Amos, 46, who was captured nude during another House of Commons virtual meeting in April, said he would temporarily relinquish his committee duties and his role as parliamentary secretary to the minister of innovation, science and industry to “seek assistance.” (https://yhoo.it/3uCo1Q2)

The Villages in Irving, Texas ….. REHAB