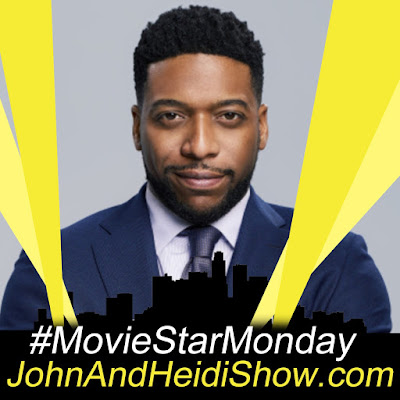 This #MovieStarMonday we visit with Jocko Sims. (Dreamgirls, Jarhead, Dawn of the Planet of the Apes, Crash)

After causing a disturbance at the drive-thru window, a McDonald’s customer broke the window and crawled through the opening into the restaurant, where he attacked a female manager. Investigators allege that 33-year-old My-chael Jordan was asked to leave the premises of the Pinellas Park eatery around 4:00 a.m. Sunday following a flap at the 24-hour drive-thru. But instead of departing McDonald’s, Jordan, who lives two miles from the restaurant, “broke the drive-thru window, crawled in through the window and grabbed and pushed” the 53-year-old employee. When cops subsequently confronted Jordan, he allegedly fought with three officers and was “tased multiple times with no effect.” “All three officers suffered scrapes and cuts” during the struggle with Jordan, who allegedly spit on the Pinellas Park Police Department cops. Police noted that Jordan showed an “indication of drug influence.” Jordan was arrested and charged with four felonies: burglary with assault or battery and three counts of resisting police with violence. He is locked up in lieu of $155,000 bond. (https://bit.ly/3idQcCg)

A Royal Biographer claims that Meghan Markle and Prince Harry’s decision to name their newborn Lilibet Diana Mountbatten-Windsor is “rude” towards Queen Elizabeth II. The biographer, Angela Levin, suggested the decision was a bad idea because the private nickname was bestowed to Elizabeth by her late husband, Prince Philip. (https://pge.sx/2T6CUNi)

A trio of women got the experience of a lifetime when their yellow float was surrounded by a pack of hammerhead sharks during a beach trip in Florida. In a photo posted online, one of the ladies can be seen drinking some sort of alcoholic beverage. (https://bit.ly/3itvKgJ)

The Milwaukee Zoo has released a viral video showing penguins chasing and popping soap bubbles with their beaks. (https://rb.gy/31hxk6)

Russian Scientists have revived a 24,000-year-old organism that had been frozen in the Siberian permafrost. (https://rb.gy/8wruzo)

A dental student has gone viral on TikTok after revealing that a dentist might be able to tell whether a patient is pregnant just by looking at their mouth. The student explains that there are a few indicators in a patient’s mouth that may reveal a pregnancy, including nausea and enamel erosion and “pregnancy gingivitis,” which she said is seen in up to 30-50% of expectant women. (https://fxn.ws/3zdW5FF)

The Queen has some hidden hideaways. Since the early 13th century, the city of London has officially paid rent to the Crown for two small pieces of property. Fortunately for the city, the price has stayed the same for more than 800 years: one knife, one ax, six horseshoes, and 61 nails, presented every autumn in the Ceremony of Quit Rents. Although one of these properties is located in the Moors in Shropshire and the other is near the Royal Courts of Justice in the city itself, no one knows the exact location of the Queen's land.

A famous rat is being retired and praised as a hero in Cambodia after spending years sniffing out landmines. (https://rb.gy/yqvyca)

A mayoral hopeful in Albuquerque was punched at a campaign event by a man who was also accused of flying a drone adorned with a dildo around the candidate while he was on stage. It’s the second time the “Dongcopter” — complete with its own Twitter account — has harassed a New Mexico politician in recent days. Bernalillo County Sheriff Manuel Gonzales III, who was not injured, brushed off the brazen Tuesday night stunt as the work of “political operatives.” The incident, which was partially captured on video, happened as about seventy people gathered to hear the Democrat speak at the Revel Entertainment Center. The venue’s owner confiscated a drone attached to a sex toy that was flying over the stage while the candidate spoke, and 20-year-old Kaelan Ashby Dreyer tried to get it back. A scuffle ensued and Dreyer threw a punch at the sheriff’s arm while reportedly yelling “he’s a tyrant.” The suspect was arrested on charges of petty misdemeanor battery and misdemeanor resisting, evading or obstructing an officer. (https://bit.ly/3ifrCBa)

A Texas man has been fired from his job as the chief of technology and innovation for a local school district after he was caught selling district-owned iPads. According to News 4 San Antonio, the official was caught when a local family answered a Facebook Marketplace ad and purchased multiple iPads from him in a transaction that entailed meeting him in a parking lot. Once the family's mother realized the iPads were "a type marketed to schools," she searched the man's name and discovered he worked for the school district. She notified the TV station, which discovered a video of a school board meeting in which the same man had recommended that the district spend $483,000 on iPads and other equipment. (https://bit.ly/3uTZJkE)

Over 45 Dogs Rescued From Overcrowded Shelter And Flown To Forever Homes
https://www.sunnyskyz.com/good-news