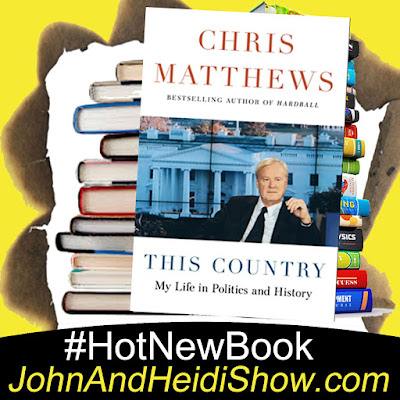 Chris Matthews – This Country, My Life In Politics and History.

Doctors are warning of a huge spike in STD’s now that cities are re-opening. (https://bit.ly/3uW9oay)

A survey in the Wall Street Journal found that sexting among teenagers is at its highest point ever. (https://on.wsj.com/2SfrKWr)

That’s a lot of marijuana! Cops in Georgia arrested four people who tried to carry off 174 pounds of marijuana stuffed into suitcases at an airport in Atlanta. Drug-sniffing dogs zeroed in on the suspicious suitcases following a flight from Seattle which landed at the Hartsfield-Jackson International Airport. Transporting marijuana over states lines is still illegal in most instances, even as individual states rapidly decriminalize and legalize weed. Sergeant John Chafee of the Atlanta police said all four suspects claimed someone else had packed the bags, or that they were picking up the suitcase for someone else. 47-year-old Nicole Golden of Columbia, S.C., was found with 22 pounds of pot and was charged with trafficking marijuana. 29-year-old Naly Tong and 33-year-old Keomanyvanh Tong allegedly had a total of 89-pounds of pot between the two of them. Each is accused of retrieving one suitcase from baggage claim. Pot was also found in other bags they had with them. 32-year-old Jarvis Sheppard was nabbed after retrieving two bags from baggage claim, police said, found in possession of 63 pounds of marijuana and charged with trafficking the drug. A total of seven suitcases were confiscated.(https://bit.ly/3v1iGBP)

Steven Seagal has a new role as the face of a Russian political party that supports that country’s president, Vladimir Putin. The Michigan-born Seagal has repeatedly praised fellow martial arts enthusiast Putin’s leadership of Russia. (https://bit.ly/3i6yaSu)

“Friends” actor Matthew Perry has split up with his fiancée. (https://cnn.it/2S3GuI0)

Kim Kardashian says she feels like a failure over her divorce from Kanye West. (https://bit.ly/3w3nloh)

Jeff Bezos has announced that he plans to launch himself into space. (https://cnn.it/3w43SEb)

Apple has paid a multimillion-dollar settlement to an Oregon woman who sent her iPhone in for repair and had her private racy images and a sex video from the device posted online by repair technicians. (https://bit.ly/3w5vhFI)

A Giant sinkhole has formed in Central Mexico and has now become a huge tourist trap. (https://bit.ly/3giVpWP)

Meghan Markle’s debut children’s book, “The Bench,” failed to top the bestsellers’ list in the UK on its release date. Markle, who welcomed her second child with husband Prince Harry on Friday, made it to the No. 205 spot on the UK Amazon chart. (https://pge.sx/3ctJSTo)

24-year-old New Zealand singer Lorde showed of her backside in a beach photo to promote her new song “Solar Power.” As reported by Vulture, Lorde told fans in May 2020 that she was working on new music, a process delayed by the painful death of her dog. (https://bit.ly/3cniFlm)

Babies are physical anomalies. Babies, particularly newborns, are surprisingly different from the children they'll grow up to be. When they're born, their heads account for a quarter of their full body weight, and the size of their brains will double in the first year of life. Babies have 300 bones and around 10,000 tastebuds all over their mouth. Some of the bones will fuse as they age (into 206, as an adult), but the tastebuds not on the tongue will eventually vanish.

A 9-year-old Utah girl and her little sister stole their parents car Wednesday morning with the goal of making it to California before crashing into a semi-truck ten miles away. The youngsters, who were not injured in the freeway smashup in West Valley City, told responding officers they took the car because they wanted to “swim in the ocean.” With the 9-year-old driving and her 4-year-old sibling in the passenger seat, the duo traveled on a highway and freeway before hopping a median and slamming head-on into the truck. Police said the car was badly damaged and the semi had to be towed. The sisters were wearing seatbelts, which police believe spared them any injuries. (https://bit.ly/3pppiJm)

A man is facing multiple charges after a gun was found within his carry-on at the security checkpoint at Pittsburgh International Airport on Sunday. According to the Transportation Security Administration, TSA officers observed a loaded .45 handgun within a passenger’s carry-on bag at the main security checkpoint around 10:59 am. TSA officers alerted Allegheny County Police of their finding. County police were able to determine that 50-year-old Michael DiCicco did not possess a valid concealed carry permit and inadvertently left the firearm in his bag. It was determined that DiCicco should not possess a firearm due to being convicted of a first-degree felony burglary in 1989. DiCicco is being charged with multiple weapons violations and the firearm is in police possession. The Federal Bureau of Investigation was notified. Passengers who bring firearms into an airport checkpoint can face federal civil fines from the Transportation Security Administration up to $10,000. Repeat offenders can be fined up to $13,910. (https://bit.ly/3uXGEOE)