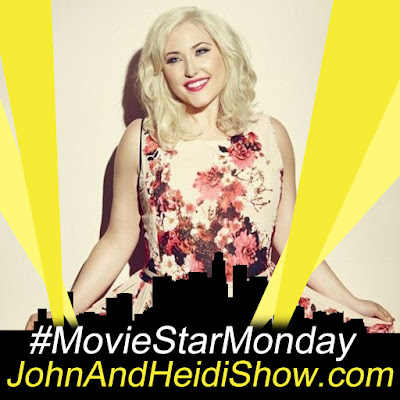 This #MovieStarMonday we visit with Hayley Hasselhoff (Sharknado 4 & more) Her latest project is REDEFINE YOU: A CONVERSATION FOR WELLBEING. Each week Hayley focuses on the importance of self-acceptance. REDEFINE YOU is a place to feel you are never alone in your journey to become grounded in being unapologetically yourself. It is a community in which you can start to identify with stories that relate to you. The podcast features special guests from the entertainment industry, highlighting their journey to self and their personal wellbeing challenges in which they have had to walk alongside. It also addresses wellbeing practices and stigmas with wellness experts and practitioners to help you find what is right for YOU. https://podcasts.apple.com/us/podcast/redefine-you-a-conversation-for-wellbeing/id1568564521

A recent study finds that consuming caffeine even six hours before bed could ruin your sleep. The lead author of the study says decreasing caffeine intake starting six hours prior to bedtime may help reduce the impact on a person’s sleep-wake cycle. (https://bit.ly/3d96n0e)

A new study finds that the vast majority of people would donate a part of their liver to a family member in need. (https://vz.to/3gOjXs5)

A Green Bay woman allegedly made a bomb threat to Vandervest Harley Davidson after her ex-fiancé continued with hosting the party scheduled for their wedding day. According to the criminal complaint, On June 18th around 6:45 p.m. authorities responded to Vandervest Harley Davidson for a ‘suspicious situation’. The owner of Vandervest Harley Davidson said that 32-year-old Amy Rizo allegedly made a Facebook post about going “to bomb and shoot up the building.” Authorities spoke with Rizo’s ex-fiancé and he said they got into an argument and she called off the wedding. The ex-fiancé did not want to lose the money for the food, DJ, drinks and venue so he made the decision to have the party anyway. While at the party someone discovered a Facebook post by Rizo saying “I’m glad you all are having a great time at Vandervest because there is a bomb under it”. Rizo now faces the following two charges: Bomb Scare (up to three and a half years in prison) and Terrorist Threats – Evacuate Building (up to three and a half years in prison). (https://bit.ly/35Jy6R1)

Steven Spielberg's Amblin Entertainment has signed a multi-movie deal with Netflix. Despite the deal, Steven Spielberg is committed to the theatrical experience. (https://bit.ly/2SgJlxg)

Alex Rodriguez has moved into a Hamptons mansion just a mile from Jennifer Lopez’s home — and immediately sparked new romance rumors by being spotted with an attractive brunette. (https://pge.sx/3xR75HJ)

The US Navy performed a bomb test in the Atlantic Ocean that registered as a 3.9 magnitude Earthquake in Florida. (https://bit.ly/3qjfPnc)

Pigs are constitutionally protected in Florida. First written in 1838, the Constitution of the state of Florida guarantees the right to privacy, the freedom of speech, and the right of pregnant pigs to be free from cages. Unlike many crazy or outdated laws, this amendment is recent (passed in 2002) and comes from a well-meaning place: the prevention of cruelty to animals. During pregnancy, a pig must not be caged or even tethered such that it can't turn around freely.

Italian TV presenter Paola Ferrari went viral after many thought she’d accidentally flashed the whole of Italy. The face of Italian Euro 2020 coverage has been compared to Sharon Stone in “Basic Instinct” after an X-rated leg-crossing incident — but she denies that she wasn’t wearing underwear, unlike Stone in the blockbuster movie. (https://bit.ly/3gJE2zQ)

A Texas man wanted on several charges tried to elude deputies by hiding in a chicken coop before leading authorities on a chase. 23-year-old Ivan E. Kuritof was originally being sought on active warrants for assault, unauthorized use of a motor vehicle and burglary. After he was detained, charges of evading arrest were added. Records show that bail was set at $5,000. Bexar County sheriff’s deputies located Kuritof in the western part of the county at about 10:30 a.m. When deputies attempted to detain Kuritof, he allegedly fled the scene before hiding underneath a nearby home. With the help of a K-9, deputies were able to apprehend Kuritof. According to online records, he will be arraigned in court on July 20th. (https://bit.ly/35I5A2c)

A Blossvale man accused of stealing a U-Haul van and spray-painting it to disguise its identity has been arrested by New York State Police. 25-year-old Austin O. Weismore drove the U-Haul from Florida to New York in March, but police say he never returned it to the company. The U-Haul location in Florida reported the vehicle stolen. Then on Wednesday, police found the van at a property in the town of Vienna during a burglary investigation. Part of the van was black from the spray paint, but the U-Haul logo was still visible on the front windshield. Police say the spray paint caused more than $10,000 in damage. Weismore is also accused of removing the catalytic convertor, which is worth more than $1,000. Weismore is charged with criminal possession of stolen property, criminal mischief, and grand larceny, all felonies. He was taken to the Oneida County jail where he is awaiting arraignment. (https://bit.ly/3gHtzoz)

'Nothing Like How Movies Depict It': Man Rescues Pair From Crashed, Burning Car
https://www.sunnyskyz.com/good-news