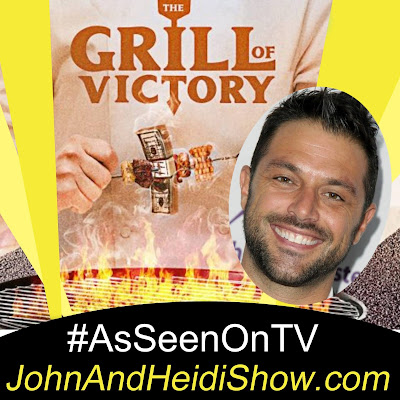 This weekend we visit with Sabin Lomac, the host of the new Food Networks show Grill Of Victory https://www.foodnetwork.com/shows/grill-of-victory

A new study shows that listening to music can be disruptive to sleep. (https://bit.ly/3wQadn0)

A new study finds that spending time at children's birthday parties may have contributed to the spread of American adults contracting COVID-19. (https://bit.ly/35UNcUd)

A Connecticut State Trooper was arrested early Sunday morning after driving under the influence. The man has been identified as Andrew Murphy. Connecticut State Police confirmed to News 8 that Murphy is assigned to Troop A in Southbury and has been a member of the department since July 2019. The incident started around 2:00 a.m. when a Bethel police officer observed a man stumbling in a parking lot. Police say they told Murphy not to drive his vehicle, but he did anyway. Bethel police then attempted to stop him by using police lights and sirens. Once parked at his home, a DUI investigation began. Troopers say it was during that investigation that Murphy attempted to get back into his car after being told not to. Murphy was eventually arrested and transported to the Bethel police department. He’s charged with: DUI, disobeying signal from officer, and interfering with police. He’s currently on administrative leave, pending the outcome of the investigation. (https://bit.ly/3wSr8W6)

Kim Kardashian has told friends she will not change her sexy style when she becomes a lawyer. (https://pge.sx/3gQZ0ff)

Cicadas are getting high on drugs that make them sex-crazed and insane. (https://n.pr/3wRkjEg)

Police have busted a California man who stole 42,000 pounds of pistachio nuts. (https://bit.ly/3j3CBhu)

This past weekend American Airlines canceled more than 300 flights, many because they couldn’t staff crews for the planes. American Airlines stated that they’re still “only about halfway” to bringing back inactive pilots, who must to take a five-day course before they become active. (https://bit.ly/3iYJwZk)

Apple Pie isn't actually American. Apples originally come from Asia. The first pies were baked in Medieval Europe. Even the concept of putting apples in pie traces back to a recipe from England in 1381. Nevertheless, the phrase "as American as apple pie" turned up by 1924 and became a common saying during the years of the Second World War.

Last week in China, citizens participated in the Dragon Boat festival, a Chinese Holiday that begins on the 5th day of the 5th month of the Chinese calendar. (https://bit.ly/3xCpyHJ)

While working her job at Starbucks, the daughter of Miami Gardens’ police chief was allegedly threatened with a gun over an order mix-up — the gunman was given his bagel without cream cheese. Chief Delma Noel-Pratt said that the experience traumatized her 23-year-old daughter. Police say Noel-Pratt’s daughter was working her shift at the Starbucks when the altercation occurred. According to an arrest report, 38-year-old Omar Wright used the drive-thru to order a bagel and pulled ahead after receiving his purchase. As the next customer was being attended to, Wright walked back to the window yelling and screaming about not getting cream cheese on his bagel like he asked. Police say when Noel-Pratt’s daughter tried to help Wright, he told her, “Where is my cream cheese?” She told him to calm down and asked if he had paid for it, which made Wright “very upset.” Police say Wright pulled out a black handgun, held it in the air and told her “I hate b------ like you and you don’t know who your f------ with, I’m from Carol City.” After Wright was given his cream cheese, police say he got in his car and left. The next day, Miami Gardens police stopped Wright and took him into custody. (https://yhoo.it/3iRFrGd)

A New Smyrna Beach man is accused of using a golf club to repeatedly hit a staffer at the New Smyrna Beach Golf and Country Club. David Foster was arrested Tuesday evening for aggravated assault with a deadly weapon. Police said the staffer was closing the club and trying to direct Foster to the proper exit when Foster became angry and pulled a driver from his golf bag. Foster allegedly hit the victim in the head with the club, knocking him to the ground then continued to hit the victim with the club until the club broke. A witness told police he think Foster hit the victim at least 10 times. (https://bit.ly/3gEHlqL)