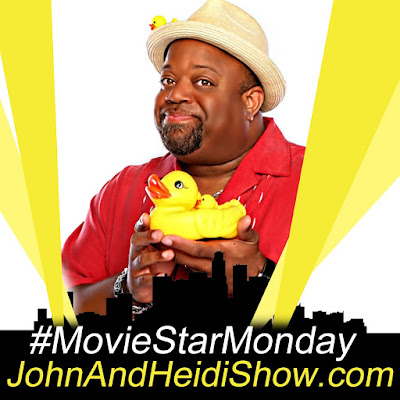 This #MovieStarMonday we visit with actor and comedian Mark Christopher Lawrence (K-PAX, Terminator 2, The Pursuit of Happyness, Chuck)

A new study finds that edgy drivers might actually be genetically predisposed to the behavior known as “road rage.” Scientists are dubbing the innate behavior in some people “accelerousal,” which is described as “stress provoked by acceleration events, even small ones.” (https://bit.ly/2TtKEct)

A new study reveals that Amazon Warehouse workers are injured at higher rates than those at rival companies. (https://cnb.cx/2SMNZmC)


A woman from Utah was arrested on several charges following a high-speed chase, which resulted in police confiscating methamphetamine and snails. According to a brief provided from Ontario Police Chief Steven Romero, 33-year-old Anastasia Dickey of Utah was initially pulled over in Fruitland, Idaho. When police asked her to get out of the vehicle for suspicion of driving under the influence of intoxicants, she fled the scene instead. Police say Dickey left Fruitland and headed west on Interstate 84, reaching speeds of 92 miles per hour. She turned off at exit 374 to Ontario, slowing down in the city, where Ontario Police Department took over the pursuit. Police were able to successfully deploy spikes, but that didn’t stop her. Police said that eventually the vehicle got high-centered on the railroad tracks. Police added that they found “a small amount of meth and in plain view, several snails.” Dickey was lodged in jail on charges of reckless driving, attempt to elude a police officer, unlawful possession of meth over 2 grams, criminal trespass in the first degree and DUI. Currently, there are no criminal charges for the snails, as a state administrative rule governs wildlife violations. (https://bit.ly/3fBcmwL)

A video has gone viral of Courtney Cox and Ed Sheeran recreating an iconic dance scene from Friends. (https://pge.sx/3i6fzWD)

Former Real Housewife of New York Bethenny Frankel was sporting a massive engagement ring on her finger as she strolled the beach in Miami on Saturday. (https://pge.sx/3vz5nd4)

Research shows smartphones are one of the most common distractions for parents and caregivers to overcome while supervising children at playgrounds. When caregivers were observed at playgrounds, phones were involved in about 30 percent of distractions. But phones weren’t the top distraction. That designation goes to talking to other people — with phones just a fraction behind.

Go ahead, give your partner a hug or cuddle while you catch some Netflix. According to research (Binghamton University) it just might build a stronger relationship. The study looked at the effects of non-sexual intimate touch — for example, hugging, holding hands or cuddling on the couch, rather than actions intended to lead to sex. Overall, the study shows an association between non-sexual physical affection and solid marriages.

Someone set a red piranha loose in a Louisiana State University Lake – and wildlife officials are wondering if more of the sharp-toothed fish are lurking under the surface. The fish, a B-horror movie staple, is native to South America and illegal in Louisiana.(https://bit.ly/2S0zV95)

A guy named David shared on reddit that “flat soda is much better than carbonated.” He explained that he took his first sip of warm, flat Pepsi in 2012 at a Christmas party. As bored 12-years-olds are wont to do, he recalls “constantly fiddling around” with his Pepsi bottle the entire night, to the point that the soda lost all carbonation and turned into syrup-y sugar water. He swigged away nonetheless and “enjoyed the taste so much more, and the carbonation didn’t upset my stomach or burn my eyes and throat.” And then the flat-soda lovers on reddit came out of the woodwork. Another guy shared that his grandmother set out a cup of Sprite for 10 minutes, added some ice when it became flat, and handed it to her sick grandson. “It was eye-opening,” he says. “The fizz that made my stomach hurt and my taste buds die was gone. It tasted like a lemon-lime drink, rather than a gut punch.”

Chinese police use geese squads. You've heard of police dogs, but police geese? As of 2013, 12 police stations in a rural area of China have begun to use geese as sentries. They are alert animals and, as you probably know, can create a lot of noise and commotion, which creative Chinese law enforcement officers are taking advantage of. While this trend has yet to spread throughout China, Dongwan police claim that the geese have already stopped at least one theft.

A notorious poacher believed to have killed at least seventy endangered Bengal tigers was nabbed in Bangladesh after a two decade-long manhunt. They don’t mess around in Bangladesh, so don’t be surprised if he gets the death penalty. (https://bit.ly/3c87vky)

A man banging a skateboard on the ground of a Texas shopping mall set off an “active shooter” scare Monday — sending panicked shoppers scrambling for the exits and ducking for cover in bathrooms. Dallas Police said the unidentified person started banging the skateboard at NorthPark Mall at about 1:30 p.m. and made hand gestures as if he was firing into the crowd. Hundreds of shoppers at the mall sprinted for the doors, thinking the bangs were gunshots. A number of people called 9-1-1 to report gunshots as a result of the banging. One employee who spoke to the television station said he hid in a bathroom as the commotion broke out in the shopping center. “I was hiding in the bathroom for ten minutes,” he told the station. Dallas Police Chief Eddie Garcia said he doesn’t blame the shoppers for being on edge given the spate of mass shootings in recent weeks. “Obviously with the country — particularly what it is right now — there’s a lot of trauma. I don’t blame these individuals one bit. This is what’s occurring right now,” Garcia said at a press conference. “We are very fortunate that this was not an active shooter,” he added. (https://bit.ly/3uzWQp2)

Six “low-tech” thieves snagged $740,000 worth of donations out of church mailboxes – then used the dough for cars, clothes, and to wire cash back to their native Romania, Florida police said. Four of the sacrilegious thieves were arrested Wednesday but two of the men are still on the loose, the Florida Department of Law Enforcement announced. “This low-tech yet well-organized effort to steal hundreds of thousands of dollars’ worth of mailed-in charitable donations — at a time when donations may have been most needed — has been stopped,” Department Commissioner Rick Swearingen said in a statement. The men took more than 1,500 checks from 636 churches – 355 in the state alone. The six operated out of Orlando but traveled throughout the state and elsewhere, sometimes hitting as many as 85 churches in a day. Some churches were hit multiple times as well. Now in custody are Ionut Raducan, 33, Marius Dumitru, 28, Marius Dumitru, 34, and Panait Dumitru, 32. Catalin Trandafir, 45, and Simona Trandafir, 39, remain at large. (https://bit.ly/3hSkhqW)