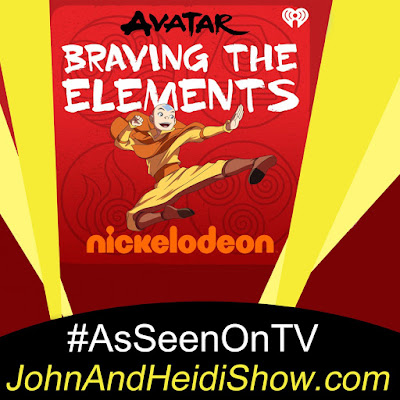 Today we visit with JANET VARNEY (voice of Korra) and DANTE BASCO ( voice of Prince Zuko) of Nickelodeon's AVATAR: THE LAST AIRBENDER. They're teaming up again for a new project as they host AVATAR: BRAVING THE ELEMENTS.

It doesn’t necessarily have to be 5PM to crack open a beer, according to some Americans. Data from a survey (by YouGov) shows roughly one in six (16%) adults consider noon the earliest acceptable time of day to have an alcoholic drink on non-working days. One in 10 (10%) say 5PM. Roughly one in eight (13%) say 6PM or later is the earliest acceptable time, while nine percent of Americans say it’s fine to grab a libation before 10AM. Men (13%) are more likely than women (7%) to say 10AM or earlier is appropriate to raise a glass. Young Americans age 25-30 (17%) are also fine with morning drinks before 10AM.

A study (Harvard University) found that, when domestic differences arise, it’s usually the spouse who does the most talking who gets his or her way.

Curious about where the average street dealer safely stores their stash? Wonder no more! A Florida Man whose rap sheet includes more than a dozen drug convictions was arrested last month after jailers discovered four “crystal rocks” of methamphetamine stored inside the defendant’s “penis skin.” 30-year-old Shaft Bang Adams was collared in mid-May for driving with a suspended or revoked license and booked into the Orange County jail on the misdemeanor count. Adams, an Orlando resident, was familiar with the lockup owing to his 20-plus prior convictions for offenses like domestic assault; battery; possession of a controlled substance; delivery of cocaine; possession of a firearm by a convicted felon; false imprisonment; and possession of drug paraphernalia. During the jail intake process, Adams was subjected to a strip search during which a correctional officer reported finding “4 crystal rocks white in color inside the ‘penis skin’ of Mr. Adams.” A subsequent field test of the rocks “tested positive for Methamphetamine.” Adams was charged with possession of meth and introducing contraband into a penal institution, both felonies. He spent eight days in custody before posting $2000 bond. Adams is back behind bars following his arrest yesterday on cocaine possession and resisting charges.(https://bit.ly/2U4ezsg)

It's bad news and worse news for Indiana Jones Fans. The bad news is the filming of “Indiana Jones 5” has been delayed due to an on-set injury. (https://cnet.co/2SmThW4)

Conan O'Brien smoked marijuana on TV when Seth Rogan was a guest on his show. (https://bit.ly/3jb1sA0)

Britney Spears says her conservatorship has stopped her from getting married and getting pregnant.(https://bit.ly/3daUyH1)

The Backstreet Boys have teamed up with NSync to make a boyband super-group called “Back-Sync.”(https://bit.ly/3j78BBd)

McDonald’s is giving out vaccinations in its California stores. (https://bit.ly/2TUkvUs)

A new space tourism company is selling hot air balloon rides to the edge of the atmosphere. (https://bit.ly/3qpTJja)

A rave in Kentucky ended with 48 people charged with crimes, one throat slashing, and an impalement. (https://bit.ly/2TVeUxc)

A new survey reveals Americans trust their media the least of any country's citizens. (https://bit.ly/3zSXEcv)

Mr. Cherry breaks all the records you've never heard of. Japan's record breaker for most records broken is Cherry Yoshitake, a children's entertainer who goes by "Mr. Cherry." In 2018 alone, Mr. Cherry set one-minute records for the most pairs of underwear pulled on (36), the most baked beans eaten (71), and the most apples bobbed (37).

Prince Harry and Meghan Markle rejected the title of Earl of Dumbarton for their firstborn, Archie — because they feared he’d be teased with “dumb” jokes. (https://pge.sx/3dsNi9N)

A Punta Gorda woman is facing a charge of arson after being accused of setting a laundry basket full of her own clothes on fire in December 2020. 30-year-old Elizabeth LaFleur was arrested Sunday following an investigation into a fire that was set at a home in Punta Gorda. According to court documents, fire crews responded to reports of a house fire on December 20, 2020, and found the fire had started in a white plastic laundry basket full of clothing. A neighbor told fire crews LaFleur came to her home and admitted to setting her mother’s house on fire. Neighbors told responders they rushed to douse the flames with water and dragged the smoldering clothes basket outside. Investigators said the clothes had been doused in lighter fluid and lit on fire. The 30-year-old reportedly grabbed the mother’s pet bird and ran into the woods when fire crews arrived. The basket of clothes was extinguished and a nearby gas can and lighter fluid container were removed from the home by a neighbor. LaFleur is facing a charge of arson to a dwelling. (https://bit.ly/3zWMFin)

An e-scooter rider was filmed trying to join a busy motorway in Bradford. The man can be seen travelling at around 15-mph while contending for a space on the busy carriageway on the M606. Traffic cops captured the incredible moment and then posted the clip on social media. Luckily the officers, from West Yorkshire Police’s Roads Policing Unit, were able to apprehend the man before he joined the busy lane. They seized his scooter and filed a report about the rider, while reminding that privately-owned e-scooters cannot legally be used on a public road or pavement. Posting on Twitter, the traffic cops said: “Officers on patrol were shocked to see this E-Scooter on the chevrons trying to join a live motorway lane with 70-mph traffic. Scooter seized and rider reported.” It is illegal to ride e-scooters on pavements, roads, cycle lanes or footpaths in the UK and those caught face a £300 fine and points on their driver’s license.(https://bit.ly/3zJh3MU)