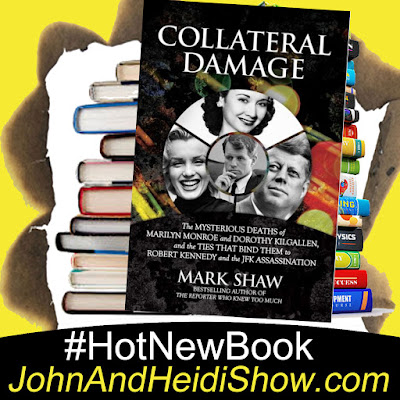 Mark Shaw - Collateral Damage: The Mysterious Deaths of Marilyn Monroe, JFK and Dorothy Kilgallen & the Ties That Bind Them to Robert Kennedy

Researchers from Edith Cowan University say eating at least two daily servings of fruit each day can cut the risk of developing type 2 diabetes by 36%. (https://bit.ly/3uTfGru)

A new poll shows nearly half of Americans believe dinosaurs still exist in some place on earth. (https://bit.ly/34LlrwK)

A drunk man who couldn’t resist picking up an ornamental flamingo from someone’s garden and taking it home with him has seen the error of his ways. In a heartwarming tale of rehabilitation, the embarrassed bird-burglar knocked on the victim’s door for a mea culpa. He handed back the flamingo, saying he couldn’t actually remember taking it but was very sorry. The incident was captured on CCTV showing the man pinch the pink bird from decking in the front garden, while smoking a cigarette, in Dunfermline, Scotland. Video went viral in the local area, with over 60,000 people watching the daylight “theft.” One of the culprit’s relatives showed it to him, along with the hundreds of social media comments about it. He then decided to fess up and face the consequences. “There was a knock at the door and a very embarrassed man holding the missing flamingo,” said Coreen Wrightman, who had probably been wondering if her garden gnomes would be next. ‘He was very apologetic saying that he couldn’t remember stealing the bird as he was drunk and he was really sorry,’ she said. The stolen bird is now back with its mate in the garden. (https://bit.ly/2RdqSRK)

Mariah Carey revealed on Instagram that she once made a “sad attempt” at looking like Rachel from “Friends.” (https://gma.abc/3p9i4cd)

David Schwimmer has revealed that he had a “major crush” on Jennifer Aniston while filming the first season of “Friends.” Jennifer Aniston also said that she shared similar feelings for Schwimmer. (https://bit.ly/3friK9D)

It's been announced that Kelly Clarkson will take over for Ellen after her show goes off the air. (https://bit.ly/3fQepf9)

Government Insiders say the Pentagon’s UFO report may be cover for a hypersonic weapon Cold War between the U.S. and China. https://bit.ly/3imcmSQ

Police in Washington State posted video of officers chasing down a cougar. (https://bit.ly/3uDFesb)

Major Airlines are suspending alcohol service after a rise in fights aboard commercial flights. (https://cnb.cx/3wLGdIt)

West Virginians who get the COVID-19 vaccine will be entered into a drawing to win prizes including custom firearms and $1 million dollars. https://bit.ly/2SRB5ny

There's a country where twins are most likely to be born. Benin, a country in central Africa, is notable for having the highest birth rate of twins in the world. While the world average is just 13 twins per 1,000 births, Benin more than doubles that rate, at nearly 30 twins per 1,000 births. There's no single factor that causes this, but genetics, diet, and even the mother's height are thought to play a role.

A terrifying video that captured the moment a raging hippopotamus chased tourists on the Zambezi River in Zambia has gone viral. (https://bit.ly/3fG6FgX)

Dodgers fans came ready to fight in Houston this week. A wild brawl broke out at Minute Maid Park on Wednesday when a Dodgers couple took on a male Astros duo right in their seats. In viral videos taken by onlookers, a Dodgers fan, with his jersey open and bare chest out, threw consecutive punches to the head of an Astros fan. Then, the man’s presumed partner jumped in and started throwing jabs herself. This week’s slate of games marked the first time fans were in attendance for a Dodgers-Astros game since the 2017 World Series — a series tainted by Houston’s electronic sign-stealing scheme. Dodgers supporters wouldn’t let Astros fans forget the team’s infamous cheating scandal, which helped Houston win the series in seven games. Earlier this week, Dodgers fans invaded Houston, yelling “cheaters” in the streets. The same chants continued on Tuesday when L.A. defeated the Astros 9-2, and carried on throughout the week. Other viral videos showed Dodgers fans holding up garbage cans and signs and starting “trash” chants. Sections of L.A. fans rocking Dodgers blue and white entered screaming matches with the sea of Astros fans on their home territory. (https://bit.ly/3uxZBY4)

An unhinged traveler had a meltdown on an Italy-bound flight over the airline’s face mask policy — pulling the hair of a fellow flier and spitting on passengers, disturbing video shows. The woman — believed to be Italian — was caught on video by fellow passengers on a Ryanair flight from Ibiza to Milan. She is seen wearing a mask, but it is uselessly covering her chin as she apparently refused to follow the airline’s protocol of properly masking up. “The crew of this flight from Ibiza to Milan Bergamo requested police assistance upon arrival after a passenger became disruptive in-flight,” Ryanair told the mag about the Wednesday incident. “The aircraft landed normally, and police removed the individual at Milan Bergamo airport. This is now a matter for local police,” it added. In response to the viral footage, the woman blew off steam on Instagram, where she whined that she was “frustrated” and “unlucky” during the flight. She also threatened legal consequences for anyone who shared the videos with other people. (https://bit.ly/2S5wuhh)