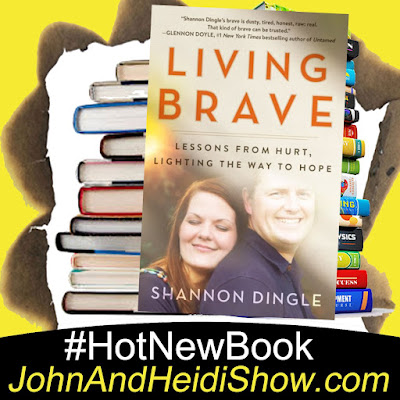 Today we visit with author Shannon Dingle. She has experienced staggering tragedy and trauma in her life, including surviving sexual abuse and trafficking as a child that left her with lasting disabilities and experiencing faith shifts that put her at odds with the evangelical church that had been her home. Then, during a family vacation in July 2019, Shannon’s husband was tragically killed by a rogue wave. The grief of the aftermath of losing her love and life partner sits at the heart of her new book LIVING BRAVE: Lessons from Hurt, Lighting the Way to Hope - https://amzn.to/3BxAysH

A study finds that we are more mentally alert in rooms painted bright colors such as reds and yellows.

While in custody and declining to take field sobriety tests, an Iowa motorcyclist suspected of drugged driving Googled “how long meth stays in your system after initial consumption.” Robert Perez, 53, was riding a stolen Kawasaki motorcycle when pulled over in Iowa City. Perez was “making non-sensical actions” while driving the motorcycle, which was listed as stolen in a law enforcement database. When questioned by an Iowa City Police Department officer, Perez claimed “a fellow meth user loaned him the vehicle.” Perez, however, was unable to provide a name or address for the motorcycle’s purported owner. Perez, who admitted injecting meth five hours earlier, had “multiple syringe caps” in his pockets. Though he agreed to take a breath test (which detected a .00 blood alcohol content), Perez refused all field sobriety tests. While at the police station--and apparently still in possession of his phone--Perez was “witnessed by another officer Googling ‘how long meth stays in your system after initial consumption.” Investigators then secured a search warrant to draw blood from Perez. The sample has been sent to the state crime lab for testing. Perez--who has two prior operating while intoxicated convictions--was charged with theft, driving under the influence, and driving with a suspended license. (https://bit.ly/3illUMh)

Kanye West sported a ski-mask while attending the BIG 3 Basketball Tournament in Las Vegas on Saturday. People say Kanye was mocking the mask rules in the arena. (https://bit.ly/3z7wCNl)

SCOOP OF THE DAY: Brought to you by PureCanaCompany.com
(promo code radio)

Newark International Airport was forced to delay dozens of flights after massive flooding in the area. (https://bit.ly/2UXboCN)

The NYPD is looking for a pervert who has repeatedly exposed himself to women on the train. (https://bit.ly/3imuhHA)

A Georgia man was arrested for attempting to sell iguanas for $10 each out of the back of his SUV. (https://bit.ly/2U8WCsP)

The majority of Americans choose dogs over love. Dogs have been known for the longest time as man's best friend, but Americans are increasingly taking that to a new level. A 2017 study from Rover.com conducted over three years found that 54 percent of dog owners are willing to end a relationship if their pup doesn't like their partner. The study also found that 94 percent of dog owners consider their dogs to be a part of their family, and 78 percent include their pups in major family moments. Since one in four people said they bring their cuddly companions on first dates, maybe consider bringing dog treats instead of flowers next time.

Kim Jong-Un was reportedly relaxing on his remodeled yacht, complete with twin waterslides and an Olympic-sized pool — as North Koreans grapple with famine and a prolonged COVID-19 lockdown. (https://bit.ly/3kdViQ5)

The owner of a Chinese restaurant in New York City’s Chelsea neighborhood posted a video he said showed two women breaking into his kitchen and trying — but failing — to whip up dumplings. Jason Wang, the owner of Xi’an, posted the video on social media after he said he walked into the restaurant and sensed something was amiss. The Gothamist reported that he noticed a bun floating in the water and cut vegetables outside his refrigerator. Wang reportedly said he was appalled when he watched the surveillance video from the night before. He also admitted that he was a little amused watching one unsuccessfully trying to fry the food. He hinted that he will not press charges if the two reach out to him, pay for the expenses, and apologize. "It’s unacceptable, it’s something that shouldn’t happen for safety and liability reasons, but at the same time, it’s somewhat entertaining," he said. The NYPD told Fox News that there is no report on file regarding the alleged incident. An after-hours call to the restaurant went to voice mail.(https://fxn.ws/3wGVw4y)

A Louisiana man has admitted to stealing and pawning a $4500 ring owned by his girlfriend and then using the ill-gotten proceeds for a down payment on an engagement ring for the same woman. Justin Pope, 29, was arrested yesterday for the theft of a ring that belonged to Samantha Futch, 40. Pope allegedly stole the ring from his girlfriend’s home in Downsville, a village about 25 miles from Monroe. According to a probable cause affidavit, Pope confessed to “taking a ring that belonged to his then-girlfriend in 2019” and told investigators that he sold the ring “at a local pawn shop, then used the money for a down payment on an engagement ring for her.” The stolen ring was valued at $4499. The affidavit does not reveal how Pope was identified as a suspect (or why it took two years for an arrest). Pope told deputies that he tried to retrieve the ring a month after pawning it, “only to learn that it had been melted for scrap.” The court filing lists separate addresses for Pope and Futch, so it appears the pair is no longer a couple. (https://bit.ly/3B4yHv7)

Donations Pour In For Mechanic Who Fixes Old Cars And Gives Them To People In Need https://www.sunnyskyz.com/good-news