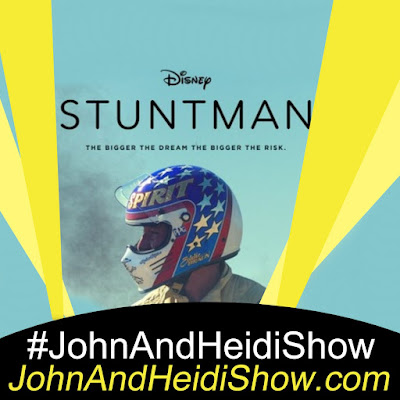 This weekend we visit with Eddie Braun and Kurt Mattila about the new documentary “Stuntman” From Executive Producers Dwayne Johnson and Dany Garcia, which premiered Friday, July 23, on Disney+.
https://www.youtube.com/watch?v=ZpkRgaXNGyo

Eddie Braun began regularly performing stunts on television’s biggest and most popular action series, including shows like “The Dukes of Hazzard,” “The Fall Guy,” “CHiPS” and “The A-Team.” He soon was consistently working in feature films, commercials and music videos for A-list recording artists like Taylor Swift, Justin Bieber and Madonna. His work can be seen in major box office movies like “Argo,” “Transformers,” and “The Avengers,” to name a few.

A new survey of 2,000 Americans finds that 2 in 3 dog owners cook special meals just for their pup. 6 in 10 dog owners admit they care about their pet so much, they consider themselves “helicopter parents.”(https://bit.ly/3zf6mjY)

A recent survey of 2,000 Americans explored the differences between the astrological signs to see what each sign cares about the most when it comes to home décor and furnishings. When it comes to sprucing up their homes, researchers find those who have Aries as their zodiac sign are most confident in their interior design skills. (https://bit.ly/3zi2cba)

One man’s day at the beach turned deadly after he was killed by a shark while wading into the surf to relieve himself. The victim, Marcelo Rocha Santos, 51, had reportedly been drinking with friends when nature called. He and a fellow reveler decided to head into the sea to urinate around 2 p.m., when the surf had turned tumultuous and murky, making it difficult to spot anything in the water. The two men waded into the water up to their waists. That’s when the shark struck — biting off the unfortunate beach-goer’s hand and taking off a chunk of his leg. The lifeguard was unable to stop the attack. However, shortly thereafter, Santo’s buddies managed to drag him back to shore, where he collapsed on the beach unconscious while horrified bystanders looked on. One beach-goer even captured footage of the victim as he lay motionless on the sand. Santos was immediately rushed to a hospital in Recife, where he was pronounced dead. Meanwhile, his buddy da Silva, who was the only other person in the water at the time, escaped the incident unscathed. It’s unknown what kind of shark bit Santos — it is thought to be either a bull or tiger shark. However, the incident took place near an area where there had been 12 prior attacks.(https://bit.ly/3wOeBCg)

Meghan Markle and Prince Harry’s second Netflix project will focus on a 12-year-old girl’s adventures in an animated series. “Like many girls her age, our heroine ‘Pearl’ is on a journey of self-discovery as she tries to overcome life’s daily challenges,”(https://bit.ly/36zgpUW)

Sources tell the New York Post’s Page Six that Kanye West asked Irina Shayk to go to Paris for a couture show with him, but the gorgeous model and mom turned him down. (https://pge.sx/36zbD9I)

A new report claims Taco Bell is facing a shortage of their taco meat. https://cbsn.ws/3wSBeFx

Ben and Jerry's has announced it will stop selling ice cream in the west bank in protest of Israel.(https://on.wsj.com/3rnSrFM)

A California theme park was temporarily evacuated after a man climbed to the top of a 250-foot ride. (https://bit.ly/3rxTpiQ)

American kids are binge-watching so much of the British cartoon “Peppa Pig’’ that they are developing English accents and even using words like “telly” and “ready, steady, go.” (https://bit.ly/36MmUUk)

A restauranteur is selling a new luxury hamburger for nearly $6,000. (https://bit.ly/3rkDUdL)

An unopened copy of the video game Super Mario 64 has sold at auction for $1.5 Million. (https://nbcnews.to/3wTsmzk)

The first Star Wars was expected to be a flop. The original 1977 Star Wars had a budget of $8 million, which distributor 20th Century Fox was reluctant to give to director/writer George Lucas, so he accepted a lower salary in order to keep the budget. The movie went on to make $775 million around the world, and Disney picked up the entire franchise for $4 billion. For comparison, Star Wars: The Last Jedi, which was released in 2017, had a reported budget of $317 million.

Brisbane, Australia was picked Wednesday to host the 2032 Olympics. The victory led to a fireworks display in Brisbane that was broadcast to IOC members in their five-star hotel in Tokyo. (https://bit.ly/3zhufrl)

A Utah-based gun manufacturer is taking heat for its customized kit that encases a Glock handgun in Lego bricks – putting a weapon that looks like a toy in the hands of owners for just a few hundred bucks. Culper Precision in Provo said in late June it wanted the Second Amendment to “simply be too painful to tread on.” “Here’s one of those childhood dreams coming to life, the Block19 prototype, yes you can actually build Legos onto it,” the company announced on its Instagram page. “We superglued it all together and surprisingly it survived a little over 1,500 rounds in full auto at Shootah this past weekend.” The colorful customization option started at $549 and went up to $765 depending on the design, according to the Firearm Blog. “The idea is that customers who have a Gen 3 or 4 Glock 19 with a black polymer frame and have already purchased an aftermarket blank slide … can send that in and we will return a Block19 to them for around $600,” the company’s president, Brandon Scott, told the website. But blowback to the design, both from Lego and the public, was swift, with some commenters calling the modification the “most irresponsible” they’ve seen in some time. The kit was no longer available on the company’s website Wednesday after Lego sent Culper Precision a cease-and-desist letter regarding the custom design. (https://bit.ly/3wEPuSb)

A 74-year-old man shut down the Fort Lauderdale Airport on Saturday when he told an Air Canada Agent he had a bomb in his bag after learning that he would have to pay for his carry-on item. Wegal Rosen was arrested and released on a $20,000 bond in order to see his cardiologist in Toronto but faces up to 15 years in prison. The bomb threat set off an hours-long shut down of Fort Lauderdale Airport Saturday morning. Three terminals were closed, with many flights canceled or delayed. Police reports state that at 8.30 a.m. Rosen, of Ontario, walked away from the ticket counter where he had been arguing with the Air Canada agent about paying for his carry-on baggage. As he was walking from Terminal 2 to Terminal 3 to purchase a Visa card to make the payment, the agent called out that he left his carry-on bag there and he needed to come and get it. Rosen told the agent there was a bomb in the bag causing deputies to search the airport for hours to check that the area was clear. The bag actually contained Rosen’s CPAP machine. The elderly man was arrested and taken to jail. (https://bit.ly/3B4Jp51)

GOLF COURSE OR REHAB: Brought to you by TimeForRehab.com

I read the name of a REAL business located somewhere in the world...
Heidi has to guess if it's a Golf Course or a Rehab Center.

Parents Reunite With Son 24 Years After He Was Kidnapped
https://www.sunnyskyz.com/good-news