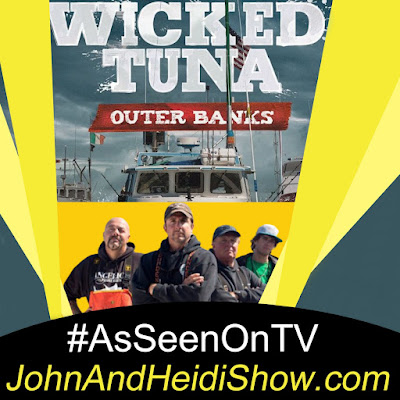 Today we visit with Captain Bobby Earl of the Reel ‘E Bugging. We just had the season premiere of Wicked Tuna: Outer Banks. Sunday nights at 7:30/6:30c on National Geographic Channel.
https://www.nationalgeographic.com/tv/shows/wicked-tuna-outer-banks

Captain Earl’s big, boisterous personality may not stand out in his native New York City, but he has been making plenty of noise in North Carolina. When he’s on the water, everyone knows, because Earl is not shy about trash-talking, bragging or fishing hard. His former career on Wall Street was the perfect training ground for the high-stress stakes of commercial fishing for a living.

He made national news with a devastating boat fire https://www.nationalfisherman.com/national-international/-wicked-tuna-crew-survives-boat-fire

According to a survey, the average adult over the age of 30 has kept at least three things from their childhood (pre-teen) years, like blankets, stuffed animals, etc.

A UK study found that too much air pollution could cause blindness. (https://bit.ly/2UoSPHN)

A study by the University of Southern Australia found that movies like "Jaws" are hindering efforts to save the endangered great white sharks. The study found that 96% of movies portray sharks in a negative capacity. (https://bit.ly/3xPXd1c)

Officers with U.S. Customs and Border Protection say they discovered several hundred grams of methamphetamine hidden inside peanuts at an express consignment hub in Memphis. On June 29th, officers X-rayed a shipment that was being sent from Mexico to Texas when they discovered some “suspicious anomalies,” the agency said. The manifest listed the shipment as “REGIONAL BREAD ROASTED PEANUTS REGIONAL DUST SWEET MADE OF CORN.” Authorities said when they broke open the peanut shells, they discovered a white crystalline substance inside. That substance later tested positive for methamphetamine. Authorities said attempts to smuggle drugs in shipments is common.“My experienced officers long ago lost all surprise at the smuggling methods they encounter every shift,” said Area Port Director Michael Neipert in a news release. “Narcotics in fruit, nuts, baked goods, shoes, toys, and all kinds of other items disguised as gifts or other legitimate shipments fly through the express consignment world.” In all, authorities said they seized 489 grams, which is the equivalent of 2,445 doses. (https://bit.ly/36xFqzL)

Lebron James tweeted the caption, "Hi Haters," along with a link to the first place Box Office for “Space Jam” in its debut weekend. This “Space Jam” is totally different than the one in the 90's. (https://bit.ly/3Bfor3o)

Bill Gates’ ex-wife Melinda was spotted traveling in New York City with six bodyguards and three SUV’s. According to the fine people at the New York Post, a detail the size of Gates’ is usually reserved only for people in the top levels of government, or former presidents. (https://pge.sx/3eaKZsg)

Adele sat courtside at Game 5 of the NBA Finals with power agent, Rich Paul, amidst rumors the two are dating. Who knows? (https://bit.ly/3xO1ylj)

Kraft is teaming up with a Brooklyn ice cream maker to make Kraft Macaroni and Cheese flavored ice cream. (https://on.today.com/3raNwaZ)

An Italian Land Artist has created a 215,000 square-foot image of the Euro cup on a crop-field as a tribute to Italy's win. (https://bit.ly/3eolRhx)

A video has gone viral of a Louisiana man who got bored sitting in traffic and jumped off a bridge. The jumper survived but he was fined for criminal mischief. (https://bit.ly/2UVLors)

A new book claims human marriages to robots could be considered normal by the end of the century. (https://bit.ly/2U0QJxL)

Humans aren't the only species to adopt. We've seen the heartwarming videos of dogs nursing baby squirrels back to health—and that's actually much more common than we think. It becomes mutually beneficial to have more furry friends in the group to take on other roles in survival—whether that be hunting, gathering, or just simply cute companionship. Though the phenomenon isn't completely understood, it's clear that both humans and animals have an instinct to care for others.

The Capital of South Korea has banned fast workout music in gyms to prevent people from working out too hard during the COVID-19 pandemic. (https://cnn.it/3eeBhF9)

A parachutist from Camp Roberts torpedoed through the roof of a Southern California home and into the interior of the house. The man, who was reportedly a British soldier in the midst of a training exercise, dealt with a chute that didn’t fully open before he plunged through the house in Atascadero on July 6th just before 5 p.m. “The parachutist was conscious but stunned with complaints of pain but no visible serious injuries,” the Atascadero Police Department said in a recent news release. “The occupants of the residence were not home at the time and therefore were uninjured.” The homeowner’s mother told KSBY that there wasn’t much damage in the house after he came through the roof when he landed inside – apparently into the kitchen. “It’s amazing,” Linda Sallady said. “It’s mostly the ceiling, the sheetrock. He missed the counters, appliances, everything.” Neighbor Rose Martin called his survival a miracle. “I mean, who lands like that without a parachute and lives?” Martin told the station. Atascadero police said that everyone else in the jump landed at a designated spot. (https://bit.ly/3ka76CI)

A woman accused of destroying people’s property, then putting up a fight with police is now behind bars. APD says Loyola Volpert was wearing a hospital gown Saturday while in a neighborhood near San Pedro and Copper. She reportedly removed the gown, tried breaking into locked vehicles, then started destroying items in people’s front yards. The criminal complaint states that when police got to the scene, she tried running and started throwing items at officers. Police caught up with her and put her in handcuffs. That’s when she allegedly kicked an officer. Volpert was booked and charged with battery upon a peace officer. (https://bit.ly/3r3aaSF)

This California Creek Bed Was A Wildfire Risk, Then The Beavers Went To Work
https://www.sunnyskyz.com/good-news