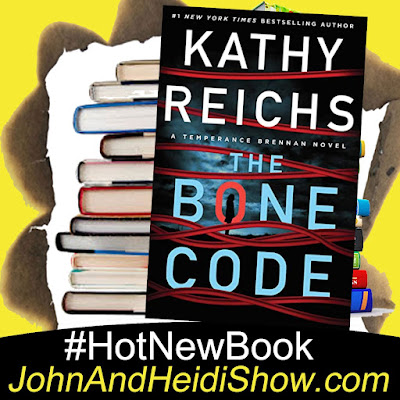 We will also talk a bit about BONES TV

A study by Northwestern University found that the more money you make, the longer you'll live. (https://bit.ly/3rvO3oc)

A study conducted by researchers at the University of Michigan finds moving the clocks ahead each spring negatively impacts “night owls” more than others. These same researchers believe it’s time to leave the clocks where they are all year long and abolish Daylight Saving Time. (https://bit.ly/3x16Etb)

A man showing off his new gun to patrons in a Florida bar ended up shooting himself with the weapon instead. The unidentified knucklehead was inside O’Riley’s Uptown Tavern in Pensacola at 11:00 p.m. Thursday when he pulled out the gun to show it to a man and a woman at the bar. The man then made a quick motion to put the gun into an imaginary holster under his shoulder when the gun went off and a bullet struck his torso. “I don’t know if he was pretending to be a badass or something,” bar manager Warren Sonnen told the News Journal. “But from what I can tell it was completely by accident.” Cops on routine patrol were flagged down outside the bar after the shooting. However, the wounded man left the bar and checked himself into a local hospital before cops got to the scene. Police said they were still trying to determine if charges would be filed. The man’s condition was not immediately known. (https://bit.ly/3eTjLGU)

After being tracked down by TMZ Paparazzi, Chrissy Teigen was asked about her cyberbullying scandal and said she could be cancelled “forever.” She told the camera operators that she’s avoiding trouble by minding her own business and, quote, “I have decided I’m not getting involved in anyone’s s–t ever again.” (https://pge.sx/3kKuIOD)

Britney Spears has announced that she's won the right to drive again. (https://bit.ly/3BngNEh)

Lebron James is being ridiculed for his terrible performance in Space jam. (https://bit.ly/2TuTnf0)

Wally Funk is complaining about her trip on Jeff Bezos' rocket, saying that the cabin was too small for her to roll around and experience the full extent of zero gravity. (https://bit.ly/3kLoKNq)

The top floor of the controversial Manhattan supertall known as “432 Park Avenue” hit the market Monday asking $169 million, earning the rank of Manhattan’s most expensive listing. The six-bedroom, seven-bathroom, two-powder-room penthouse sits on the 96th floor of a “toothpick-like” building that has garnered a reputation for creaking, floods, and supposed design flaws. (https://bit.ly/3kF04Gs)

A 70-year-old woman once completed seven marathons in seven days, across all seven continents. Chau Smith was always an avid runner, and, in 2017, she decided that for her 70th birthday, she would complete seven marathons in one week across all of the continents. Traveling made it challenging—for example, Smith made the race in Egypt just minutes before the start because her plane to Cairo was delayed. But despite the obstacles, she completed her goal.

A British man in Cornwall had to be rescued from a hole he dug on the beach after the sand around it collapsed inward. (https://bit.ly/3rrX29R)

This “Juliet” has a mean streak. The former girlfriend of the lovesick British Romeo who made waves around the globe for riding a jet ski across the Irish Sea to be with her has reportedly been slapped with a jail sentence for attacking another woman. 31-year-old mother of two Jessica Radcliffe was sentenced to eight months in the slammer after she and her pal Leanna Louise Bradley assaulted the woman in her home while her kids were upstairs on March 31st. The two women then attacked a police officer while they were being arrested at the scene. Radcliffe admitted to assault causing actual bodily harm, assaulting a police officer and criminal damage. Bradley also was sentenced to eight months in jail after pleading guilty to assault causing actual bodily harm, resisting arrest and two counts of property damage. The sentencing is the latest news to come from the foolhardy saga of 28-year-old Dale McLaughlan, who embarked on a treacherous, 4.5-hour trip from Irvine, Scotland, to the Isle of Man to see Radcliffe in December. The hopeless romantic roofer, who doesn’t know how to swim, ended up being thrown in jail for breaking coronavirus lockdown rules by entering the island without permission. (https://bit.ly/2Ui94Xn)

According to the Charlotte County Sheriff’s Office, a man found a surprise guest in his pool after returning from the doctor’s office. The sheriff’s office said the man noticed clothing scattered across his lanai when he found a naked stranger in his pool, prompting him to call law enforcement. When deputies arrived, the trespasser, Heather A. Kennedy, told them to leave her alone, refusing to put clothes on and get out of the pool. The deputies eventually convinced her to leave the pool and put her clothes back on, but when they tried to detain her, she resisted, pulling away from the deputies. They managed to subdue and book Kennedy into the Charlotte County Jail, identifying her from previous booking photos. She now faces charges for trespass in structure or conveyance and resisting officer without violence. (https://bit.ly/3iACiIP)

A New Start After 60: Woman Fulfills Dream Of Opening Her Own Bookshop
https://www.sunnyskyz.com/good-news