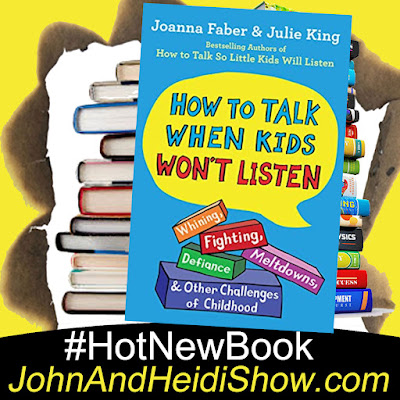 Today we visit with best selling author Julie King about her new book HOW TO TALK WHEN KIDS WON’T LISTEN, by Joanna Faber and Julie King is a new addition to the beloved and bestselling How To Talk series, focused specifically on communication strategies for childhood’s most challenging moments.

Since 1980, millions of parents have relied on Adele Faber and Elaine Mazlish’s timeless How To Talk So Kids Will Listen & Listen So Kids Will Talk—hailed by the Boston Globe as the “parenting Bible”—for practical advice on communicating effectively and empathetically with children. In 2017, Adele’s daughter, Joanna Faber, along with Julie King, continued the family tradition applying the same trusted techniques to the particular challenges of parenting young children in the bestselling How To Talk So LITTLE Kids Will Listen. https://amzn.to/3sM7GJl

Four out of five adults claim to be good spellers. Females are the most confident (87 percent) in their spelling abilities.

According to a new study conducted by the University of Michigan, more Americans believe in Darwin’s theory of evolution than those who do not. Over the last decade or so, the percentage of Americans who believe in evolution has increased to 54%. (https://bit.ly/3kyiVS3)

A Redwood City man who allegedly broke into the Maple Street Correctional Center in Redwood City and was arrested by a correctional officer pleaded not guilty to two misdemeanors in court. Prosecutors said that 35-year-old Moises Dona Robles claimed to be getting away from a man with a gun and did not know he entered into a county jail but admitted to being under the influence of meth and alcohol. A correctional officer saw Robles sitting in the lobby and thought he was an inmate before recognizing him as a trespasser in street clothes and stopping him. Video surveillance showed he climbed an exterior and interior fence, climbed up to a second-floor patio, and went into the jail through the patio door, prosecutors said. His next court appearance is November 30th.(https://bit.ly/3D6BUeO)

33-year-old musician Lizzo revealed that she agrees with Matthew McConaughey when it comes to not wearing deodorant. (https://fxn.ws/3kkpZ4i)

MSNBC’s star anchor Rachel Maddow has reportedly renewed her contract with the cable news network — but the multi-year deal will see her five-day-a-week show transition into a weekly show. (https://bit.ly/3gqKgEm)

In Scotland a man walked into a bank, handed the teller a stickup note and implied he had a gun. The teller pushed the silent alarm button as she gave him some money. The man walked quickly out of the bank. When he got to the street he started to run, but he had only gone a few yards when several police officers stopped and arrested him. How did the cops get there so fast? The police station is across the street from the bank.

Researchers say our brains boot up when we wake up in the morning.

A new report claims a growing number of people are incorporating marijuana into their workouts. (https://bit.ly/3yYbFEG)

A New Jersey doctor is accused of sacrificing animals for witchcraft.(https://bit.ly/3goUOnk)

According to a study at Georgia Tech Research Institute, your password should be at least 12 random characters long — and include letters, numbers, and symbols — if you want to consider yourself safe from pro password hackers.

Every time you shuffle a deck of cards, you get a combination that's never existed. Grab a deck of cards and shuffle. Most likely, you will have created a combination of cards that had never existed yet until that moment. Any math experts out there know that this is because the probability comes out to 52 factorial or 52! (52 x 51 x 50 … x 2 x 1). The probability that two card shuffles are exactly the same is so small, it likely will never happen.

The Queen of England has ordered top aides to fight back with lawsuits over hurtful remarks from Prince Harry and Meghan Markle. (https://bit.ly/3miK5ia)

A Florida man was arrested on Friday for allegedly making threats against Walt Disney World on Twitter, including that he was going to throw grenades into executives’ homes. 31-year-old Steven Jordan of Seminole was taken into custody by Pinellas County law enforcement after a 186-tweet tirade in a three-hour span on August 8th. At least two of the posts were aimed at Walt Disney World. According to police, the now-deleted tweets said: “@Disney or we will blow up all of your execs houses with C4” and “@Disney I will toss a hand grenade threw their loft window.” Police alleged Jordan also made several threats towards Activision and its executives over the gaming company’s sexual harassment lawsuit. Jordan’s account was suspended by Twitter on August 9th. Detectives working with the Florida Department of Law Enforcement determined Jordan was the owner of the raging account. Jordan allegedly admitted to the threatening tweets in an interview. He was charged with threatening to throw, place or discharge a destructive device. Jordan faced a similar charge in 2019 when he was arrested for falsely reporting a bomb. He was being held in the Pinellas County Jail on a $10,000 bond. Police said the investigation is ongoing. (https://bit.ly/3xP5l1d)

An MTA motorman let his girlfriend operate a D train through multiple stations in Brooklyn on Friday — and their next stop could be jail. Cops are looking to question the wannabe-conductor, Dominique Belgrave, 28, after she posted an Instagram Story showing her and her beau — identified by police as Terrell Harris — holding hands over the train’s controls on their romantic jaunt through the 50th Street, 55th Street and 62nd Street stations. “Yes, this is me operating the train right now,” Belgrave says in one of multiple videos posted to her account, which has since been made private. At one point, as the love train choo-choos through underground stations, Belgrave is shown in footage alone at the controls and posing for a selfie with Harris in the cab. Belgrave’s caption reads: “Conducting The D u hurdddd.” Footage of the transit-loving temptress driving the motorman wild went viral among MTA workers over the weekend, and eventually caught the eye of a supervisor — who reported them to the NYPD. Interim Transit President Craig Cipriano said Harris will be disciplined. The 32-year-old, 11th-year MTA employee earned $117,486 in 2020, according to SeeThroughNY. “I want to assure customers that the operator involved has been removed from service and will no longer be allowed to control a train,” said Cipriano. (https://bit.ly/3xMh40d)

'They Were My Guardian Angels': Bride Hitchhikes To Her Own Wedding
https://www.sunnyskyz.com/good-news/