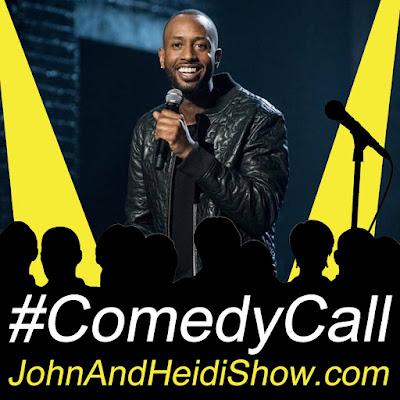 It's a comedy clip show with a bite (think cute fluffy dogs who go on the attack, sweet old ladies that curse like a sailor, you get the idea) featuring panelists including Alyson Hannigan (How I Met Your Mother); Ross Mathews (RuPaul’s Drag Race) and Dulce Sloan (The Daily Show with Trevor Noah).

James Davis is the creator, executive producer and star of Comedy Central’s Hood Adjacent with James Davis, which premiered in 2017 to rave reviews. He was also a writer for The Late Late Show with James Corden on CBS and a recurring character on Kevin Hart’s hit show, Real Husbands of Hollywood. James can also be seen on Kevin Hart Presents: The Next Level on Comedy Central. (Here’s a clip from a recent Comedy Central special).
https://www.youtube.com/watch?v=09puq873ZAU

Border Patrol agents busted a woman in California with $414,000 in cash stashed in a Toyota Prius. The 46-year-old US citizen, who was not publicly identified, was stopped while driving on Interstate 5 — which runs from Mexico’s border to the Canadian line — near Oceanside on July 13th. Agents requested permission to search the woman’s 2012 Toyota Prius and uncovered 37 bundles of cash wrapped in cellophane concealed inside the car’s doors. The woman was taken into custody for suspicion of bulk currency smuggling. Both the cash and the Prius were seized and the woman is being prosecuted for currency smuggling. “The US Border Patrol works tirelessly to protect the homeland from transnational criminal organizations — the same criminal enterprises that poison our communities with narcotics and smuggle human beings like cargo,” San Diego Sector Border Patrol Chief Patrol Agent Aaron Heitke said.(https://bit.ly/3ivgBdm)

Peruvian Skateboarder Angelo Cara Narvaez smashed his groin into a wall during Saturday's Preliminary Round. (https://bit.ly/3BItuK2)

Cuba Gooding Jr. is being mocked for his terrible Karaoke performances in the Hamptons over the weekend. (https://pge.sx/3y4ggFb)

Sylvester Stallone's three daughters turned heads on the Red Carpet at the premiere of "Midnight In The Switchgrass." (https://pge.sx/3eQBPBm)

Adele and her new boyfriend Rich Paul were at a surprise 80th birthday bash for Patriots owner Robert Kraft in the Hamptons on Saturday night. (https://pge.sx/3l1EtYT)

Lance Bass criticized Justin Timberlake on TikTok for taking too long to reply to his texts. (https://et.tv/3rBmM3I)

An Australian athlete has been sent home from the Olympic Village after testing positive for cocaine. (https://reut.rs/3x1uRQ9)

A federal appeals court temporarily put on hold a lower court’s ruling that would have ended restrictions on cruise ships in Florida from the Centers for Disease Control and Prevention. The CDC had said if a ship’s crew was 98% vaccinated and passengers were 95% vaccinated, they’ give cruises the green-light. (https://bit.ly/36HySPc)

The man who founded Atari also started Chuck E. Cheese. In 1972, Nolan Bushnell started the gaming company Atari, which gave us the classic arcade game Pong. Bushnell sold the company just four years later and the following year, he opened Chuck E. Cheese! In fact, there is one game in Chuck E. Cheese that actually is called Ping, a knockoff of his original arcade game, which he couldn't use since he no longer owned it.

A black bear has been spotted roaming around the Olympic games in Tokyo. (https://bit.ly/3i11Obf)

Two Fresno-area suspects were arrested after three people were shot and stabbed at a Sutter County pigeon racing event. In a news release, the Sutter County Sheriff's Office said that three people were hurt July 10 while at a pigeon race. Deputies received reports at 2:53 p.m. of gunshot victims who were leaving the area on their own and headed to the hospital, but eventually had to stop and call 9-1-1 for assistance. Four vehicles had pulled up to the event and several people got out armed with pistols and swords, which they used to attack the victims. One person was shot in the foot, another was shot in the thigh and a third was stabbed in the neck and shot several times. The first two were taken to UC Davis Medical Center and have since been released, while the latter was taken to Rideout Memorial Hospital. The victims are all between 34 and 39 years old. Sheriff's deputies believe that the attack stemmed from a dispute that happened a few weeks prior at a previous pigeon racing event. The Sheriff's Office said that more suspects have been identified and more arrests will be forthcoming. (https://bit.ly/3kH9st5)

A Texas man has been arrested after he highjacked an ambulance in Houston while a patient was inside. Authorities said the ambulance was transporting a patient when a car stopped ahead of the ambulance and the driver got out to point a gun at the ambulance driver. The ambulance was recovered on the highway and the suspect has been taken into custody without incident. According to Click2houston, the gunman forced the driver out of the ambulance and took off in the vehicle while another firefighter and patient were in the back. Police Chief Samuel Peña said the female firefighter was able to deescalate the situation despite the gunman pointing the gun at her while she was caring for the patient. The firefighter who was forced out of the ambulance and left on the side of the road called the police. “We immediately were following him. Our operation center and dispatch knew exactly what was going on and we were able to track the ambulance at all times,” Houston Fire Department Deputy Chief Isaac Garcia said. “He did appear to surrender peacefully, from what I’ve been told. He got out and one of the police officers took the ambulance off the freeway to where we see right now.” The patient in the ambulance was taken to the hospital in another vehicle. (https://bit.ly/3wY6S4w)