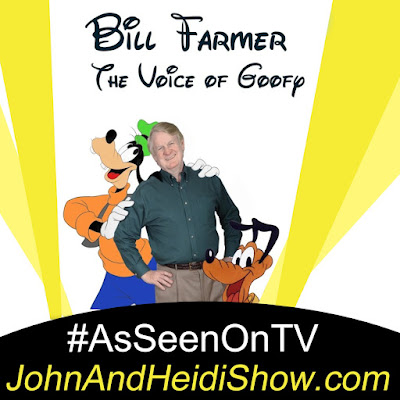 Mickey Mouse and his pals are back in a new series Mickey Mouse Funhouse, and to tell you about it we have Disney legend Bill Farmer, who has been the voice of Goofy and Pluto for nearly 35 years! Bill’s voice has been featured in literally thousands of films & TV shows including Toy Story, Toy Story 2, Monsters Inc., Space Jam and The Lorax to name just a few. He’s also the host of It’s a Dog’s Life with Bill Farmer on Disney+ in which he crosses the countrymeeting dogs doing incredible jobs to improve our lives.

Joining Bill will be Harvey Guillen who voices a brand new character, Funny the Funhouse, an enchanted talking playhouse who takes Mickey and friends to unique lands that inspire the imagination. Harvey is best known for his role in the hit series What We Do in the Shadows, which has been included on more than 20 “Best of 2020” lists by The New York Times, The Hollywood Reporter, Rolling Stone and many more. https://disneynow.com/shows/mickey-mouse-funhouse

A new material could make seawater drinkable within minutes and could even solve the world’s freshwater shortages. Researchers say their new technology of removing salt from seawater is designed to last more than fourteen times longer before it needs to be replaced than similar current technology.(https://bit.ly/2VX2Cpa)

A new study claims apes judge each other by their politeness. (https://bit.ly/3yJrijc)

A veteran Florida middle school teacher was charged with drug trafficking after deputies found multiple grams of fentanyl, methamphetamine, and heroin in his RV. Jeffrey Scott Brake, a 52-year-old math teacher at Citrus Springs Middle School, was busted after two search warrants executed at his home and adjoining RV revealed a host of “life-threatening” drugs and related paraphernalia. Deputies first found a glass pipe in Brake’s pocket that tested positive for meth before searching the RV and discovering two eyeglass cases. Three clear plastic baggies inside the cases contained substances that later tested positive for meth, heroin, and fentanyl. Brake allegedly had 1.8 grams of meth, along with 2.3 grams of heroin and 4.1 grams of fentanyl stashed away in the cases. “Detectives further located a credit card issued to Brake beside a digital scale within the RV,” sheriff officials said. “There was also an assortment of firearms, prescription pill bottles prescribed to Brake, and a variety of drug paraphernalia present.” District officials said in a statement that Brake, who remained jailed Wednesday on $41,000 bond, has worked for Citrus County District since 2001. (https://bit.ly/3lYrM1m)

“South Park” creators Trey Parker and Matt Stone have officially purchased the Casa Bonita restaurant in Colorado that was made famous by the hit show. (https://bit.ly/3xNrVac)

Ben Affleck and Jennifer Lopez are continuing their very public love tour, as they were photographed grabbing a bite with the singer’s 13-year-old daughter, Emme. (https://pge.sx/3xFW9fr)

Jennifer Lopez has further cemented her rekindled relationship with Ben Affleck by deleting every trace of most recent ex, Alex Rodriguez, from her Instagram. (https://pge.sx/37HzCnR)

A woman in China demanded compensation from a restaurant after her daughter accidentally ate half a worm in her meal. But to prove the worm was harmless the restaurant manager ate the rest of the creature.

In China, a couple of amateur gardeners decided the best way to quickly grow their plant and flower gardens was to steal. So the suspects stole potted plants from restaurants and community buildings. In all they stole more than 100 potted plants and flowers before being caught.

A new report reveals models have been paying to be on the cover of Maxim and Playboy magazine. (https://bit.ly/3xFVhrb)

The first live Asian giant hornet of 2021 has been spotted in Washington state. (https://fxn.ws/2VZGHOh)

A dangerous Chinese fugitive tried to cross illegally over the border with a passport belonging to another person. To complete his disguise he had asked a local surgeon to glue on fake ears. Unfortunately they came unstuck just as he was crossing passport control.

According to a new report, UK heir apparent Prince Charles believes sexual assault allegations against Prince Andrew are now an “unsolvable problem” that will forever bar his brother from returning to public life. 61-year-old Andrew was booted from royal duties in November 2019 after his disastrous attempts to justify his friendship with late pedophile Jeffrey Epstein and accused madam Ghislaine Maxwell. (https://bit.ly/3scm6Cj)

Queen Elizabeth is footing the legal bills for Prince Andrew as palace aides express doubts about the royal’s account of his dealings with Virginia Giuffre, who sued him in Manhattan federal court for alleged sexual assault this week. According to a report in the Times of London, Lawyers for the Prince are also desperate not to have him go to trial in the U.S. (https://bit.ly/3CMAkyt)

A man in Florida spent several days trying to fish out a spiny-tailed iguana that he found out of his toilet, before calling experts to remove the lizard. Kurt Hilberth first discovered the reptile thrashing around in the toilet when he went to the bathroom on July 24th at his house in Hollywood to brush his teeth. After encouragement from his family, Hilberth wore protective gloves and went to fish the beast out of the toilet, but it kept swimming back down so it couldn't be caught. Three days later, he nearly caught it. "I was able to grab him by his back legs and part of the tail. I was pulling out [and] he was pulling in. The tail was going back and forth. Water was flying everywhere. It was total chaos inside this small bathroom," Hilberth told WFOR, a local news channel. "Unfortunately, I was left with merely a handful of tail." The lizard swam back down the toilet, out of reach, after its tail broke off in Hilberth's hand, which was still wriggling when he moved it outside. He then decided it was time to call the experts to remove the reptile. Trapper Harold Rondan from Iguana Lifestyles placed a stick in the toilet. He was later able to grab the creature and remove it, after it crawled onto the stick. Hilberth believes the lizard crawled into his toilet through the sewage vent stack on his house roof, so he fastened metal mesh to it to prevent it from happening again. (https://bit.ly/3xmY88b)

A Yukon man is facing ninety years in prison after being linked to 67 alleged storage unit break-ins around Yukon. 36-year-old Joseph Tucker allegedly hit two companies in Yukon between June 19th and July 6th. Court documents said he ripped the unit doors off their tracks causing around $2,000 in damage to each one. However, those weren’t the only two places. “It really shook me up and made me feel angry that someone would do that to us,” said Martha Crawford, an owner of a storage unit that was broken into. Martha Crawford owns one of 10 storage units that were allegedly hit by Tucker at a third location. “It just feels like you’re violated when people go in there and take your stuff,” Crawford said. Tucker is being charged by prosecutors for the break-ins at 10 units. However, he is now being linked to the 67 other break-ins at the two other Yukon locations. So, all in all, Tucker is facing 10 counts of second-degree burglary and 10 counts of malicious injury to property, plus any charges that may come from the previous 67 break-ins. (https://bit.ly/3xtelbP)