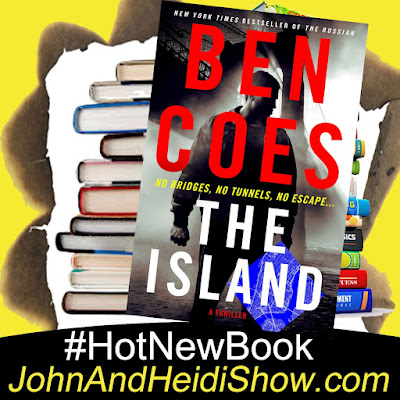 New York Times bestselling author Ben Coes’ latest novel THE ISLAND is a page-turning thriller that pits the CIA against Iranian terrorists trying to take over the Federal Reserve and island of Manhattan, highlighting different ways we are still open to attack. https://amzn.to/38dGrhf

National Kiss and Make Up Day

A new study finds that N95 Masks are far more effective than surgical cloth masks when it comes to protecting people against COVID-19. (https://bit.ly/2UJeHOw)

THE SIX WORDS WOMEN HATE MOST
According to a survey they are moist, squirt, panties, chunky, curd and flap.

Brazilian police took a parrot into custody after he was believed to be conspiring with his drug-dealing owner who had been busted twice before. When police arrived for the drug raid, the parrot repeatedly warned his owner, “Mummy, police.” Although the warning calls were loud and clear during the wild drug bust, no matter how many crackers they offered the parrot during further interrogation, the bird remained silent. The parrot will live out the remainder of his days behind bars at the Teresina Zoo.

Scarlett Johansson has given birth. (https://bit.ly/3y1vwBG)

After months of being together non-stop Ben Affleck was seen celebrating his birthday without Jennifer Lopez. (https://yhoo.it/3g7RDjE)

Ben Affleck and Jennifer Lopez brought their kids to a showing of the play "Hamilton" in Los Angeles. According to TMZ, the couple was also seen kissing with their masks on. (https://pge.sx/2WiXfR2)

A new report claims the pandemic has led to an increase in homeowners renting chickens. (https://bit.ly/3mh1is9)

A video of a race horse fleeing a track in Henderson, Kentucky and running on a crowded Highway has gone viral. (https://bit.ly/3ke38HB)

Shoppers were in for a shock in Australia when a 10-foot python was seen poking out of a supermarket shelf. (https://bit.ly/3j3Bq17)

Are you a member of a book club? If anyone in your club listens to the audio version do other make them feel guilty for “cheating?” University of Virginia psychologist Daniel Willingham was asked the “cheating” question fairly often, especially since he published a book on the science of reading. Growing tired of the question he wrote a blog post addressing it. If, he argued, you take the question from the perspective of cognitive psychology — that is, the mental processes involved — there is no real difference between listening to a book and reading it. So, according to that understanding of the question: No, audiobooks are not cheating. “Cheating” with an audio book suggests that the listener got some reward without putting in the work. But Willingham said that’s not true. Researchers have studied the question of comprehension for decades, and “what you find is very high correlations of reading comprehension and listening comprehension.”

Sharks existed before trees. Trees are young'ns compared to the geezer sharks that rule the sea. Sharks have existed for around 400 million years, while trees became their own official species only 350 million years ago. Other notable animals that outlive our leafy ancestors are the horseshoe crab as well as the jellyfish.

An endangered giant panda in Singapore has given birth to a new cub. The cub's mother Jia Jia was impregnated through artificial insemination.(https://reut.rs/37UdB5n)

Authorities in Oklahoma were called to a report of "a body in the river," but when they reached the "corpse," they discovered that the swimmer was very much alive... and merely relaxing in the shallow water. In a Twitter post, the Tulsa Fire Department said that crews responded alongside the Tulsa Police Department and EMS when callers reported "a body in the river." "We launched a boat and discovered that the man was just lying in the water," the tweet said. A video included in the post shows the man sitting up when firefighters reached him and started checking for signs of life. (https://bit.ly/3z8KFmk)

A Washington, DC, man was busted with a homemade “ghost gun” minutes after he showed the firearm on Instagram. The social media maven, identified as Ryan Parker in a criminal complaint obtained Tuesday by the Daily Beast, allegedly showed off his 9mm handgun — which he had personally converted to fire fully automatically — during an Instagram Live broadcast Saturday. The footage depicted a suspect police say is Parker wearing a black hoodie and a blue medical face mask inside a vehicle while holding the gun in his left hand. “The handgun had a green lower receiver with a black string tied around it and a silver slide,” the complaint reads. “Attached to the firearm was a black drum magazine.” The firearm also had a blue “giggle switch,” an after-market accessory that makes a semi-automatic handgun capable of fully automatic firing — effectively making it a machine gun. Parker aimed the weapon that appeared to be a “fully functional handgun” directly at the camera during his live broadcast, which was spotted by a Metropolitan Police Department officer. Parker, who was known to cops and frequently hung out near the Fort Chaplin Apartments in northeast DC, was taken into custody “within minutes” of ending his Instagram broadcast. (https://bit.ly/3CI3cYJ)