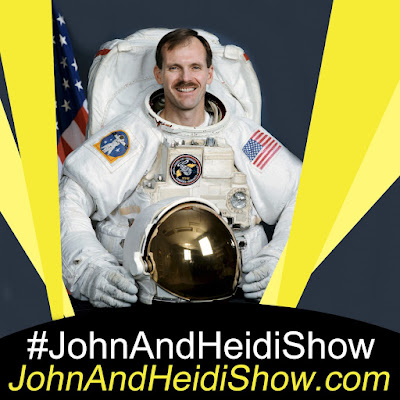 Steve Smith is a former NASA astronaut. Steve traveled 16 million miles in space, flew on 4 space shuttle missions and performed 7 spacewalks, including 5 to repair the Hubble Space Telescope. Smith’s spacewalk time places him in the top ten on the all-time American and World spacewalk duration lists.

We will talk about a fantastic and timely documentary ZERO GRAVITY playing at several festivals over the coming months. Will be on VOD nationwide shortly
https://www.youtube.com/watch?v=Dy22kUPPJAI

According to researchers, only one in five cocaine users wind up becoming addicted to the drug. This study goes on to say that while serotonin levels rise from cocaine consumption, scientists believe it actually could be the reason more people don’t become addicts. (https://bit.ly/3hvjZoP)

A new survey reveals that half of Americans simply knew their partner was “the one” the instant they met them. According to the results, it took the typical respondent two years to decide whether they wanted to be with their partner for the rest of their lives. (https://bit.ly/3tGDWhj)

An Ohio woman reportedly woke up to discover a burglar napping in her guest bedroom after he had broken in overnight, taken a swim in her outdoor pool, and even eaten the family’s leftover chicken. “He just helped himself to everything in our house,” Stacy Steadman told the Associated Press of the bizarre break-in, which occurred at her family home in Canton on Monday morning. Steadman — who lives with her husband, son and brother-in-law — said she saw that a light was on in the spare room, where she then found the not-so-smooth criminal snoozing. The quick-thinking gal — whose husband, Raymond Pearson, had already left for work before the invasion — woke up her brother-in-law, Bryant Pearson, who chased the intruder out of the home. It remains unclear how the man entered the home, although Steadman’s husband had spied the guy walking in the street shirtless before he left for work at 4:00 a.m. He reportedly waited until the wackadoo passed by before driving off. Thankfully, the sleepy chicken-snatcher was arrested by police, who suspected that he was intoxicated and brought him to a hospital for an examination. The man has since been slapped with a burglary charge and issued a court summons.(https://bit.ly/3z9dnlX)

Jennifer Aniston did an awkward interview on British Morning TV in which the host interrupted her several times and appeared confused by her answers. (https://pge.sx/3A0XfnX)

It’s been a while since we’ve heard anything about the True Lies reboot, with the second attempt at turning the classic Arnold Schwarzenegger blockbuster into a TV show being announced back in February, four years after a previous reboot stalled. Now we know that Steve Howey, fresh off an eleven-season run on Shameless, has been cast as Harry Tasker, the role played by Schwarzenegger. Similar to the film, the True Lies pilot will follow happily married family man Harry as his wife and daughter remain oblivious about his real job. Of course, they become drawn into an adventure that blows the doors to his secret life wide open, puts his spouse in harm’s way and ends up reigniting the sparks of their relationship as they team up to save the world.

Prince Harry and Meghan Markle have landed a coveted spot on Time magazine’s 100 Most Influential People list this year. (https://pge.sx/3nzujju)

SpaceX has announced it will be launching a civilian crew into orbit. (https://yhoo.it/2XjiBi2)

New York City police had to rescue a man who fell thirty feet into a storm drain. (https://fxn.ws/2YZHHDo)

Authorities say a suspicious package in a Charleston, South Carolina, suburb turned out to be quite harmless. The investigation by police began when a bomb threat was received. The road was closed. An employee at a nearby store reported that he saw a woman force an oversized package into a mailbox nearby. The package was then retrieved, and it contained a wedding dress that was being returned via mail.

Shoelaces untie themselves because the knot is subjected to forces of up to 7G with every step the wearer takes.

A man is behind bars after police say he carjacked a person while armed with a knife following the BYU vs. Utah football game Saturday evening. Arresting documents show the suspect, 42-year-old William Jerome Ellison of Salt Lake City, was booked into jail for aggravated robbery, interfering with an arresting officer, and failing to disclose his identity. According to the BYU Police Department, an officer responded to a man’s 9-1-1 call saying Ellison attempted to get into his car while threatening him with a knife near the BYU administration building. Ellison was later located by the officer and was told to get on the ground. While the officer waited for backup to arrive, police said Ellison stood up and began to fight. “Thanks to the help of two citizens who jumped in to assist Officer Rigby this situation didn’t escalate, and the suspect was taken into custody without anyone getting hurt,” the BYU Police Department wrote in a Facebook post. The BYU Police Department said Ellison has a “lengthy” criminal history, including serving prison time for a homicide. (https://bit.ly/2VDYZo6)

Two Connecticut woman were arrested after they flipped out on two young kids who bothered them on a JetBlue flight into the Constitution State. 21-year-old Kaylene Thalia Valentin and 23-year-old Desiree Elizabeth Goffe allegedly spewed vulgarities at a 2-year-old and a 4-year-old who tapped and kicked their seats on the flight into Bradley International Airport. “Goffe and Valentin responded inappropriately by directly yelling and cursing at the children, causing the passengers on the plane to be nervous and the kids and parents to be scared,” the report stated. “Goffe and Valentin cursed and used vulgar words towards the children and parents, and multiple passengers approached responding Troopers once they deplaned.” Troopers were called to the airport in Windsor Locks due to a complaint from the flight’s captain. Cops took the two women and victims from the plane. The two women were slapped with charges of breach of peace and impairing the morals of a minor and released on $5,000 bonds. A JetBlue spokesperson didn’t immediately respond to a request for comment from The New York Post Monday night. (https://bit.ly/3Ej9W03)