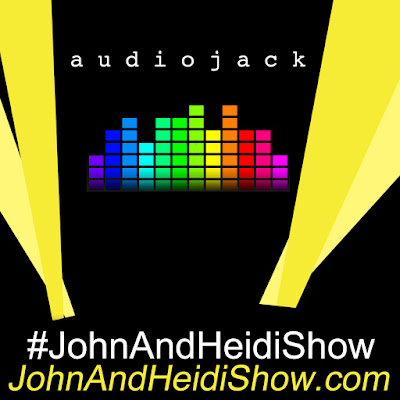 Our guest this weekend is David Tobin the founder of AudioJack, an interesting new concept that wakes up your imagination! Learn more at www.AudioJack.com

Researchers from Uppsala University in Sweden report that the sleeping patterns of men may be more sensitive to the lunar cycles of the moon than those of women. The research team concludes that men may sleep poorly during the first half of the lunar cycle. (https://bit.ly/2Z3ZDgh)

According to a new poll, a majority of young people think humanity is doomed. (https://bit.ly/3Ch0Mz6)

On Sept. 11th, Idaho Falls Police Officers responded to a residence for a report of a physical disturbance involving a knife. Upon arrival on scene, Idaho Falls Police Officers located a male victim who had a laceration on one arm, his hand, and a puncture wound on his left buttocks all consistent with injuries from a knife. The victim stated that he and the suspect, Ashley Harper, were arguing and that Harper wanted to drive but she has been drinking and was unsafe to drive. The victim stated he attempted to stop Harper from driving and the argument escalated until Harper eventually lunged at the victim with a knife causing injury. The victim stated he was further injured on his hand when he attempted to take the knife from Harper. Harper spoke with Officers and agreed that she and the victim had argued and fought but stated that she had been held down and was frightened. Harper refused to speak to details of the incident, or the knife involved. Ultimately Harper, a 35-year-old resident of Idaho Falls, was taken into custody without incident and was transported to the Bonneville County Jail where she was booked for aggravated battery with the use of a deadly weapon. (https://bit.ly/3lh4hig)

Fox television's president says there are some discussions about a revival of the hit show 24.

Barring any unforeseen circumstances, this year's 95th Macy's Thanksgiving Day Parade will feature the usual giant balloons and in-person overpacked crowds after going virtual last year due to the pandemic. Last year's Macy's Thanksgiving Day Parade was radically pared down, with no crowd and many pre-taped performances, plus a smaller mix of live and pre-taped balloons traveling only one block because of the pandemic, resulting in a strange and underwhelming event. Macy's says all volunteer participants and staff will be required to be vaccinated and they must wear masks. They've also reduced the number of participants by 10 percent to 20 percent, or about 800 to 1,600 fewer participants. Despite that reduction, Macy’s says that its signature giant character balloons will once again be flown.

Spanish police arrested a man for speeding at 110 miles per hour. What makes this story strange is that not only was the driver wearing only a Speedo, his four male passenger as well. They were not arrested but did have to find a ride to their destination since the driver’s car was impounded.

A spooky historical residence in upstate New York that is allegedly home to nine ghosts recently hit the market for $444,444 — a listing price that’s a nod to the paranormal. The Enslin Mansion in Troy has been featured in shows on Discovery ID and TLC and its queen bedroom has been listed on Airbnb for those daring enough to stay the night. (https://bit.ly/3tEUsyk)

The city of Portland, Oregon has named a recently completed pedestrian and bicycle bridge after the “The Simpson’s” famous, god-fearing neighbor, Ned Flanders, to promote the goodwill and kindness inherent in the fictional character. (https://bit.ly/2YMKa3P)

A real-life version of Moe's Tavern from "The Simpsons" has opened in Springfield, Pennsylvania. (https://6abc.cm/2YSK0YR)

It’s estimated that the common housefly can have as many as half a billion bacteria on its body.

Police in Japan (Beppu) have accused a man of stealing hundreds of pieces of women's underwear from laundromats. Authorities were first alerted by an unnamed 21-year-old female college student, who accused the 56-year-old man of pilfering six pairs of underwear from her at a laundromat on August 24. The city police showed up at the man's apartment days later, where they found 730 pieces of underwear.

A man in Ireland in his 50s has been charged with theft amounting to several hundred thousand dollars after he claimed pensions for his dead mother and father over a 33-year period. Don O'Callaghan was in court Tuesday and was charged with 73 counts dating back more than three decades.

In Florida (Pinellas County) on Sunday deputies responded to a report of three suspicious males in a neighborhood. When deputies arrived on scene, one of the subjects, later identified as 18-year-old Myles Abbott, fled. K-9 deputies began a track and as Abbott ran, he fired a gun at nearby citizens. Abbott continued to flee and climbed onto the roof of a private residence. At some point while he was fleeing, Abbott fired his gun and struck himself in the right thigh. Deputies from the Flight Unit located Abbott on the roof and advised he was armed with a gun and was pointing it toward deputies that were located on the ground. Deputies attempted numerous times to communicate with Abbott from an armored vehicle, but he would not surrender. After nearly 6 hours, specialized equipment and bean bag rounds were used to force Abbott off the roof and he was taken into custody.

Artist Sends Nonverbal Autistic Teen The Butterfly Machine That Brought Him So Much Joy https://www.sunnyskyz.com/good-news