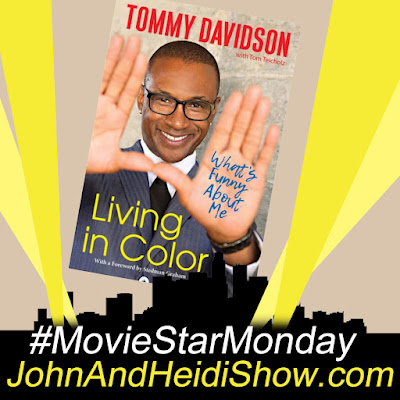 This #MovieStarMonday we visit with Tommy Davidson. Actor, Author and all around nice guy! HIS BOOK - https://amzn.to/3DQ4dhR

Half of Americans die almost broke.

The average woman owns 20 pairs of shoes, but only wears 5 of them, according to a study. 90 percent of women say they have a pair that have never left the closet. Top reasons some shoes never leave their box:

• They have an impractical heel

• They don’t match any outfits

• Too expensive to damage

• They were an unwanted gift

A woman in Brazil woke up to find an intruder taking a shower and doing his laundry at her home. She was able to call police, who arrested the guy as he came out of the bathroom with a towel around his waste. He had booze on his breath.

“The View” will fill Meghan McCain’s slot with a rotating cast of guest conservative co-hosts when it returns for its 25th season. First up will be former Utah Congresswoman Mia Love, who will join moderator Whoopi Goldberg and co-hosts Joy Behar, Sunny Hostin and Sara Haines for the first week, beginning Sept. 7. This will be the first time all co-hosts will be in the studio together since March 2020. Meghan McCain left the show in August after 4 seasons.

Ben Affleck and Jennifer Lopez have been going strong for the past few months and now he’s starring in a new commercial with her mom. Guadalupe “Lupe” Rodriguez appears with Affleck in a new ad for WynnBET’s new sports gambling app. At one point in the ad Affleck walks past Rodriguez while she plays a slot machine. Interestingly, WynnBET reported that Lupe won $2.4 million on a slots game back in 2004 – the same year that Affleck and Lopez ended their first relationship.

Toymakers are saying that the global shipping crisis and labor shortages could limit their ability to keep stores stocked throughout the holiday shopping season. CEOs of 2 major toy companies have gone on record as saying they fear supply chain woes and the resulting inflated prices will mean many children won’t get the toys they want for Christmas. The bosses, whose companies sell brands including Fisher Price, K’nex, Care Bears, Little Tykes and Bratz, say not only have prices of products increased by about 23%, the cost shipping via container has gone up from $3,200 to $22,000. AND a trucker shortage is hurting efforts to stock warehouses and ultimately move toys onto store shelves. Both executives suggest parents get their holiday shopping done early.

A giant rubber ducky made a surprise appearance in a Maine harbor, and officials have no idea who put it there — or why. Harbor Master Katherine Given says the giant yellow duck, with the word “Joy” written in large letters on its front and estimated to be 25 feet tall, appears to be anchored in the shallow part of the harbor. She says because it is in shallow water, it isn’t a navigational hazard, and “a lot of people want to keep it here.”

A study found that constant exposure to artificial light may weaken bone density.

Polish construction firm Budimex and refiner Lotos have created a floral-scented asphalt. Why? According to the companies, it’s not to improve conditions for people living in large cities without ready access to nature. And it’s not for the sensory enjoyment of commuters who must spent hours fighting traffic every day to get to work. It’s to improve working conditions for road builders. The new bitumen contains a mixture of natural and synthetic essential oils, most of which neutralize the typical smell of asphalt, while the remaining ones add a more pleasing scent. A foreman was quoted by the companies as saying that at times, he can detect the scent of flowers, which made “working more pleasant”.

A Texas woman is suing Starbucks over first-degree burns she suffered, claiming she was given the wrong coffee and then spilled it on herself when she gave it back. Mary Simms ordered some joe on April 14th from a Starbucks drive-thru in Tomball, Texas. The employee informed Simms that she was given the wrong drink and when Simms stopped her car and handed back the coffee, the lid came off and the coffee spilled on her lap. “As a result of the spill, Simms sustained first and second-degree burns causing severe personal injuries and damages,” the suit says. The suit, filed August 19th, argues that Starbucks “knew or should have known of the unreasonably dangerous condition created by the failing lid, hot water and/or liquid of the coffee” and should have warned Simms. The company’s failure to do so constitutes negligence, the suit argues. The suit noted that Simms is seeking less than $75,000 to cover damages including medical expenses, lost wages, the cost of “physical disfigurement” and “past and future loss of enjoyment of life.” A Starbucks spokesperson told Insider that the company is investigating the claims in the suit. Legal actions over hot-coffee burns date as far back as 1992, when Stella Liebeck, then 79, sued McDonald’s after suffering third-degree burns from spilled java. A jury awarded her $2.7 million in punitive damages. (https://bit.ly/3Bfc1aV)

A woman was arrested after police responded to gunshots at a Warren home Monday. Police responded to the house at about 3:30 p.m. for shots fired into a home. The victim told police that she was dog sitting for her friend when her friend’s ex-girlfriend, 26-year-old Trale Kapri Williams, arrived and accused her of stealing her dog. The victim called her friend, who denied that the dog belonged to Williams. According to the police report, Williams started swinging at the victim. The victim then grabbed Williams by her wig, which came off. The victim told police Williams dropped a gun while they were fighting. The victim was finally able to get away from Williams and went inside the house. Shortly after, she heard two shots, the report stated. One bullet broke the front window and damaged a beam and the other lodged into the outside of the home, according to the report. The victim told police Williams left the scene. Police found her vehicle on West Market Street in Warren. Williams was booked into the Trumbull County Jail on five counts of felonious assault and one count of carrying a concealed weapon, and is being held without bond.(https://bit.ly/3gvGMAx)

New Orleans Nurses Stayed Behind During Hurricane Ida Evacuation To Care For Babies In NICU https://www.sunnyskyz.com/good-news/