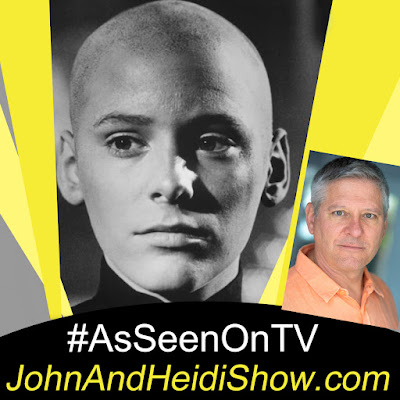 Today we visit with Radames Pera (Young Grasshopper) from Kung Fu on ABC TV. They're getting ready for the 50th Anniversary of that show. He's working on an event to honor the cast, all of the regular members are gone, other than Radames.

A study discovered that up to 35 percent of us have had a text conversation while still sleeping. The conversation, which is mostly gibberish, starts when our phones start beeping or buzzing, prompting our brains to go into auto-pilot and return the text. It’s not always gibberish, though. The study found men usually text about food while women tend to get romantic.

A study finds that fewer working-class Americans are going to church.

A Delray Beach man allegedly fell asleep in his car while in the Wendy’s drive-thru late Monday night. According to a police report reviewed by BocaNewsNow.com, Steven Wulf told officers — who apparently had to work quite diligently to wake him up — that he had consumed three rum and cokes at O’Brien’s before the Wendy’s incident. From the police report: “The officer knocked on the window of Wulf’s vehicle for about two minutes while telling Wulf to roll the window down, and he continued to fumble with the gear shift and the air conditioner before rolling the window down. Wulf finally unlocked the door and exited the vehicle, stumbling out. When Wulf was asked if he knew what day it was, he swayed back and forth to keep balance and had a blank look on his face. Wulf could not advise what day it was or where he was.” The police report also said, “While speaking to Wulf, I could smell the odor of alcohol emanating from his breath, and he was slurring his words.” According to the arrest report, Wulf refused a breath alcohol test. He was booked into the Palm Beach County Jail and later released on his own recognizance. A court date is currently pending. (https://bit.ly/3B2Dc8O)

Paramount is suing its insurer for refusing to cover the vast majority of its losses due to pandemic-related shutdowns on “Mission: Impossible 7.” According to the suit, “Chubb”, the studio’s insurer, says it will pay only $1 million for COVID-19 losses under its “civil authority” policy. Production was delayed 7 times between February 2020 and June 2021, at least 6 of which were due to the pandemic. Paramount had a “cast insurance” policy for the production, with a $100 million coverage limit. Such insurance is intended to cover losses that result when a film’s key personnel — such as star Tom Cruise or director Christopher McQuarrie — is unavailable due to sickness, death or even kidnapping.

Febreze has come up with a new way to fool your guests into thinking you actually clean house: A “scratch ‘n sniff” fabric spray. Using their “breakthrough touch-activated scent technology,” Febreze is rolling out “Unstopables Touch Fabric Spray”. As you know, with regular Febreze spray (which isn’t going anywhere), you can spray all you like, but once that ocean breeze scent dissipates, you’re left with the usual smell of wet dog and last night’s fish dinner. The new Febreze Touch supposedly stores its scent in fabrics. The idea is that you spray the couch, pillows, curtains, any soft fabric, and the fresh smell re-emerges every time they are touched. A press release from Proctor & Gamble says to “Think scratch ‘n sniff, taken to the next level”.

Cats prefer a free meal rather than working for their food, according to a new study. Researchers from UC Davis’ School of Veterinary Medicine say while most animals actually prefer to hunt for their meals, their experiments show that our freeloading felines would rather eat from an open tray of food than retrieve their meal from an easy-to-complete food puzzle.

It seems there’s a new dating trend, and it’s even grosser than “zombie-ing”… or “flea-bagging”. Dating experts have coined the term “roaching” (Yep, like the bugs). What is roaching? You know how cockroaches multiply in hiding? That’s how roaching got its name – It means your partner (if he or she is a roach) may have many hidden sexual partners. According to one expert, even if you’re aware of one other partner, you could realize, as time goes on, that there are, in fact, many. Some clues that you are being roached: Your partner doesn’t make or keep plans; they aren’t looking to get serious; or if they seem to always keep you at “arm’s length”.

When emergency services in France got a call about a “body” in a canal, they prepared for the worst. Police and firefighters raced to the scene, but found it was a false alarm, and an amusing one at that. Officers at the Gendarmerie de la Loire, in central France, were called by a couple on a bike ride in Briennon. Cycling next to the canal, they thought they saw a corpse taped up in a black bin bag floating next to a heap of branches and reeds. The couple called police and they hauled the body back to the banks with the help of firefighters. To all of their amazement and relief, it turned out to be an inflatable sex doll. The Gendarmerie has now invited the doll’s owner to visit the police station to collect “her.” They wrote: “A couple on mountain bikes discovered a floating mass in the canal that could resemble a human corpse. Through two tapered garbage bags, we distinguished two legs and a trunk. With the help of firefighters, the floating object was brought back to the banks. Verdict: a silicone doll truer than nature that didn’t lack air. Obviously, her owner can pick her up in Charlieu.” (https://bit.ly/2WgYQHD)

A Philadelphia cheesesteak shop owner who was stabbed in the neck by an employee in a caught-on-camera attack says he didn’t even know the knife was still lodged in him. Steve Mullan was attacked by 43-year-old employee Sean Walklett in the kitchen of Leo’s Steak Shop last Friday. Surveillance video obtained by NBC10 allegedly shows Walklett lunging at his boss from behind and thrusting a 10-inch knife into his neck. With the knife still poking out from his neck, Mullan could be seen fighting back against his employee. As Mullan repeatedly threw punches, his son grabbed two knives and tried to ward off the employee, the footage shows. After the attack, the store owner said, his son told him: “Dad, you have a knife in your neck … Don’t pull it out.” “It was a vibration like I was being electrocuted … Like I touched a live wire,” Mullan said of the stabbing. A police officer who was directing traffic on the street outside the store responded and had to tase Walklett before he could be taken into custody. Walklett, who had worked at the store for a year, has been charged with attempted murder, aggravated assault and a slew of other charges over the attack. Walklett’s bail has been set at $950,000. (https://bit.ly/3DkhNKb)

A man's plan to sell his high-performance sports car was upended when he flipped that car on a Pitt County highway. WITN reports that the single-car crash happened around 2:00 p.m. on Monday near N.C. Highway 11. Spencer Everette, of Greenville, told WITN that he pulled onto N.C. Highway 11 and “gunned it.” Everette then lost control of the 2020 Stingray corvette, ran off the road, and into a ditch. Everette said he was selling the car Tuesday and the ride was his “last hurrah.” WITN said that Everette wasn't injured in the crash. He was charged with reckless driving. (https://bit.ly/3zgvIP6)

Mom Fights Off Mountain Lion With Bare Hands To Save 5-Year-Old Son
https://www.sunnyskyz.com/good-news