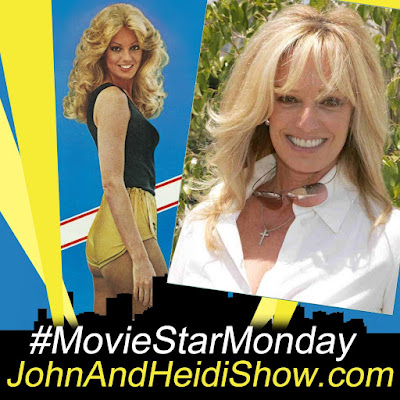 This #MovieStarMonday we visit with Susan Anton, a multi-talented international star for more than 35 years in television, film, theater, and concert venues. She was nominated for a Golden Globe in her first film role, “Goldengirl” in 1979, also starred in Cannonball Run 2, Sharknadio 4 and many more.

Retro TV and The Family Channel will feature the two stars of "Leave it to Beaver."

A survey of 2,000 people finds 6 in 10 have felt the urge to try something outside their comfort zone during the pandemic. That urge may be because the average person hasn’t tried anything new in two months, and for 12% it’s been over a year. (https://bit.ly/3ha2Px3)

A new study finds college-educated women are more likely than ever to give birth to their first child outside of wedlock. (https://bit.ly/3DXJbOh)

Police have arrested a man they say committed several acts of arson at multiple Phoenix Circle K locations. Police arrested 61-year-old Dennis Ray Barrett on August 28th after he allegedly set fire to trash cans inside three different Circle K stores in the Phoenix area. Investigators believe he set the fires to create a distraction so he could steal alcohol. On July 31st, Barrett reportedly set fire to a trash can inside a Circle K near and 32nd Avenue. Police say surveillance footage recorded Barrett setting a fire and then running out of the store with stolen beer. He was able to leave while the cashier was distracted by the fire. Police say Barrett used the same tactic at two Circle K locations on Southern Avenue on August 1st. He reportedly set fires in trash cans inside each store and fled with stolen beer while the cashiers were dealing with the fires. Barrett returned to one of the Southern Avenue stores on August 20th. He reportedly stole beer for a fourth time, but police said he did not use fire as a distraction. In each of these incidents, Barrett allegedly left the stores in a black Ford Edge. Police later learned that the car had been reported stolen on July 28th. Barrett is facing three counts of arson of an occupied structure and four counts of shoplifting. (https://bit.ly/2V0qh7Q)

“No Time To Die” has a new release date – and they really mean it this time. The 25th ‘James Bond’ film will be launched with a worldwide premiere on September 28 at London’s Royal Albert Hall, and will be released in cinemas 2 days later on the 30th. The hotly-anticipated movie – which will be Daniel Craig’s final outing as 007 – has been pushed back several times due to the coronavirus pandemic and for other reasons. Its first scheduled release date was in November, 2019.

Daniel Craig says that the script for his new James Bond film “No Time To Die” was constantly being adjusted while they were filming the upcoming movie. “No Time To Die” was actually one of the first movies delayed because of the onset of the coronavirus pandemic in April 2020. (https://bit.ly/3yUA79u)

James Bond has wrestled out The Rock to become the world’s highest paid movie star. Daniel Craig’s Netflix streaming deals for the “Knives Out” sequels have netted him an estimated $100 million US, according to Variety. That’s twice as much as second-placed Dwayne ‘The Rock’ Johnson, with Will Smith and Denzel Washington tied for third place with $40 million apiece. Jennifer Lawrence and Julia Roberts are tied for highest-earning female actor, with $25 million each.

A New Jersey student has said he is barred from taking classes at Rutgers University because he has not been vaccinated — even though he is only studying virtually from home.(https://bit.ly/3DRhYNk)

A gang of masked thieves stole seventeen cars from a Minnesota dealership. (https://cbsloc.al/2YlZvIn)

The Aldi Supermarket chain has created a new line of alcohol flavored cheeses.(https://bit.ly/2YtOgh6)

Mercedes has created a car that can read a driver's mind and adjust its controls according to their thoughts. (https://bit.ly/3nfaHRq)

Instead of having to worry about jellyfish or sharks, beachgoers in Corsica have to keep their eyes out for…cows. Bovines have literally taken over beaches on the Mediterranean island, and they’re not friendly. Corsica has more than 15,000 cows and they apparently think they own the place after not seeing many beachgoers due to lockdown for the last year-plus. One man was sent to the hospital after being gored in the neck. And in town, cows have been spotted chasing tourists down streets, and a woman was air-lifted to a hospital after suffering a ‘severe leg wound’ from a cow attack as she was hanging her laundry to dry. Cows have also been seen rampaging through picnics. Before you laugh at THAT mental picture, keep this in mind: These cows have horns.

Wasps get aggressive towards the end of summer because they get drunk on fermenting fruit hanging from trees.

With one of the highest vaccination levels on earth, Israel is seeing their most COVID cases per day since the start of the pandemic. (https://cnb.cx/3gL58X1)

When a naked man was spotted running through Lowe’s Home Improvement, witnesses called Greenwood police. 38-year-old Kelvin Lamont Cooper III was arrested Sunday and charged with indecent exposure. When officers arrived, they reported finding the man standing outside at a flower display wearing only a towel to cover himself. He told officers he thought he was being followed by people who were threatening to kill him. The man told police he was hiding behind a post when he heard his pants begin to “beep,” and thought someone had planted a bomb in his clothes, so he removed all of his clothing. When employees saw the naked man, they gave him a towel to cover himself. Police asked the man to dress, but he said he would not because he was afraid his clothes would explode. Officers had to take him to a hospital for medical clearance before he was booked into the county jail. (https://bit.ly/2V0sBvA)

A Melbourne barbershop owner shot and wounded a masked gunman who entered the shop Saturday afternoon and pointed a firearm at several people. The shooting occurred about 3:25 p.m. Saturday at New York Hair Barber Shop, which is located in a small strip mall on Florida Avenue. News 6 partner Florida Today reported that the gunman, identified by police as 24-year-old Palm Bay resident Marlon Mascoe, was shot in the hip. He was disarmed and apprehended at the scene by patrons and employees, and was being treated at Holmes Regional Medical Center in Melbourne. Melbourne Police Lieutenant Ryan Schorer said, “The investigation revealed that it wasn’t related to a robbery. It was actually related to a prior haircut transaction he was unhappy with, or an interaction inside the business.” Mascoe has been charged with aggravated assault with a firearm. (https://bit.ly/3zwPm9u)