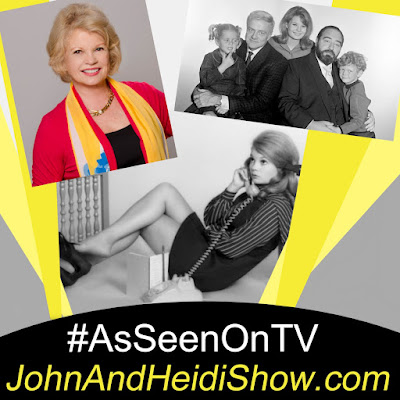 Kathy Garver aka Cissy of "Family Affair”. ...Kathleen Marie Garver is an American stage, film, television, and voice-over actress most remembered for having portrayed the teenaged orphan, Catherine "Cissy" Davis, on the popular 1960s CBS sitcom, Family Affair. Before that, she was cast by Cecil B DeMille in the film The Ten Commandments.

DECADES will honor the 55th anniversary of Family Affair with a weekend binge of 84 episodes starting Saturday, September 11th at 12pm ET. Family Affair turns 55 on September 12th. The series originally debuted on CBS in 1966.

Viewers can find the complete network schedule and where to watch by visiting https://www.decades.com/wheretowatch.

According to a new survey of 2,000 Americans, 4 in 10 people admit that they get less joy out of vacation as an adult, with 47% stating that packing is one of the least enjoyable parts. 51% of respondents said that taking a vacation as a grownup means stressing about covering the cost. (https://bit.ly/3h6nLVI)

A new study shows young adult marijuana users are twice as likely to suffer from a heart attack. (https://cnn.it/3yLNPv6)

We’ve seen some bad parking jobs in Miami in our day, but this latest one in Florida may top them all. On the Gulf Coast of Florida, a man was arrested after his Lexus RX-350 was spotted dangling over the edge of a pier. Pictures on the agency’s Facebook post shows the maroon hatchback, the driver door open and its front portion hanging perilously over the edge. “Officers are conducting a drunken driving investigation this afternoon after the driver of this vehicle found a very unusual parking spot behind Pier House 60 on Coronado Drive,” wrote the department, which made the arrest a few hours later. The driver, 38-year-old Matthew Adams, of Belair Beach, faces a charge for driving under the influence. https://yhoo.it/3ByxxYk

After months of speculation, rumors and even a leak, the first trailer for “Spider-Man: No Way Home” is finally here. The Marvel Cinematic Universe (and Sony) have exploded the multiverse for the third Tom Holland Spidey flick. And yes, that’s Alfred Molina in the final scene bringing back heavily armed villain ‘Doctor Octopus’ for the first time since 2004’s “Spider-Man 2”. The trailer sees ‘Peter Parker’ grappling with the fallout of 2019’s “Spider-Man: Far From Home”, in which the world discovered his secret Spidey identity. He turns to ‘Doctor Strange’ for a spell that’ll wipe everyone’s memories. Of course, it doesn’t go to plan, and a multiverse of madness is unleashed. By the way, although there’s no space in the new trailer for any other Spider-Men other than Holland, but Andrew Garfield and predecessor Tobey Maguire are apparently also be involved in the multiverse-spanning adventure. No Way Home hits theaters Dec. 17. LINK: https://youtu.be/rt-2cxAiPJk

Angelina Jolie has joined Instagram — and she’s using it as a tool for her humanitarian efforts. She made her social media debut on Friday, sharing a letter she received from a teenage girl from Afghanistan amid the Taliban takeover and collapse of the Afghan government. The 46-year-old mom of 6 wrote: “The people of Afghanistan are losing their ability to communicate on social media and to express themselves freely. So I’ve come on Instagram to share their stories and the voices of those across the globe who are fighting for their basic human rights.” Jolie said that she “will not turn away”, but will look for ways to help, and encouraged others to join her.

Angelina Jolie says she feels traumatized from her marriage to Brad Pitt. (https://rb.gy/z0bo5k)

New York Fashion Week will be back in person for the first time in eighteen months and attendees will need to prove that their vaccinated. The five-day event started Sept. 8th, which typically draws 230,000 people to the city — generating $532 million in visitor spending — will be about half its usual size as its organizers take pains to ensure that the event is appropriate for the times. (https://bit.ly/38N4cx6)

After having a $24-million diamond implanted into his forehead, Rapper Lil Uzi Vert says fans ripped it out. (https://cnn.it/2WUxaZD)

In a new interview, Chrissy Tiegen says she's been sober for 50 days. (https://bit.ly/38NIfhg)

A Vietnamese man was sentenced to five years in prison for breaking COVID-19 restrictions and infecting eight people with the coronavirus. A court in Vietnam’s province of Ca Mau convicted 28-year-old Le Van Tri after a one-day trial. (https://bit.ly/3BWoCQL)

After stealing armfuls of clothing from a Tommy Hilfiger store, 23-year-old Ramiya Johnson and a female sidekick ran out an emergency exit and fled in a Cadillac Escalade driven by a male accomplice. Following an alert issued for the SUV, a cop pulled over the vehicle two hours after the heist at an outlet mall in Orlando. Inside the getaway car police found four “Tommy Hilfiger shopping bags filled with clothes.” Investigators estimated that the stolen merchandise--which still had anti-theft sensors in place--was worth in excess of $750. In addition to the garments in the shopping bags, cops noticed that Johnson and 26-year-old Kelah Hoffman “were both wearing Tommy Hilfiger shirts.” Johnson’s “Essential Logo” polo actually still had its Hilfiger hang tag and $59.99 price tag attached to the collar. Johnson reportedly confessed to the Hilfiger theft, claiming that Hoffman offered her $50 to participate in the retail larceny. Hoffman declined to answer questions about the theft. 50-year-old Driver Frank Germain told cops that he was paid to pick up the women and “drive them for the afternoon.” While acknowledging he saw the merchandise in the SUV, Germain said he “did not question it.” Johnson, Hoffman, and Germain were arrested and charged with burglary, grand theft, and retail theft, all felonies. (https://bit.ly/3yuz13J)

An Illinois woman was busted Saturday for allegedly using a phony COVID-19 vaccine card with a glaring typo to travel to Hawaii. The card allegedly submitted online to Hawaiian authorities by 24-year-old Chloe Mrozak misspelled Moderna as “Maderna,” according to court documents obtained by HawaiiNewsNow. Mrozak flew into O’ahu on August 23rd and state investigators were tipped off to the suspicious document. Investigators were initially unable to track down Mrozak because the hotel reservation she left with screeners turned out to be incorrect, court documents show. But she was caught when she returned to the airport to fly out last weekend. The fraudulent vaccine card claimed Mrozak was vaccinated in Delaware, but officials found no such record in the state. Mrozak was being held on $2,000 bail on accusations she falsified vaccine documents. (https://bit.ly/3yAfjne)