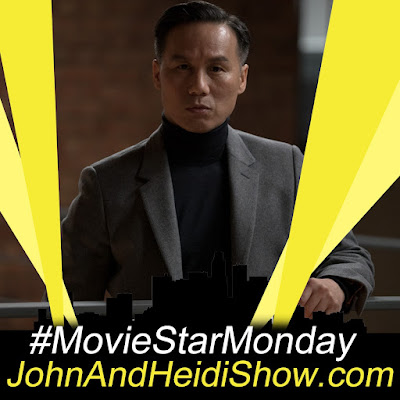 This #MovieStarMonday we visit with BD Wong (Jurassic Park, Mulan, Gremlins; Secrets of the Mogwai...TV shows like Gotham, Mr Robot, American Horror Story and MUCH MORE)

We will chat about that but also about his role in Comedy Central's "Awkwafina is Nora From Queens" Season 2 premiered August 18th.

A new study reveals college students are using hallucinogenic drugs now more than ever before. (https://wapo.st/3za02do)

A new study claims marijuana among college students is now at an all-time high.(https://wapo.st/2XnBRv5)

Drugs were dropped from a drone on the property of Brunswick Academy, a private school in rural Brunswick County. But the Brunswick County Sheriff’s Office says the package, which contained marijuana, tobacco and cellphones, was likely intended for the nearby Lawrenceville Correctional Center. It also weighed about five pounds. Police believe the package was dropped on school grounds around 5:40 a.m. Monday. Shortly afterward, witnesses say individuals in a sedan grabbed the drone. Police responded to the incident after a school employee reported a suspicious package at 8:24 a.m. Police say the Lawrenceville Correctional Facility has had issues with contraband in the past, including the involvement of staff members and other drone-related incidents. “It’s like something you would see in Hollywood, like watching one of these sitcoms or one of these prison movies, and you see that and think ‘well, that’s not reality,” Brunswick County Sheriff Brian Roberts said. He says just before 6 a.m. yesterday morning, a school bus driver made their first stop at Brunswick Academy. “They [the bus driver] saw these green blinking lights coming in at a distance and something coming to the ground. He was not real sure what it was. Immediately this car comes flying in, passenger door comes open and they reach pick up this thing.” It was a drone. Sheriff Roberts says when the bus driver returned after their route, their supervisor was called, and the package was later discovered. A dark-colored sedan is now in question. Tonight, the private company that runs the jail responded. A spokesperson for the GEO group said in part “like many correctional facilities across the country Lawrenceville Correctional Center faces challenges related to the use of drones for the introduction of contraband in a correctional setting.” And contraband at Lawrenceville has been an issue. Sheriff Roberts says at least four corrections officers were arrested this year alone for bringing drugs to the jail. “Working with the administration of that place we’ve been arrested a lot of staff members for bringing in contraband, a lot,” Roberts said. Sheriff Roberts says they’ll look at data on those two cellphones to try and find suspects. Anyone with information is asked to contact the Sheriff’s Office. www.wate.com/news/drone-drops

The Matrix Resurrections is one of the most highly anticipated movies of recent years. And now, some new footage and a new teaser trailer website is giving fans a small taste of what they can expect when the film hits theaters. The teaser comes via a new website called WhatIsTheMatrix.com. Rather than simply being a trailer, the website is an interactive experience. It starts with visitors clicking on a blue or red pill. The site then generates a unique teaser trailer that features footage from the film and dialogue from the film’s characters. According to Warner Bros sources, there are over 180,000 possible teaser trailer combinations available at the present time. https://thechoiceisyours.whatisthematrix.com/

The Matrix Resurrections is the latest film in the popular Matrix series of sci-fi movies that launched in 1999.

A trailer for the upcoming fourth Matrix movie has been released. (https://bit.ly/2XgFrqd)

Ever ended up paying $20 for your morning latte just because you were guilt-tripped into participating in a 'pay it forward' chain? Well turns out your random act of kindness wasn't just inconvenient for your bank account — it's also kind of irritating for your barista. A post on Facebook written by Hannah Wilson, “a former Starbucks barista of nearly 7 years,” had something to say about the popular ‘pay it forward’ trend that happens whenever you go to the drive-through. She says that the whole trend is “extremely annoying and makes everything confusing,” and that there are better things to do instead of ‘paying it forward’. She wrote: "I just wanted to say publicly as a former Starbucks barista of nearly 7 years, since the current employees can’t say it: Pay it forward is extremely annoying and makes everything confusing. It makes it easy to hand out the wrong drinks, and just sucks. Instead of paying for the people behind you, who can probably afford their own stuff since they’re in line intending to pay, tip the people making your drinks who have been working understaffed for months."

Each year in the U.S. roughly 23,000 adults go to the emergency room for injuries sustained while sledding!

If you kicked a ball in space, it would keep going forever (unless it hit something).

A dog ran onto the field at an Irish women's cricket semi-final match and stole the ball from the game. (https://bit.ly/3CeUYWR)

An attorney was arrested after he took a stroll down a Texas beach dressed as slasher movie villain Michael Myers – complete with a fake, blood-covered knife. Galveston attorney Mark Metzger turned to cosplay humor dressed as the silent “Halloween” killer when Hurricane Nicholas shut down courts for the day on Monday. Metzger’s stroll got viral attention on social media – and from local police. Not everybody knows what’s going on but I think it’s pretty clear that it’s a prank,” he told KTRK. “It’s something to be laughed at, it’s not a crazy guy with a chainsaw walking around it’s a known fictional character with a kitchen knife.” Metzger said when police first approached him, he tried to stay in character as the killer but he soon realized authorities meant business and apparently even drew their weapons. The Galveston County Daily News reported that someone had called 9-1-1 “It felt like a scene outta ‘Scooby-Doo’ after he handcuffed me and he pulled the mask off,” Metzger said in the KTRK interview. “It was like, ‘Oh, I would’ve gotten away with it if it wasn’t for those meddling Karens.’” He was cited for disorderly conduct and released, a police spokesperson told the Daily News – but Metzger said he was “still fuzzy” about what he had done that was illegal. (https://bit.ly/3hAZEOR)

A man using a Walt Disney World-owned iPad with access to a private company application was caught giving unauthorized tours at one of the parks and using the technology to skip to the front of ride lines. According to an Orange County Sheriff’s Office report, a deputy was called to Disney’s Hollywood Studios in regards to someone trespassing. When the deputy arrived, he learned from another deputy working off-duty at the park that a 30-year-old man had been taken into an office by a Disney manager to be trespassed from the property. According to the report, the manager said that, over the course of a few days, his team became aware of unauthorized overrides on reservations in the Disney World app, meant for employees’ use only. The app is used to get to the front of an attraction line without having to stand in line and wait. When the Orange County deputy arrived to the office to speak with the man, he said he did not know the iPad was stolen. It was confirmed the iPad was Disney’s property, taken without permission, but had not been reported as stolen. The man was issued a trespass warning by Disney for all of its property.(https://bit.ly/3Cg1zAp)