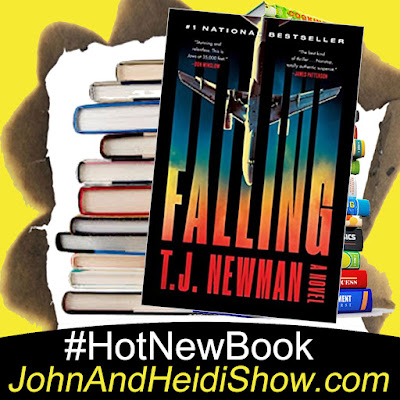 Today we visit with TJ Newman. #1 NATIONAL BESTSELLER * INSTANT NEW YORK TIMES BESTSELLER. You just boarded a flight to New York. There are one hundred and forty-three other passengers onboard. What you don’t know is that thirty minutes before the flight your pilot’s family was kidnapped. For his family to live, everyone on your plane must die. The only way the family will survive is if the pilot follows his orders and crashes the plane. Enjoy the flight.

Some stats from a survey.

• People who say they won’t have a good night’s sleep if they don’t brush before bed: 63%

When a “very large bag of marijuana” tumbles out of your shirt after the handcuffs have been applied, do not be surprised when the cops ignore your disavowal of ownership of said weed. Police responding to calls about a disturbance at an Iowa apartment building discovered 19-year-old Kyle Clark and another man “face to face yelling at each other.” Upon spotting the Iowa City Police Department officers, Clark tried to walk away from cops, who noticed he “had a very large bulge under his shirt near the waist line like he was trying to hide something.” When a cop asked if the protuberance was “a bag of weed,” Clark reportedly “tried to walk down the stairs which was a dead end.” After Clark was handcuffed around 3:00 a.m., “a very large bag of marijuana fell from under his shirt. He claimed it wasn’t his,” reported Officer Tyler Lakose. The complaint does not indicate whether Clark explained why he had someone else’s stash--which weighed about four ounces--nestled against his belly. Clark was charged with felony and misdemeanor drug counts and booked into the Johnson County jail. (https://bit.ly/3khRoE7)


Britney Spears has gotten her dogs back after a housekeeper took them away out of fear for their health.https://www.dailymail.co.uk/

A new report claims Monica Lewinsky hired a therapist to sit next to her while she watched a TV show about her affair with Bill Clinton. (https://bit.ly/3mylKF1)

Due to a rare blood condition a New York Jets pass rusher has been ordered to avoid physical contact for six months. (https://bit.ly/2Wsh3l4)

SCOOP OF THE DAY: BetterCreditCards.com

The lone resident of a Nebraska town was surprised when the 2020 census showed that the town’s population had doubled in size despite no new residents moving in. The claim that Monowi’s population had exploded to two puzzled the town’s lone resident Elsie Eiler, who is reportedly also the mayor, and runs a tavern where she issues her own liquor license. (https://bit.ly/38f6pAT)

A black bear was caught on video in Connecticut stealing a family's Amazon package from their porch. (https://fxn.ws/3DlYQGX)

German track and field star Alica Schmidt, who has been dubbed “the world’s sexiest athlete,” is “taking a break” from the sport after her trip to the Tokyo Olympics didn’t go as planned. Schmidt traveled to Tokyo but never got a chance to compete, as the German team was disqualified for making contact with the Jamaican team in the mixed 4x400m relay. (https://fxn.ws/3DeCY0h)

Data show that the worst U.S. drivers are in Florida.

Russian Dissident Alexei Navalny says the Russian Government is torturing him by forcing him to watch 8-hours of Russian State TV per day. (https://bit.ly/3sPrpHT)

Over in central Glasgow, a landlord is trying to let what’s being billed as an office set up, though it appears to just be their bathroom with a desk and kettle added in. This ‘office space’ can be anyone’s for £50 pounds a week. Summing up the listing, someone wrote on Twitter: “Someone in Partick is renting their sh***er out as an office.” The “property” has a toilet, a window above it, a mini fridge, kettle, books, a desk, lamps, a chair and instant coffee. Never have a make-shift kitchen and loo been in such close proximity. The listing, which also boasts of fiber broadband, made it online 43 days ago, seemingly with little interest unless to mock it. The landlord wrote on Gumtree: “Small and compact space ideal for solo working.” The listing also states, “Located on the 1st floor of a tenement building in Partick, the space has its own private entrance. Included is fiber broadband connection, 2 x desks, mini fridge, toilet and sink, underfloor heating, lamps, mains supply, and kettle.” One person commented on Twitter: “Zoom calls on the throne.” Another said: “Okay, where is the shower? What about wet paperwork?” (https://bit.ly/2Wj2CA7)

The California Chevrolet dealer whose technician was caught street racing a Dodge Charger in a customer's C8 Corvette has made good by allowing the owner to trade in his car on a replacement at the dealer's expense – taxes and all. Earlier this summer, the customer brought his 2021 Corvette in to Fremont Chevrolet to diagnose an engine tick, which turned out to be nothing more than a loose spark plug. When the customer got the car back, he discovered that the car's Performance Data Recorder (PDR) valet mode had recorded one of the dealer's techs taking the car for a spin after completing the work. The Drive, which also reported the initial incident, caught up with the owner and dealer this week, both of whom expressed satisfaction at the outcome. The customer will be taking home a 2022 Corvette leaving only his 2021 model in trade. A shakedown drive to validate a fix is not unusual, and we'd even expect techs to explore an engine's rev range if the powertrain is at the center of the issue. But an impromptu, 148-mph street race is not what we – or the C8 owner, for that matter – had in mind. (https://bit.ly/3Bd6wcR)