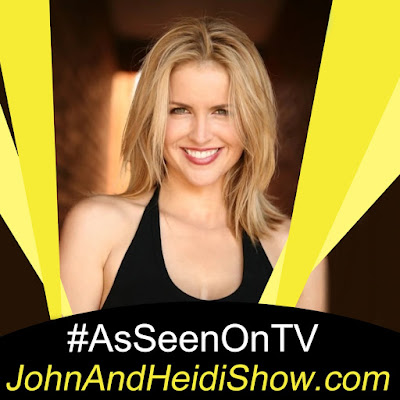 Today we visit with Laurie Fortier. She has a recurring character Agatha in the highly anticipated final season 11 of AMC’s The Walking Dead! Laurie acts alongside Lauren Cohan, Jeffrey Dean Morgan and Norman Reedus, where she dominates as Agatha, the leader of a new group within the series. The Walking Dead season 11 is on now on AMC.

Laurie has taken the screen by storm for over 20 years in film and TV and has dived into many diverse, prime time roles. For instance, Laurie has been cast as mothers, male (yes male) con artists, maniacs, the girl next-door, high-powered attorneys, cops, victims, perps, athletes, and devilish villains. From "kindhearted heroines" to the "evil monster", Laurie Fortier has been blessed with the gift of true versatility.

A survey of 2,000 Americans asked whether seasonal foods, beverages, or activities should only be a treat people enjoy during their matching seasons or year-round. The survey was pretty split, as 48% of people believe you can enjoy seasonal favorites year-round. (https://bit.ly/38pYP6P)

A new study says retiring early can be bad for your brain. (https://bit.ly/3BxF61v)

Four men charged with breaking into an upmarket Darwin restaurant to steal alcohol amid a COVID-19 lockdown will also be slapped with thousands of dollars in fines for not wearing face masks. Northern Territory police were alerted at 1:20am Tuesday that a liquor store had been broken into and four men had fled the scene on foot after allegedly stealing the drinks. Officers arrested the group a short time later. Detectives reviewed CCTV and found the men had breached the NT's Emergency Declaration, which mandates mask-wearing. 'I've confirmed those individuals were not wearing masks and they will be receiving the $5000 fines as part of the charges,' Police Commissioner Jamie Chalker said. 'That's over $20,000 for those four people who've broken into a business that is already being impacted by the lockdown.' Police charged the men - aged 31, 33, 44 and 58 - with contravening an emergency declaration, unlawful entry and stealing. (https://bit.ly/3xZIujk)

A year after a judge granted Carole Baskin control of Joe Exotic’s one-time zoo, she’s finally sold it. Baskin and husband Howard sold the property — the former The Greater Wynnewood Exotic Animal Park — for $140,000. There is, however, a key stipulation. The new owners are prohibited from using the property “to house exotic animals of any kind — or as a zoo, wildlife park or menagerie.” In addition, Howard Baskin said the new owners are also barred from “ever being associated with he who shall not be named,” referring to Exotic. Last summer, a judge granted Carole ownership of the land in order to satisfy the $1-million judgement against Exotic in their trademark lawsuit.

The trailer for “Spider-Man: No Way Home” broke the record for the most views in 24 hours after it was released online, a record previously held by the biggest box office hit of all-time, “Avengers: Endgame.” The new Spidey trailer racked up 355 million views in 24 hours, about 65 million more than “Endgame” did prior to that movie’s release in 2019. This comes after the trailer for “No Way Home” was initially leaked online over the weekend, spurring immediate online buzz and speculation that continued through the week. Sony plans to release the third film in the current Spider-Man series on Dec. 17.

A cafe in Edinburgh, Scotland where J.K. Rowling wrote some of the Harry Potter books has been damaged in a fire. The Elephant House sustained smoke and water damage after a blaze broke out next door on Tuesday. The Elephant House is a regular stop for Harry Potter fans and it proudly displays a sign declaring itself the “birthplace” of the fictional young wizard. Rowling has disputed that, saying she began writing the magical stories before she moved to the city, but she confirmed she frequented the cafe while penning some of the 7-book series.

Michael Jackson reportedly left behind unreleased music that could be featured on a new album. (https://bit.ly/2V0KhHE)

The TSA posted a video of a block of raw chicken parts circulating on an airport luggage carousel. (https://n.pr/3zwWWRu)

A social media influencer was attempting to post a video of herself doing yoga on a beach in the Bahamas when she was bitten by a lizard. The woman says she washed the wound off in the ocean and her doctor told her she's fine. (https://bit.ly/3t2stsc)

Facing a shortage of delivery drivers, Amazon is now emphasizing that it doesn’t screen job applicants for marijuana use. (https://yhoo.it/3jvDMG5)

Only one out of every three people has 20/20 vision.

Wytheville man faces arson and other charges for allegedly starting a fire in a store where his credit card was declined. About 3:30 a.m. Tuesday, Wytheville Police were called to a Sheetz Convenience Store. They were told a customer had just had his card declined, left the store and returned with a gas can, the contents of which he poured on the floor and set afire. He then drove off as the store manager put out the fire. Wytheville Police, the Wythe County Sheriff’s Office and Virginia State Police began searching for the man. The car in which he drove off was found at an apartment complex. Shortly after, a Wythe County Sheriff’s deputy saw the male subject under a tractor trailer near a Lowes store. Police say the man had a hammer and there was a brief standoff before police used a Taser and he was arrested. 40-year-old Kyle Mabe is charged with Felony Arson, Felony Burglary, Felony destruction of property, Misdemeanor destruction of property and Misdemeanor larceny. He was taken to the New River Valley Regional Jail and is being held without bond. More charges are possible, according to police. (https://bit.ly/2Y7tWlu)

A creeping suspect was arrested after being literally caught with his pants down. Deputies in Volusia County captured the arrest of 37-year-old Javier Orozco Gutierrez on body cameras Saturday evening. According to authorities, deputies had been monitoring the area all week after receiving reports of a man exposing himself to a woman. While surveilling the home, deputies said they caught Gutierrez in the act, with his pants down outside the victim’s home. After a short chase, he was taken into custody. Police said Gutierrez told deputies he was out to get some exercise. He is facing multiple charges, including exposure, voyeurism, stalking and loitering or prowling, and remains in jail on a $33,000 bond. (https://bit.ly/3z72Mc6)

Garbage Truck Worker Saves Child From Getting Run Over By A Car
https://www.sunnyskyz.com/good-news/