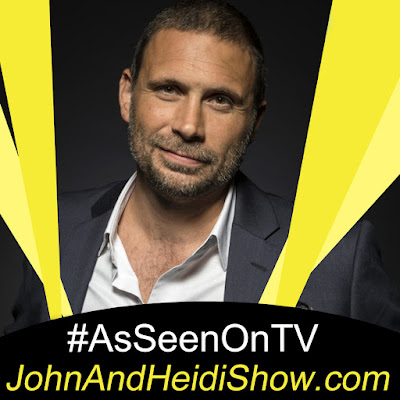 Today we visit with Jeremy Sisto. You can watch him on the TV show “FBI” from Dick Wolf, it's a big hit for CBS. The show is shot in NYC. The fourth season just premiered Tuesday, Sept. 21. You can watch new episodes each week on the CBS Television Network and available to stream live and on demand on the CBS app and Paramount+.

We will also visit about his new film LAST NIGHT IN ROZZIE which explores the effects of past traumas and the importance of facing your demons and connecting with family. The film was released in theaters and VOD on September 17th.

According to a new survey, digital hoarding is very much a real thing, as 3 in 5 people admit that they hardly ever delete photos from their smartphones. 56% of people also admitted that they’ve been storing “a lot more photos” on their devices since the beginning of the pandemic in March 2020. (https://bit.ly/39uMij0)

A drunken man caused $27,000 worth of damage performing an obscene act on top of a statue. 45-year-old Stewart Tomlinson was ordered to pay $6,000 in compensation for snapping the head off The Footie Imp, a statue sponsored for charity by Lincoln City Football Club. The court was shown closed-circuit television footage from Lincoln center of the jobless father-of-two twice wrapping his legs around the head of the Imp and simulating a sex act as his drunken companions watched. The fiber-glass statue, dressed in Lincoln City's strip, was beheaded on the second occasion. Tomlinson and his friends then kicked the broken pieces around before leaving to continue an all-day drinking binge. The court heard that Tomlinson, from Grimsby, North Lincolnshire, said he had received 'death threats' over the incident. https://www.dailymail.co.uk

Comedian Jon Stewart will be hosting a News Show on Apple TV that will combine reporting on world events with comedic absurdity. (https://bit.ly/3ztqj6u)

In a new interview, actor Daniel Craig says that the character of James Bond should not be changed to a woman. (https://bit.ly/3zuF2hA)

Facebook is creating augmented reality glasses, which could transport you to a virtual world, send message notifications to your eyes, and place walking directions in front of your face. (https://bit.ly/3lBVlEu)

A group of Scientists are trying to potty-train cows. (https://bit.ly/3EJDsfC)

Space X's Civilian Crew made a water landing off the Florida Coast on Saturday. The first ever, all civilian crew spent three days orbiting the Earth. (https://bit.ly/3ExYptB)

A new book claims that jogging while stoned on marijuana will give runners a boost. (https://on.wsj.com/3k5Sjc4)

A mass of pizza dough discarded by a Louisiana (Covington) Domino's Pizza employee has grown to enormous proportions. What started as a blob fully contained by the dumpster rose and overtopped its metal box thanks to temperatures that hovered in the 90s. The pizza dough was tossed in preparation for Hurricane Ida.

Genetically, you are more like your dad than your mom.

A Winter Haven man is facing a host of charges. 27-year-old Sir Dangerous Lashawd London grabbed the woman’s car keys and refused to give them back to her. She then got into a different car and as she started to leave Sir Dangerous jumped into the passenger side and started punching the front passenger window, windshield and radio display causing each to be cracked. The woman attempted to drive towards the front entrance of the complex and stopped at the front entrance’s stop sign. According to police, Sir Dangerous threatened the woman telling her he was “going to make your life miserable,” and demanded that she drive home or he would beat her up. Fearing for her safety, the woman turned around and drove back through the complex. After the woman drove through the parking lot, Sir Dangerous jumped out of the car and ran to the woman’s second vehicle that he had grabbed the keys to earlier and got in the vehicle. Police say he then followed her and attempted to hit her vehicle as she turned onto First Street as she attempted to avoid him down various side streets. The woman then went to the Winter Haven Police Department a short distance away to report what had happened. Winter Haven later found and took Sir Dangerous into custody. He faces multiple charges including armed kidnapping, burglary of occupied conveyance, aggravated battery using a deadly weapon, commit aggravated battery, aggravated assault with a deadly weapon, grand theft of a motor vehicle and robbery. (https://bit.ly/3CsY61A)

The FBI has arrested a man for allegedly planting bombs outside cellphone stores in Northern Michigan. FBI Detroit Division Special Agent Timothy Waters announced that the arrest was made in connection to two incidents in which the man allegedly placed explosive devices outside of a Verizon store in Cheboygan and an AT&T store in Sault Ste. Marie on September 16th. Each of the devices was found inside of a US Postal Service box and sealed in black duct tape. The bombs had the letters “CMT” written on them and contained written threats to the comms companies, the FBI told the Associated Press earlier this week. Both bombs were diffused and nobody was injured. The letters are similar to ones found last month from a group calling themselves the “Coalition for Moral Telecommunications,” which also made demands from telecommunications companies, according to the FBI. Waters said no more identifying information on the suspect can be released until he appears before a judge.(https://bit.ly/3EKyr6e)


GOLF COURSE OR REHAB: Brought to you by TimeForRehab.com
I read the name of a REAL business located somewhere in the world...
Heidi has to guess if it's a Golf Course or a Rehab Center.

Mom Tears Up When Little Boy Walks Up To Her Table In Restaurant
https://www.sunnyskyz.com/good-news