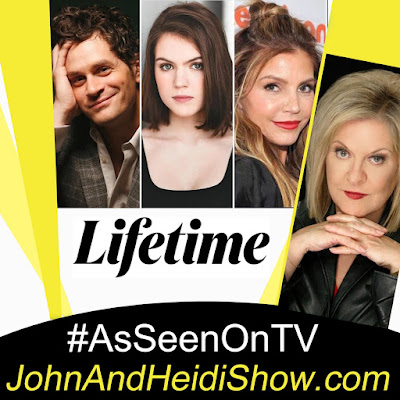 Our guest today is Nancy Grace. We will visit about many things, but for sure about the upcoming movie based on a true story, The Good Father: The Martin MacNeill Story starring Tom Everett Scott and Charisma Carpenter and executive produced by Nancy Grace. Movie premiering on Lifetime on Saturday October 2nd.

The movie is about Utah doctor, Martin MacNeill who made national headlines when it came out that he falsified his transcripts to get his M.D. and then murdered his wife, Michele, with prescription medication!


According to a new survey of 2,000 Americans, 43% of Americans say they’re working their “dream job” from childhood. The results delved into these dream careers and revealed that doctor or nurse (33%), lawyer (24%), and actor (23%) were the top things Americans wanted to be when they grew up.(https://bit.ly/3nQvBqk)

A new study says Maryland is the 7th best state in the nation for teachers. https://bit.ly/2Xy5RUH

Portales police are still investigating how a substance that could be meth reportedly came out of a motel faucet and ice maker. Officers were called Thursday after a crystal-like substance was found in a sink at a Super 8 Motel. It was tested and provided a presumptive positive indication for meth. Police say a similar substance came out of a faucet and struck a guest in the eye. On Friday, more of the substance was found in multiple locations within the building, including the inside of an ice machine. That led to concerns about the substance being within the building’s water system. The water was turned off to the building. The hotel is cooperating with the city. (https://bit.ly/39ott0B)

Emmy-winning sitcom queen Debra Messing slammed a recent announcement that Kim Kardashian is one of several hosts booked for the upcoming Season 47 of NBC’s “Saturday Night Live.” Deb tweeted, “Why Kim Kardashian? I mean, I know she is a cultural icon, but SNL has hosts, generally, who are performers who are there to promote a film, TV show, or album launch. Am I missing something?” (https://bit.ly/3AEIeZa)

The “Family Guy” cartoon characters are starring in a new Pro-Vaccine PSA. (https://bit.ly/3o2gA4U)

A couple in England have finally thrown in the parenting towel — after taking in 620 foster children in 56 years. Pauline, 81, and Roger Fitter, 86, fostered kids of all ages, including newborns, teenagers and everyone in between, from as far away as Belarus and Lithuania, along with raising five kids of their own in a four-bedroom home, until this year when they "retired." Pauline says she kept photos and birthday records of all their foster kids, remembering every name, and considered every foster child as important as her own. The couple married in 1965 and fostered their first child, a baby boy, later that year. The most children they have ever looked after at one time was 11, which included their own. They put up tents to squeeze them all in.

A study found 433,000 people die each year from sitting too long.

A Maine landlord had to call an animal rescuer after a tenant moved out. The tenant left behind 15 tarantulas and one python. All the recovered animals are illegal in Maine and will be relocated.

Studies show 90% of women walking into a department store immediately turn to the right.

A company in the UK is selling a $125,000 toy car for kids, that’s a mini-version of the Aston Martin from the James Bond Movies. The new mini Aston martin will have an engine that produces 20 horsepower. (https://bit.ly/3nW5FKa)

A Wheatfield motorist is recovering in the hospital following a crash that left a car wedged under a large truck. According to Indiana State Police, 36-year-old Jaime L. Wheeler was driving in the far-left lane of the highway when Wheeler lost control of a 2010 Ford Focus on the wet pavement and crashed into the semi-trailer. Police said about half of Wheeler's car ended up wedged under the trailer. Both vehicles ultimately came to a stop in the right lane of the highway. Wheeler was transported to Franciscan Health Hospital in Crown Point for treatment of serious, but not life-threatening, injuries. Police said that the semi driver was not injured. According to police, alcohol or drugs are not believed to be factors in the crash. But driving too fast for the wet road conditions and the condition of the Ford's tires were contributing factors. Police closed two of the three lanes of I-65 for about three hours following the crash for clean-up and investigation. Southbound motorists were backed up beyond Ridge Road until after the highway fully reopened around 4:30 p.m. (https://bit.ly/3u9OhTd)

Police say that a Florida man tried to trade in a vehicle from the same dealership he stole it from. Lake City police responded to a report of a stolen vehicle at a Chrysler Dodge Jeep dealership on Monday. Employees told officers that a man was trying to trade in his vehicle for a new one. But upon checking the VIN number, they found that the vehicle was stolen from the dealership’s lot a few days earlier. The man admitted to stealing the vehicle, police said, adding the crime was captured on the dealership’s camera system. He was arrested on charges including grand theft of a motor vehicle and criminal mischief. (https://bit.ly/3ofKmDF)

The Pines in Cape May, New Jersey ….. GOLF COURSE

Jeff Bezos Pledges $1 Billion To Conserve Land And Sea In Critical Areas Of The World
https://www.sunnyskyz.com/good-news/