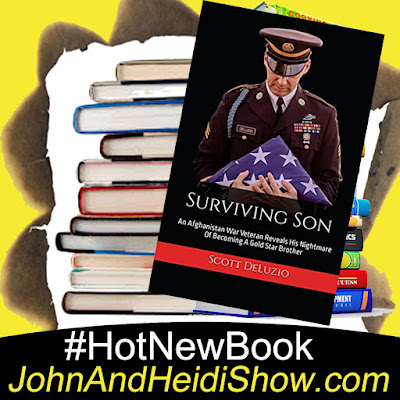 Today we visit with Scott Deluzio, author of SURVIVING SON: An Afghanistan War Veteran Reveals His Nightmare of Becoming a Gold Star Brother

A recent survey of 2,000 Americans found that nearly three in five describe their home décor style as “minimalist,” compared to only three in ten who use the term “maximalist.” 53% of people say they have artwork of nature and landscapes in their home, more than that of people (45%). (https://bit.ly/3kNeVhN)

A group of bible archaeologists claim to have found Mount Sinai where God gave Moses the Ten Commandments. (https://bit.ly/3AaTvPP)

Hours after getting out of jail, a man reportedly stole a car in Hueytown. Days later, he broke into a concession stand at the Pleasant Grove Athletic Complex and was found asleep in a pile of snacks and meth. On September 17th, Matthew Williamson was released from the Jefferson County Jail after being arrested and charged with breaking into a car and stealing property earlier that day. The Pleasant Grove Department of Public Safety reports that less than two hours after his release, Williamson went to Hueytown and stole a car. On Wednesday, Pleasant Grove police received a report of someone breaking into the concession stand at the Pleasant Grove Athletic Complex, where many snacks were taken. The next morning, Williamson was found asleep in the complex’s press box, surrounded by piles of chicken fingers, chips, candy, and methamphetamine. 37-year-old Williamson reportedly admitted to stealing the car and burglarizing the concession. On Friday, he was taken back to the Jefferson County Jail. (https://bit.ly/3m4YWLb)

It's rumored that Channing Tatum and Cardi B will star in a remake of the movie "The Bodyguard." (https://bit.ly/39EsCco)

The Casting of Chris Pratt as Mario in a new “Super Mario Brothers” movie has angered Nintendo fans and drawn accusations of Italia-phobia. https://bit.ly/3zPxAxI

The FBI is reportedly looking into the damning allegations that Britney Spears’ dad, Jamie, secretly recorded her — even in her bedroom and with her lawyers. (https://pge.sx/3zPC6MH)

Over $2 million dollars have been raised for the Marine Lieutenant who was thrown in the brig for criticizing the Afghan Troop Withdrawal. https://bit.ly/3ipmIRa

An Oklahoma Highway Patrol Officer had his feathers ruffled after a scary accident last week when a vulture smashed into his patrol car windshield while he was driving on a highway. (https://bit.ly/2Wudzz6)

Student enrollment at the State University of New York’s sixty-four colleges took another dip amid the lingering coronavirus pandemic. The number of students dropped by 18,600 this fall at SUNY institutions compared to last fall — or 4.7%. (https://bit.ly/3a3541f)

A Florida woman was arrested for assaulting her boyfriend because he wanted to cuddle with her. (https://bit.ly/3EYJ8SS)

Police are warning parents to be on the lookout for Cannabis infused candy during Halloween. (https://6abc.cm/3unxiwQ)

An artist in Spain has installed a sculpture of a woman’s face into the center of a river, so that it looks like she’s drowning. (dailymail.co.uk/news)

A Danish artist has pocketed $84,000 in cash that he received from a museum to incorporate into an artwork and changed the name of the installation to “Take the Money And Run.” Jens Haaning had agreed with Kunsten museum, in northern Denmark, that he would borrow the money to replicate earlier work which displayed the annual incomes of an Austrian and a Dane. But when the museum in Aalborg opened the box that Haaning had shipped, the cash was missing from the two glass frames and the artwork’s title had been changed. “The work of art is that I took their money,” Haaning told broadcaster DR. Kunsten wants Haaning to return the cash, but he’s declining. The museum is now considering whether to report Haaning to the police if he hasn’t returned the cash by the time the exhibition ends in January. (https://bloom.bg/3CUsWAl)

A man who refused to wear a mask and was asked to leave during a performance at Arizona State University’s Gammage Auditorium has been arrested after he allegedly assaulted two staff members. Police said the man was asked to leave the venue during a performance of “Hamilton.” Witnesses said those who were attending Saturday’s show began cheering when the man was removed. Campus police said the man was being held on suspicion of assault, trespassing, and disorderly conduct. Police said there were no reported injuries. (https://bit.ly/3o6Y7V0)

Strangers Help Man Accused Of Stealing Diapers So He Doesn't Get Arrested
https://www.sunnyskyz.com/good-news