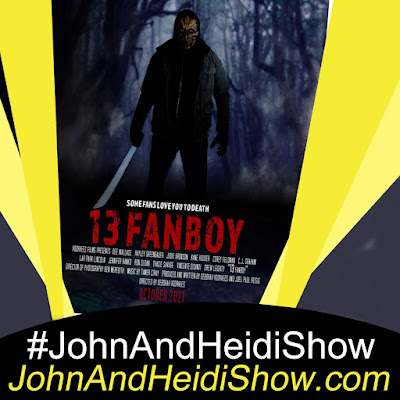 Today we visit with Scream Queen Lar Park Lincoln (Friday The 13th , Knots Landing, Freddy's Nightmares & More) She has two new films out for 2021. Friday the 13th Part V!! The New Blood comes out November 19th and another fun project called 13 Fanboy is out now! https://www.13fanboy.com/

A recent survey found the typical woman will diet twice a year for about seven weeks each time. She’ll typically lose between 9 and 11 pounds each time, but most likely will gain it back.

That’s “high” praise indeed. A South Carolina elementary school teacher is out of a job after a student pulled out two packs of marijuana edibles from the in-class “reward” box, deputies and district officials said. Victoria Farish Weiss, a 27-year-old teacher at Rocky Creek Elementary School in Lexington, surrendered to deputies early Friday after a warrant charged her with possession of a schedule 1 drug in the shocking September 23rd incident. Sheriff Jay Koon said deputies learned a student in Weiss’ class grabbed a pack of “Stoney Patch Kids” marijuana edibles from a box of candy she used to “reward” students in her class. “Detectives confirmed during interviews that Weiss took the pack of edibles from the student and told him to pick something else from the box,” Koon said in a statement Friday. “The student went back to the box and happened to grab another pack of edibles.” No students ate the THC-infused candy. But investigators found packs of pot edibles similar to those selected by the unwitting male pupil during a search of Weiss’ home a day later. Weiss was later “hysterical” when she was questioned about the incident by an assistant principal. Weiss, who was put on administrative leave after deputies notified the school, was fired Wednesday. (https://bit.ly/3vmOlzM)

An online casino is paying people $7,000 to watch every episode of the Simpsons. (https://bit.ly/2Z5sVLT)

A-Listers Joe Jonas and wife, Sophie Turner, have sold their Encino, California estate, which they turned into one of Southern California’s most glamorous contemporary homes. The couple purchased the home in 2019 for $14.1 million and listed it at $16.75 million in June. It recently sold for $15.2 million. The couple already has a new home in Miami’s Bay Point neighborhood, recently purchasing a waterfront home with three bedrooms and 10,416 square feet for $11 million. For more celebrity home news and home video tours, visit www.TopTenRealEstateDeals.com.

Half of adults are baffled by their car’s engine and have no idea where to put the wiper fluid, how to pop the hood — or even what size engine is under it. Three in ten don’t know how to add air to their cars’ tires.

A man who made it his mission to eat Chipotle in all fifty states in just fifty days told reporters that he never got tired of eating it. (https://bit.ly/3jksLXK)

According to data from a Singles in America survey, the biggest turn-offs in a romantic encounter are a lot more simple than one would think. For men and women, the biggest top three turn-offs were rather simple:

You check your phone way too much.

You try too hard to impress them.

What’s the most uncivilized thing we do in public? If you guessed “wear pajama pants” you’re right. According to a survey, all you people who leave the house in pajama pants need to knock it off.

One glass of milk can make a person blow .02 on a Breathalyzer test.

North Korea held a martial arts military parade in which soldiers broke cinder blocks over their heads and laid down on broken glass. (https://nyti.ms/3AIpIyc)

Several families are claiming that roosters are being poached from their Fort Lauderdale neighborhood. One of those residents even confronted an apparent thief. Those residents also say they know why their roosters are being taken. Lin Morgan loves her neighborhood roosters. She loves them so much, she has names for them. It’s why she and some of her neighbors got worried when some started to suddenly vanish. “The first one he took I called Arnie,” Morgan said. “Quite sure he’s dead by now or has been in a fight by now.” One neighbor recently recorded cell phone video of a man they believe is the culprit. “They always have a bait rooster with them,” Morgan said. “They let them fight for a little bit until they tire out, then they take them away.” Morgan said when she confronted a man trying to grab one of the birds a few days ago, she was threatened. “‘We’ll be back to get your roosters and I don’t care how old you are, we’ll be back to get you as well,’” she repeated. “And they threw water bottles at me.” Residents in the South Middle River neighborhood think they know what the roosters are being snatched for: an alleged cockfighting ring. Anyone with information is urged to contact police or Broward Crime Stoppers at 954-493-TIPS. (https://bit.ly/3j4lpaO)

It was a frightening moment for a customer after he said a waitress at Waffle House pointed a gun at his head after a dispute over food. "She was like she will ‘blow my brains out,’" Candy Franklin said. Candy Franklin said an argument with a waitress over food sizzled out of control early Wednesday morning. "It all happened over cheese eggs. At first, they didn’t bring them to me. Then they brought me normal eggs and I said that I ordered eggs with cheese on it. I tipped her and everything. It was all a normal dispute over food. I never in a million years thought it would come to gun violence," Franklin said. "I was looking down at my food making sure it was right and that’s when I just saw people running. I look up and she had the gun at me. I didn’t think she would shoot then she cocked it back. So, I was like maybe she is about to do something. Now, it’s time for me to turn into Rambo and get out of there," Franklin said. Atlanta police confirm they are investigating the incident.(https://bit.ly/3phoaJs)

There's A Bus Shortage In Ohio, So This Dad Is Taking Kids To School In His Limo
https://www.sunnyskyz.com/good-news/