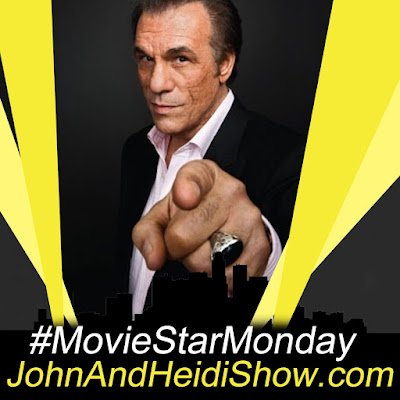 This #MovieStarMonday we visit with Robert Davi (Goonies, Die Hard & Much More) about his new movie “I LOVE US”

When a man born into a crime syndicate falls madly in love with a single mother, the existence he's never questioned collides with his hope to become a loving husband and father. After a life-altering event, it becomes evident that his life of corruption must come to an end, but there's only one way out-a job that will free him from the syndicate and offer his new family the life they deserve.

A new study says only 56% of Americans can name all three branches of government. (https://bit.ly/3zBqFYZ)

Having trouble making a decision? A study (published in the journal Nature Human Behavior) says the easiest way to make a decision is by narrowing down your options to only two choices. In experiments, 140 participants were asked to choose between three different foods throughout multiple rounds with various food choices. During the experiments the researchers found that rather than weigh all three options equally, participants often focused on the two options they saw as the most promising. And narrowing the decision-making process down this way actually led the participants to make faster decisions.

Izaiah Kirby has become famous because of his mugshot! Following his arrest early last week, the 18-year-old South Carolinan was charged Friday with two counts of attempted murder, narcotics possession, and possession of a weapon during a violent crime, according to court records. Kirby is being held in the Spartanburg County jail on $55,000 bond in connection with the four felony counts. The teen resides in Cowpens, a small town outside Spartanburg. In the now famous mugshot... you see his flowing hair in the shirtless photo. https://bit.ly/3hRuGSO

Orlando Bloom posted a video of himself paddle boarding right next to a great white shark. (https://bit.ly/3nEr769)

Kim Kardashian appeared on Ellen DeGeneres’ talk show and said that she thinks her sister Kourtney and Travis Barker’s PDA is, quote, “so cute.” (https://pge.sx/2XnDGs1)

Wild boars carried out a daring mission to free two piglets from a trap. The incident, which occurred in January 2020, was recently written up in the journal Scientific Reports. The breakout was documented by a team of scientists from the Czech University of Life Sciences at a nature reserve. The wild boar trap, which used corn as bait, had been set up to help researchers study prevention measures for African Swine Fever. A camera captured images of two juvenile boars becoming entrapped together for two hours and 30 minutes. A group of around eight wild boars eventually arrived at the site of the trap, led by one fully grown female boar. In an attempt to free the trapped boars, the female boar charged at strategic points where wooden logs were blocking the doors of the trap. Researchers said that it appeared that the other boars were attempting to help the female with the rescue operation. Within six minutes of beginning the rescue attempt, the female boar released the first log blocking the front of the trap. The entire rescue mission lasted about 29 minutes, after which point the trap was released and the boars freed. Researchers suggested that judging by the animals' size and gender, the female boar could have been the juvenile boars' mother. Scientists believe this is the first documented case of wild boar demonstrating rescue behavior, which some consider a "complex form of empathy."

Scientists say the hole in the Earth’s protective ozone layer over the Southern Hemisphere is larger than usual this year and already surpasses the size of Antarctica. (https://bit.ly/3AgShmZ)

Britney Spears posted an unfiltered underwear video that she captioned with the pic, "this is really my a--." (https://pge.sx/3lk1PHI)

A video has gone viral of a cat that was dangling off the upper deck at the University of Miami Football game on Saturday only to fall and get saved by fans who used an American flag to catch it. The whole broadcast stopped to watch the ordeal.(https://yhoo.it/2X9ujLV)

Vodka can be used as shampoo.

Border police at Rome’s main airport on Sunday prevented a tobacco shop owner suspected of running off with a customer’s winning game ticket from boarding a flight to the Canary Islands. The man didn’t have the filched ticket worth $580,000 on him, but he did have a plane ticket for one of the Spain’s Canary Islands. The man allegedly snatched the ticket and dashed off on his motor scooter after the customer had asked the store to verify the win, which is the top prize. The older woman had purchased two scratch-off tickets. She asked a store employee to verify the win. The employee then passed the card to one of the shop’s owners for a final check. But instead he allegedly kept the ticket and raced off on his motor scooter through Naples.

A man has been arrested and jailed after he allegedly assaulted firefighters as they fought a fire at his North Carolina home and had to be subdued with a taser. The Pitt County Sheriff’s Office says firefighters were inside a home in Belvoir on September 9th when a man identified as 40-year-old Desmond Spencer entered and began fighting them. The sheriff’s office said a deputy used a taser to subdue the homeowner after a struggle involving the deputy and a trooper with the N.C. State Highway Patrol. No injuries were reported. Deputies arrested Spencer and charged him with five counts of assault on a government official and two counts of probation violation. He’s jailed on a $35,000 bond and it’s not known if he has an attorney. (https://bit.ly/2XHOeCv)

A customer waiting in line at a Chipotle in Philadelphia on Saturday pulled a gun on a cashier and demanded food after employees told her the store was closing. The incident happened around 5:00 p.m. at a Chipotle restaurant after the manager instructed employees to close the store and tell waiting customers to place their orders online due to a staffing shortage. However, one female patron who was with an unknown male took a gun out of her purse and demanded to speak to the manager when told the store was closing. The cashier immediately pressed the security button to alert the mall security, but the customer threatened "if someone doesn’t make her food she will be back and there will be a problem," police said. The woman put the firearm back in her purse and another employee decided to fill her order in an effort to get her to leave. Police said she gave her order and brandished the firearm again, demanding: "Somebody better give me my food." Once the order was filled, police said the woman took the food and left the restaurant in an unknown direction. Authorities have asked anyone with information about the robbery suspect to contact police.(https://fxn.ws/3kx58fE)

Police Dept. Receives Note From A Man Thanking Them For Their Kindness 71 Years Ago https://www.sunnyskyz.com/good-news/