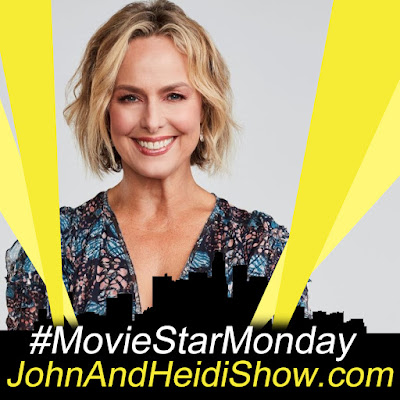 This #MovieStarMonday we visit with Melora Hardin (The Office, 17 Again & Much More)

She is featured on the current season of Dancing With The Stars on ABC TV.
https://abc.com/shows/dancing-with-the-stars/cast/melora-hardin

A new study found that fitness teachers and plumbers are the highest paying jobs that require no experience. (https://bit.ly/3m2XyZA)

Two women are accused of drugging a Miami Beach tourist and robbing him of his $10,000 watch and other valuables after he passed out in a park early Friday. 20-year-old Kimberly Lebron-Martinez 18-year-old Elizabeth Labbe met the tourist from Texas and stayed at a local bar until last call before grabbing alcohol from a gas station and heading to Collins Park. In the beginning of the night, the man reportedly declined to drink. But he eventually consumed alcohol at the park, which knocked him out. The report said that the victim “immediately felt as if he had been drugged and soon after lost consciousness.” The suspects then allegedly snatched the man’s pricey Omega timepiece, a gold chain and debit and credit cards. Over the next 16 hours, the duo also allegedly racked up $15,000 in charges with the man’s bank cards. The women were busted Sunday night and hit with several felony charges.(https://bit.ly/2Y8gBcU)

Michael Gandolfini said in a recent interview that he never saw “The Sopranos” before auditioning for “The Many Saints of Newark.” (https://yhoo.it/3macy89)

Disney's Aladdin on Broadway had to shut down after a cast member tested positive for a breakthrough COVID case. (https://cbsn.ws/3kU5lJS)

Sending an emoji to your friend can be a quick and funny way to stay in touch. Sending an emoji to your doctor probably isn’t something most patients think about when they’re feeling sick. While sending the vomit emoji to your doctor may seem strange, researchers say these symbols can actually help improve communication between patients and medical staff. Researchers (Massachusetts General Hospital) believe these symbols are able to better communicate specific symptoms, medical concerns, and other important information. The doctor says this could be especially true for young children, the disabled, and those with speech problems or language barriers. Researchers say that although there are around 3,500 official emoji there are only about 45 which have a connection to medicine. The first ones appeared in 2015, with a syringe and pill. In 2017, Apple added new emoji to represent people with disabilities. Two years later, a stethoscope, bones, teeth, and microbe emojis popped into computers and smartphones everywhere. Anatomical heart and lung emojis which were introduced in 2020. The researchers are working to create even more medical-related emoji which can more accurately represent patient symptoms and other health care issues.

Does living your best life simply cost too much money? Almost six in 10 Americans agree that being healthy is too expensive. The new survey finds 59 percent see the high cost of health and wellness as a major barrier to living a healthy lifestyle. It’s even more difficult for those who live in cities, with 68 percent of urban-dwellers saying the cost of staying healthy is too high. Mental health tops the list, with 65 percent saying it’s very important — with “living in a safe environment” (also 65%) and “having good relationships with friends and family” (61%) following closely behind. “Eating healthy food,” though, is a priority for just 50 percent of respondents. Only 22 percent of those in the poll know of a nearby grocery store that sells affordable, good-quality fresh produce.

It is estimated that it takes 39,000 gallons of water to produce the average car.

The city of Kabul is facing a blackout because the Taliban didn't pay electric suppliers. (https://on.wsj.com/3FcAosC)

State police are investigating multiple thefts from vehicles Tuesday that involve thousands of dollars’ worth of stolen chainsaws. The incidents reportedly took place between Sept. 24th and Sept. 27th in a fenced-in area when an unknown individual removed 11 chainsaws from 4 different vehicles. The chainsaws were estimated to have a total value of $11,830. Troopers say the equipment was stolen from four different vehicles. Anyone with information regarding these incidents are asked to contact PSP Somerset. (https://bit.ly/3m89bP8)

An irate McDonald’s customer with a sugar rush stabbed a fellow fast-food diner at a Manhattan eatery after a tiff over the amount of sweetener in the assailant’s morning coffee. The 57-year-old victim was eating at the McDonald’s on Eighth Ave. near W. 35th St. when the suspect complained to a security guard that his coffee was too sweet. When the diner came to the defense of the security guard, a brawl erupted between the two customers and spilled out onto the street outside, where the suspect pulled a blade and stabbed the victim in the chest. EMS took the victim to an area hospital where he was treated for a minor injury. The suspected stabber, described as a bearded man with glasses carrying several tote bags, ran off and was still being sought Wednesday. Police released surveillance images of the man in the hope someone recognizes him. Midtown has seen a startling 151% jump in assaults this year, NYPD data shows.(https://bit.ly/2Wbnrxq)

The Reservoir in Hartford, Connecticut ….. REHAB