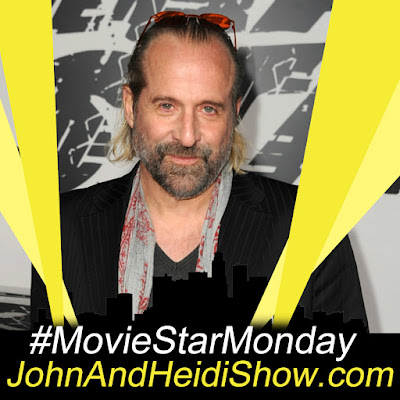 His new film THE GRAND DUKE OF CORSICA, is in theaters now!

A recent OnePoll survey asked 2,000 American parents of children under 10 to weigh in on which “offensive” Halloween costumes they believe should be banned from stores. Actually, Holocaust-related costumes, such as the infamous “Anne Frank” outfit that caused a social media controversy in 2017, topped the list of ideas to avoid. (https://bit.ly/3lxFhVa)

According to one recent study, COVID mutations could be detected faster by testing sewage. (https://bit.ly/3FCGm69)

A Missouri man who accidentally posted a picture of his meth stash on Facebook is now in jail after being turned in by a Facebook user who saw the photo. (https://bit.ly/3BB2ZFP)

Fans say the lead singer of Smash Mouth appeared to be drunk during a recent concert. (https://fxn.ws/3Dwqi44)

The trailer for 2022's “Scream” has finally arrived, and the Ghostface killer is back! (https://bit.ly/3FFHc23)

Kylie Jenner’s bloody photo shoot for her new Kylie Cosmetics “Nightmare on Elm Street” collection was dragged as fans compared the gory pics to an unusually heavy period. Jenner posted two naked photos to Instagram Monday in which she was seen covered in blood while sitting in a pool of even more blood. (https://pge.sx/3Dtna8Y)

The chairman of the Michael Jordan brand has revealed that as a teenager he once shot and killed a man. (https://bit.ly/3oXStow)

Prince Charles says that instead of gas, his car runs entirely on cheese and wine byproducts. (https://bit.ly/3mLgFb8)

Lego on Monday vowed to rid its toys of “gender bias and harmful stereotypes” in a push to make them more accessible to girls. The world’s largest toymaker has already stopped labeling its products as “for girls” or “for boys” and its website does not allow searches by gender. (https://bit.ly/3uYNbKq)

Grey Poupon has released a wine made from mustard seeds. (https://bit.ly/3DwLgQs)

DiGiorno is releasing a new pizza topped with macaroni and cheese. (https://bit.ly/30epDpy)

Studies show that toast lands butter-side-down 62% of the time.

Zookeepers in Australia have released a video showing them feeding a baby giraffe who was rejected by its mother. Unfortunately, at this age, the young calf can only process giraffe milk. (https://gma.abc/3oTWFWe)

A man was arrested after trying to smuggle almost a kilo of gold up his bum. Mohammad Sharif was "moving suspiciously" when cops at Imphal Airport, southern India decided to give him a check-up. What they found was less 007, more The Man with the Golden Bum. After an internal search, Mohammad was allegedly found to have almost a kilo of gold wedged up his backside. India Times reported he was on his way to New Delhi when his subtle ploy was rear-ended at the last moment. Mr. Sharif was told he only became a person of interest to the Central Industrial Security Force because of his "suspicious movement". It was then, during the examination, that his flaky plan was revealed. Officials found Sharif was hiding over 900g of gold in paste form via his rectum as he was passed through Imphal Airport in Kerala, southern India. After careful removal, the gold was weighed in at 909.7g. Its value is thought to be around Rs 42 lakh, or just over $57K. (https://bit.ly/3laZHDv)

A New Hampshire man faces charges for setting off an explosive device. Police say it happened on Riverside Drive in Campton on August 25th. Officers on Thursday arrested 61-year-ol Arley Poling and charged him with possession of an infernal machine and disorderly conduct. Authorities say the explosive device was comparable with an M-Series explosive device. Neighbors told police they felt the blast and heard it throughout their neighborhood, but firefighters didn’t find any damage. Police were assisted by the New Hampshire State Police Bomb Squad. (https://bit.ly/2Yj8ji7)