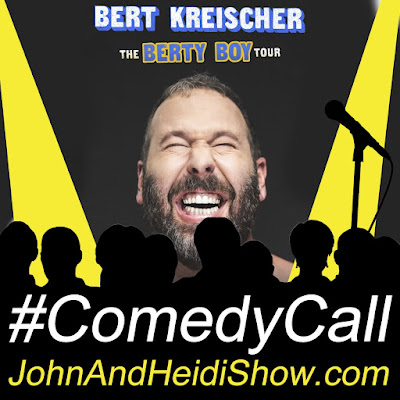 Today we have a #ComedyCall with BERT KREISCHER to promote his "BERTY BOY RELAPSE TOUR" and his upcoming MOVIE that he recently filmed in Serbia. The movie is called “The Machine” https://www.imdb.com/title/tt11040844/

The pandemic has created another reason to hate allergy season -- 7 in 10 people worry that people will confuse their coughs and sneezes with COVID-19 symptoms. (https://bit.ly/3A727Y0)

A new study shows having a higher Body Mass Index gives you a higher risk of cancer. (https://bit.ly/3owGcqN)

An Alabama man was found sleeping in the press box of a sports stadium in a pile of stolen chicken fingers, candy, and meth. (https://bit.ly/3lanhAc)

Mike Tyson says he wants to fight either Jake or Logan Paul. https://bit.ly/3Fg9ZKk

Cassandra Peterson, who portrays the horror movie sex symbol “Elvira, Mistress of the Dark,” revealed that she's had a girlfriend for nineteen years. (https://bit.ly/3ERrtwz)

Tina Turner has sold her music catalog for an estimated $50 Million. (https://cnn.it/3BlcAjP)

The Albuquerque Hot Air Balloon Festival is back after pausing for the pandemic. (https://bit.ly/3FlSHf2)

Meghan Trainor and her husband, Daryl Sabara, have taken intimacy to a whole new level, revealing that they had toilets installed next to each other so they can go to the bathroom at the same time. (https://pge.sx/3a6oxhd)

Adele has announced she's making a comeback with a brand new single. (https://yhoo.it/3a7sTVB)

A North Carolina woman who wore tight shorts on a date says she contracted an infection and almost died as a result of an eight-hour wedgie. (https://bit.ly/3uKI94h)

Scientists say the moon is moving away from the Earth due to changes in the earth's tides. (https://bit.ly/3BdUu3o)

An upstate New York couple whose wedding plans were disrupted by travel restrictions at the US-Canadian border ending up saying “I do” right at the Quebec crossing so all of their guests could attend. (https://bit.ly/3uAP000)

One in 5 British households has a copy of Pink Floyd’s “Dark Side of the Moon” album.

It was almost a real-life slasher flick. A hard-to-frighten 11-year-old boy was accidentally stabbed by an overzealous actor in an Ohio haunted house last week – yet continued his tour of the Halloween attraction anyway. The boy was entering the 7 Floors of Hell haunted house at Cuyahoga County Fairgrounds when the actor, wielding a real Bowie knife, stabbed the boy in the foot in an attempt to scare him. The unidentified actor, 22, reportedly agreed with police that it “was not a good idea” to use a real hunting knife instead of one of the prop knives the haunted house supplies its entertainers for the purpose of fake fright. The boy was treated at the scene for an injury to his toe with his mother by his side, but refused any further treatment. He continued his tour of the haunted home. Police confiscated the knife but filed no charges at the mother’s request. (https://bit.ly/3zIxTua)

A passenger on a commercial plane opened an emergency door and jumped on its wing shortly after the aircraft touched down at Miami International Airport Wednesday. 33-year-old Christian Segura had been on American Airlines flight 920, a four-hour jaunt from Cali, Colombia. The suspect, who is American, jumped off the wing and was taken into custody by responding officers. Segura’s stunt did not cause any delays, and the other passengers disembarked without incident. In 2010, a Jet Blue flight attendant who slid down his plane’s emergency shoot on the tarmac at Kennedy Airport avoided jail time after he copped to mental health problems. (https://bit.ly/3ut3KxG)