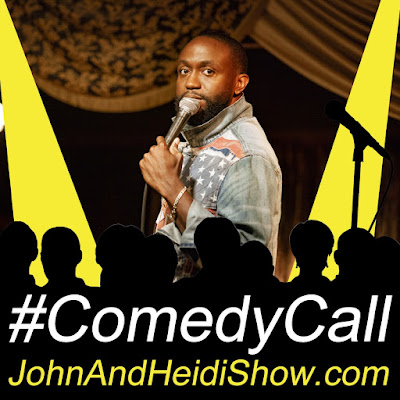 Today we have a #ComedyCall with comedian/actor Byron Bowers. He has previously appeared as a recurring character on Lena Waithe’s hit Showtime series, THE CHI. An avid car enthusiast, Byron also produces and stars in the Donut Media Series MIRACLE WHIPS. Byron can currently be seen in Steven Soderbergh’s ensemble crime thriller NO SUDDEN MOVE for HBO Max as well as Netflix’s CONCRETE COWBOYS

We will talk about The HBO Max Original TEN YEAR OLD TOM, a bitingly-funny ten episode adult animated comedy series that debuted its first season in September on HBO Max.

A new study finds that lack of sleep can affect the way you walk. https://bit.ly/3jHKkkR

According to a recent survey, half of Americans swear they’ve encountered a ghost, which has lead many to believe that their homes are haunted too. Per the survey of 2,000 people ages 21 and over, 63% believe in the paranormal in some form. (https://bit.ly/3jBjZVe)

On Oct. 26, 2021, Humboldt County Sheriff’s deputies were dispatched for the report of a suspicious male passed out inside of an idling vehicle parked along the roadway. Deputies arrived on scene and observed the male, 32-year-old Donavan Nathaniel Baltzley, to be in possession of a firearm on his lap. Deputies conducted a felony traffic stop on the vehicle and detained Baltzley without incident. During a search of the vehicle, deputies located over 12 grams of methamphetamine, approximately 1.8 grams of heroin and three counterfeit $100 bills. Additionally, deputies located a large amount of cash believed to be associated with the sale of controlled substances. The Humboldt County Drug Task Force responded to the scene and seized the cash pursuant to asset forfeiture proceedings. (https://bit.ly/3nCuKYE)

Newly released documents reveal that Alec Baldwin was practicing a “cross draw” in a church pew that required pointing his weapon at the camera during the prop gun mishap that left cinematographer Halyna Hutchins dead. (https://bit.ly/3jzfCu4)

After Alec Baldwin shot and killed a coworker on a movie set with a prop gun, some industry insiders are calling to ban guns from movie sets. https://yhoo.it/3b7TfqK

Alec Baldwin and his wife Hilaria have come under fire for posting a tasteless Halloween photo with their six kids. Baldwin has been relaxing in Vermont with his wife and kids. (https://www.dailymail.co.uk/news/article-10151457/Alec-Hilaria-Baldwin-pose-six-kids-Halloween-photos-amid-shooting-chaos.html)

Busch beer is now selling a wedding dress based on their beer cans that is entirely camouflage. (https://fxn.ws/3mDa3g7)

Meghan Markle's estranged brother says she has the drive to run for President and would do good things in the White House.(https://www.dailymail.co.uk/tvshowbiz/article-10154193/Thomas-Markle-Jr-wouldnt-surprised-sister-Meghan-ran-president.html)

Florida's Teacher Of The Year was arrested on Friday for punching a female student. (https://bit.ly/3mALHUc)

The Titanic crew had no binoculars, which may have helped them see the iceberg. They were inside a locker and the key was lost.

China has locked 34,000 guests inside Disneyland to get covid tests. https://bit.ly/3GMs8QX

It was a potluck wedding. An Indian couple were so eager to tie the knot amid floods that they were captured sailing to their wedding venue inside a giant cooking pot that they had borrowed from a local temple. The waterlogged lovebirds — identified as health workers in the town of Alappuzha in southern India’s Kerala state — waved and smiled in their ceremonial clothes as two men steered their improvised boat, Agence France-Presse reported. “It has turned into a wedding which we never imagined,” the bride told local news outlet Asianet after they got hitched. Water lapped up at the edge of the building as they got married in a Hindu ceremony attended by a small number of guests. At least 27 people have died in Kerala amid floods since Friday and forecasters warned of more heavy rains in the coming days, according to AFP. (https://bit.ly/3jnv8cu)

Try to be a rainbow in someone’s cloud. - Maya Angelou

'It All Worked!' Ship Collects 20,000 Pounds Of Trash From Ocean
https://www.sunnyskyz.com/good-news