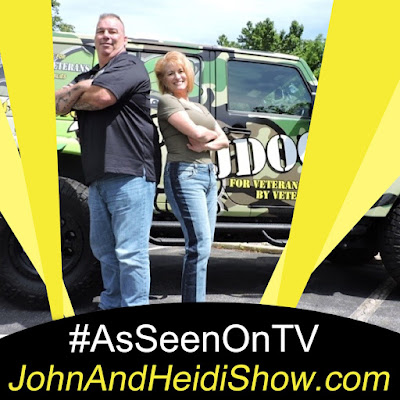 Today we visit with JERRY FLANAGAN, Army veteran and host of new TV series, Operation Hidden Treasures follows enterprising U.S. Military Veterans and their families whose mission is to salvage and repurpose otherwise unused items and turn them in to 'treasures' for people in need. The series premiered on Sunday, Oct. 10, 2021 at 8:00 a.m. Eastern on Discovery Channel.

It's American Pickers meets Pawn Stars but with a higher purpose. jdog.com

A new study claims that isolation improved well being for most people during the pandemic. (https://bit.ly/3mCNxDZ)

Hugh Jackman redefined “scene cutting” after accidentally slicing his nose with a hat while rehearsing for his upcoming role in “The Music Man” on Broadway. (https://bit.ly/3jHlD7N)

An Arizona teacher who's imprisoned for having sex with a 13 year old student has been teaching inmates behind bars. (https://bit.ly/3mDoj8H)

A woman in Florida was arrested for pouring a pan of hot grits on her boyfriend. (https://bit.ly/3q1kVXg)

A Florida woman has been arrested for beating her mother in the head with tacos. (https://bit.ly/315LbVV)

A California man claims he’s paid off his student loans and bought a house by eating nearly every meal at a Six Flags theme park for seven years straight, by using an annual pass that included 2 free meals per day. https://n.pr/3mhZ1MW

Six people were shot and one person was killed in New York City over the Holiday Weekend. (https://bit.ly/3w2kCMK)

Australia's borders have opened up after 590 days of covid shutdown.

A Beverly Hills, Florida, man has been arrested for setting fire to two homes and a statue of Jesus. James Lee Harris, 25, set fire to “a tree and a statue of Jesus Christ” at Our Lady of Grace Catholic Church in Beverly Hills, a home on South Barbour Street and another vacant home on South Wadsworth Avenue. A fire “caused major damage” to the house on South Wadsworth. A fence outside the home on South Barbour Street was set ablaze, and its windows were “covered in a liquid, possibly gasoline,” according to police. Harris also attempted to set fire to propane tanks at the Catholic Church where he lit the Jesus statue and tree on fire. Harris has been charged on four counts, including arson at a church and arson at a dwelling, and he is being held at the Citrus County Detention Facility on a $36,000 bond. Prendergast thanked witnesses “for coming forward so quickly with invaluable information” that helped his department solve the crime. (https://bit.ly/3Gi8EDd)

Police have arrested a woman they say stole a service dog at a Walmart store in Somersworth. Christine Powers, 56, was taken into custody on Friday afternoon. She was charged with theft by unauthorized taking and arrest prior to requisition. Police said that on Wednesday, a Walmart shopper briefly stepped away from her cart in the checkout line to grab a drink. When she turned back, her dog, 9-year-old Emmy Lou, was gone. Investigators said they found Powers with the dog in Dover. The dog appeared to be in good health and was reunited with her owner, police said. "It was obvious they were meant for each other," said Somersworth Capt. Tim Mclin. "It was a pretty powerful reunion. She was very happy." Powers is charged with theft. She also faces charges in Pennsylvania for allegedly violating probation after a theft conviction.(https://bit.ly/311cVuP)