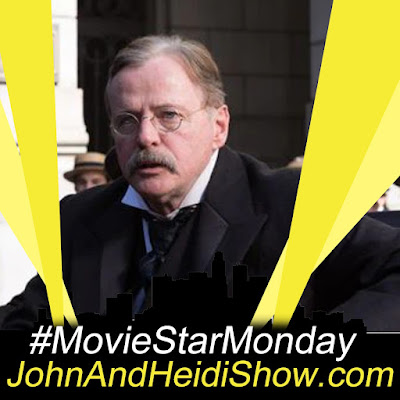 This #MovieStarMonday we visit with Aidan Quinn (Desperately Seeking Susan, Legends Of The Fall & many more) We will visit about his newest project “The American Guest” on HBO Max. Quinn portrays President Teddy Roosevelt. He does an amazing job of bringing Teddy back to life in this spot on depiction!

National Cook For Your Pets Day

Being older than 52 is nothing to laugh about because that’s the age when we start becoming grumpy, according to a survey. The poll found those over 50 laughed far less than their younger counterparts and complained far more. While infants laughed up to 300 times a day, that figure had fallen to an average of six laughs by teenage years and only 2.5 daily chuckles for those over 60. Men were also found to be grumpier than women.

An Allentown man admitted his role in a years-long scheme to import dangerous drugs from China and then sell them as herbal supplements to unknowing customers. Leandro Rodriguez pleaded guilty Monday to conspiracy to defraud the U.S. government by smuggling $669,000 worth of drugs into the country in violation of the U.S. Food, Drug and Cosmetic Act. According to his plea memorandum, Rodriguez put his clients at risk by selling them pills with sibutramine, a substance banned in the U.S. due to the risk of cardiovascular episodes and strokes. It’s the active ingredient in the weight loss drug Meridia, which is no longer sold in the U.S. He also sold drugs with tadalafil, the active ingredient in the erectile dysfunction drug Cialis, according to the plea memorandum. Lilly had the exclusive rights to distribute Cialis during the time covered in the indictment. The drugs were sold as herbal supplements to customers at flea markets and over the internet, court records say. The scheme netted Rodriguez $669,000 between 2011 and 2017, the plea memorandum says. Rodriguez ordered the drugs from China and had them distributed by Eric Trevino of Donna, Texas, and Trevino’s brother-in-law. Rodriguez faces a maximum of five years in prison when he’s sentenced January 28th by U.S. District Judge Edward G. Smith.(https://bit.ly/3E03gmw)

Hugh Grant is selling the bachelor pad he lived in while filming "Love, Actually." (https://bit.ly/2ZhKdoP)

In a letter to congress, Meghan Markle is advocating that parents should get more paid vacation. (https://cbsn.ws/3pty0Ir)

A woman has been arrested and charged with assaulting a man with a knife and fork on Saturday. Omega Hopkins allegedly attacked Anthony Pearson at a residence on Camvic Terrace. Police say she stabbed Pearson with a fork and cut him with a kitchen knife, causing serious injury. No information has been released on his condition, or what may have led up to the attack.(https://bit.ly/3lyP4ul)

Jennifer Gates required all guests who attended her extravagant $2-million-dollar wedding celebration in Westchester, New York to be fully vaccinated and get a negative COVID test before being allowed into the party of the year. The 25-year-old daughter of Bill Gates wore a stunning wedding gown Saturday when she walked down the aisle with her new husband Nayer Nasser at the $16 million North Salem property. (https://bit.ly/3aRkkhT)

Lance Bass posted photos of himself with his newborn twins. https://pge.sx/2YYmB8U

A lucky cat somehow managed to survive 52 days locked in an abandoned house in The Netherlands (Vlaardingen). To survive it ate paper. Near the end of August the new owners of the house were shocked to see a thin, malnourished cat race past them as they opened the front door of their property. They had bought the place at an auction, so this was the first time they set foot in it. An animal shelter was contacted and they managed to catch the feline. It turns out that the former owner had disappeared on July 1 and the cat had been struggling to survive ever since. It’s unclear if the cat’s former owner abandoned the animal, or if he planned to come back for it and something bad happened to him at some point, but animal rescuers found no traces of food left behind for the cat, and even if there was at some point, it had been consumed way before the rescue operation. For water, rescuers think the cat found a leaky tap somewhere.

Only 30% of people can flare their nostrils.

We know the various ways to get around in Florida besides your souped-up sports car. There’s Uber, scooter, even walking. But a lawn mower? This is what a passerby in Lehigh Acres recently saw: A man motoring to 7-Eleven on a lawn mower on State Road 82. The photo was sent to local station NBC 2. Neighbors told the TV station that the man, whose identity was not revealed, does this often for “fun.” Whatever the reason, driving a lawn mower on public roads is illegal. A motor vehicle requires the proper lights, turn signals, registration, and a license plate. Lawn mowers don’t have any of that. Also: Lawn mowers can only go up to 5 mph, not exactly keeping up with the traffic flow on a state road.(http://hrld.us/3BZYViI)

Fukuoka prefectural police have arrested a 51-year-old unemployed man on suspicion of stealing a police patrol car. According to police, the incident occurred on October 14th. The man, Kazunari Amimoto, had been driving his van along the Kyushu Expressway in Miyama, Fukuoka Prefecture, when he ran out of gasoline at around 4:00 a.m. Amimoto got out of his van and began walking. Another motorist called 110 to report that a man was walking along the expressway. An unmarked Kumamoto prefectural patrol car stopped him and officers asked him to wait in the back seat. The two officers left Amimoto alone in the car with the engine running and red light rotating when they got out to keep traffic moving. Amimoto then got into the driver’s seat and drove off. After about 20 kilometers, he was stopped by a police car in Kita Ward, Kumamoto. Nobody was injured in the incident. Amimoto was quoted by police as saying he just wanted to go home. (https://bit.ly/3n6TyYG)

Build your own dreams, or someone else will hire you to build theirs. —Farrah Gray