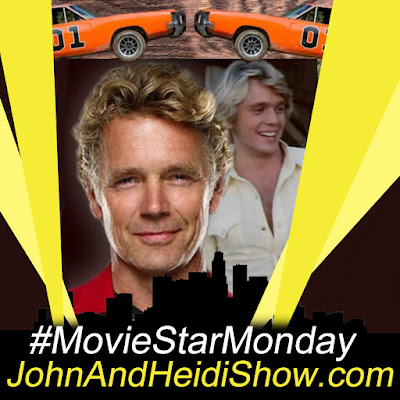 This #MovieStarMonday we visit with John Schneider. We'll talk about his new movie, Poker Run (Maven Entertainment) Available for streaming and on DVD.

Schneider wrote, directed and stars in this highly anticipated sequel to 2020’s Stand On It, a tribute to Smokey and the Bandit. JohnSchneiderStudios.com

John’s extensive acting career includes the iconic roles of "Bo Duke" on The Dukes of Hazzard, “Jonathan Kent” on Smallville and "Jim Cryer" on Tyler Perry's The Haves and the Have Nots. As an independent filmmaker, John continues to write, direct and star in his own films, including Christmas Cars (2019), Stand On It (2020), and the upcoming film Poker Run. He also co-stars with Reba McEntire in Lifetime’s Christmas In Tune this holiday season

Women who drink just two soft drinks a day are more likely to develop heart disease. According to a study of over 4,000 women, those who regularly consume sugary soft drinks are more prone to cardiovascular disease, diabetes and expanding waistlines. Researchers from the University of Oklahoma compared middle-aged and older women who consumed two or more sugary soda drinks or flavored waters a day to those who drank one or less.

According to a recent survey, 3 in 5 shoppers say they skipped Black Friday and opting for Small Business Saturday instead. 7 in 10 Americans say they’d rather avoid a nearby chain store and trek an average of eight miles to support their favorite independent small business during the holidays. (https://bit.ly/3rid1th)

Tailgates are a major part of North American athletic culture, especially at college football games. Michigan’s Attorney General Dana Nessel said in a recent Facebook apology that she had too much fun tailgating at the recent football game between Michigan State University and the University of Michigan. She volunteered an apology on the social media outlet, referring to the incident as “TAILGATE-GATE”: “Before the big game, I attended a tailgate on an empty stomach. Much to my surprise, MSU tailgate’s tend to have more alcohol than food, so I thought it seemed like a good idea to eat 2 Bloody Mary’s, since as long as you put enough vegetables in them, it’s practically a salad. As it turned out, this was not a brilliant idea. Also, I might be a terrible bartender. I proceeded to go to the game (which I’m told Michigan definitely won!) and started to feel ill. I laid low for a while, but my friends recommended that I leave so as to prevent me from vomiting on any of my constituents (polling consistently shows “Roman showers” to be unpopular among most demographics).” Nessel later said she was moved through the parking lot in a wheelchair to avoid falling. She then got into a vehicle with her designated driver who escorted her home, where her wife supplied her with Tylenol and water in anticipation of a “skull-crushing hangover” the next day. Nessel concluded: “I am human. Sometimes I screw up. This was definitely one of those times. My apologies to the entire state of Michigan for this mishap, but especially that Michigan fan sitting behind me. Some things you can’t un-see. … Sorry to all the people who have supported me for letting you down. I will try to do better.”

A video with a remarkably uncanny Steve Martin lookalike playing with his dachshund filmed from someone’s window was trending on Monday. Twitter user Aimee Vanderpool reposted the TikTok video, quipping, “A man who looks like Steve Martin, in a garden, tending to this dachshund is exactly what I need this morning.” After his name trended from the viral video, Steve Martin himself couldn’t help noticing his similarities with the man. The actor-comedian replied to the tweet: “I am relieved to find out this is not me. I was starting to doubt my sanity.” https://twitter.com/SteveMartinToGo/status/1460235591241674752

Wilson the Volleyball from the Tom Hanks Movie “Castaway” has sold at auction for $308,000 Dollars. (https://bit.ly/3Hvw4pk)

A California freeway was covered in cash after an armored truck burst open and spilled thousands of loose bills onto the road. (https://yhoo.it/3nIJg2i)

Jeff Bezos’ Blue Origin announced the crew of its December 9th launch, which will carry “Good Morning America” co-anchor and former New York Giant Michael Strahan as well as five others past the atmosphere. (https://bit.ly/3oSEXRA)

Dutch caretaker Prime Minister Mark Rutte condemned rioters in Rotterdam and other towns and cities across the Netherlands over the weekend as "idiots" and said police and prosecutors would bring them to justice. (https://fxn.ws/3cHjfu2)

A video has gone viral of a cat in the United Kingdom emerging from the tunnel of a model train station. The cat's owner says playing with train sets is one of the cat's lifelong hobbies. (https://www.dailymail.co.uk/news/article-10204027/Fluffy-cat-called-Mittens-squeezes-tunnel-model-train-set-VIDEO.html)

According to a study, it takes the average person 32 seconds to pull out of a parking space. This is from the time they enter their car.

A possum has been released without charge after it held a woman “hostage” at her home. New Zealand police received a call late on Sunday night from a distressed woman who said “a possum was holding her hostage” at her home. When she would exit her house and attempt to reach her car, the possum would charge at her and she would flee inside. When the police arrived and approached the front door, a juvenile possum came out of the dark and climbed an officer’s leg. The officer suspected it was either an escaped pet or had recently been separated from its mother.

The Michigan Department of Licensing and Regulatory Affairs revoked a Garden City woman's day care license after an investigation revealed a child put another child in a clothes dryer and turned it on while under her supervision, and she didn't tell the child's parents. "It was critical to take emergency action to protect the health, welfare, and safety of the children at this family child care home," LARA said in a news release. According to LARA, the woman brought the child, described only as a Minor Household Member 1 (MHM 1), to the hospital on Aug. 4 because she was "stressed out" because MHM 1 had put another child in the clothes dryer and turned it on. MHM 1 later admitted to a nurse and social worker that she did put another child in the dryer and turn it on. Later, the child who was in the dryer told her mother about it and said it was “hot, and it was dark and hurt my back." According to the report, the woman never told the child's parents or LARA about the incident, and then proceeded to lie about it during the investigation process. LARA's investigation found violations under the Child Care Organizations act, and, as of Nov. 3, the woman's license has been revoked. She is no longer allowed to operate a day care and must inform all parents of children in her care about her license suspension.

Violations include, but are not limited to:

Lack of appropriate care and supervision

Household member's suitability and conduciveness to the welfare of children

Failure to provide truthful and accurate information to the department during an investigation (https://bit.ly/3Drbjc6)

A Broward County woman faces charges after authorities detained her for attempting to smuggle 56 guns across the Michigan-Canada border. 48-year-old Vivian Richards was arrested after her car was sent to secondary examination at the Blue Water Bridge port of entry in Point Edward, Ontario. “The Canada Border Services Agency is the first line of defense for our country,” Marco E. L. Mendicino, minister of public safety said. “The smuggling of firearms is a threat to public safety, and this seizure is an example of our steadfast commitment to preventing dangerous criminal activities and keeping Canadians safe.” During the examination, CBSA officers said the seized items were discovered in boxes in the trunk of the car. They found “56 undeclared prohibited firearms, 13 over-capacity magazines, 43 ten-round pistol magazines and 100 rounds of ammunition.” Richards faces multiple charges, including attempt to smuggle, evading compliance, unauthorized possession of a firearm, unauthorized possession of a prohibited weapon or restricted weapon, possession for the purpose of weapons trafficking and possession of a firearm knowing that the serial number on it has been altered, defaced or removed, among others.(https://bit.ly/3qWR16I)

Be happy now. Feel good now. That’s the only thing you have to do. - Unknown