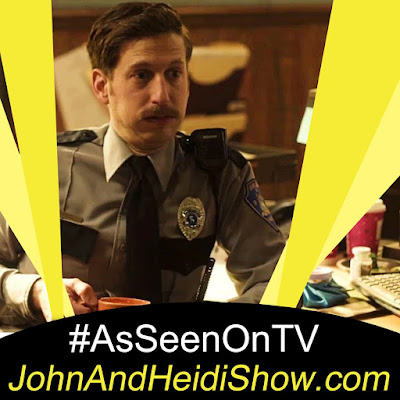 A study found that marijuana users are twice as likely to experience a type of acute heart stress that resembles a heart attack.

Researchers say if you inherited the likelihood of heart disease from your parents, you can effectively override your genes by living a healthy lifestyle.

According to British researchers, 70 percent of women require up to 20 minutes to decide whether or not to order dessert.

A 39-year-old defense attorney in Pittsburgh named Daniel Muessig went viral in 2014 for an ad where he claimed he could "think like a criminal." And this week, he admitted in court that he actually is one. The ad he made was ridiculous. He claimed to know the legal system inside and out . . . called laws "stupid" and "arbitrary" . . . said he can "think like a criminal" and has lots of "street knowledge" . . . and joked that he visits his friends in jail all the time. He won't have to visit anymore though, because he got indicted over the summer for selling hundreds of pounds of marijuana. The guys he was working for were selling drugs a lot more dangerous than marijuana. Back in 2019, cops tapped a drug dealer's phone, and the sting operation revealed Daniel was helping them operate a stash house. Prosecutors say he helped distribute and sell 200 to 900 pounds of marijuana. They also caught him with around $400,000 in drug money. He took a deal and pled guilty on Tuesday. He'll be sentenced in March and faces at least five years in prison. He'll also be a felon, so he can't practice law anymore. (https://bit.ly/3x0pcLN)

Jussie Smollett was back on the red carpet as he attended a screening of his upcoming film “B-Boy Blues” in Harlem. (https://pge.sx/3kYkWb6)

TikToker Shirai Wiggins (@shiraiwiggins) was worried about her neighbor after she noticed they left a delivery of Cold Stone Creamery ice cream outside their door — for a week. Shirai captioned her video with “I’m scared! #neighbor”. The video shows Shirai’s apartment hallway and an untouched ice cream delivery outside her neighbor’s door. A text overlay reads, “I think somethings wrong with my neighbor this ice cream has been here for a week!” In the comment section, Wiggins stated she would call the police. Fortunately, the neighbor appeared to be fine. A follow-up video posted earlier today shows that the delivery is gone.

The San Francisco area saw back-to-back flash mobs ransack a Nordstrom and a Louis Vuitton over a 24-hour period, alarming security experts in a city that has already been struggling with rampant smash-and-grab incidents. Some security experts are pointing to California’s laws that are intended to reduce costs of incarceration as to why there is an increase in such crimes. https://fxn.ws/3qYsgap

A natural stream in Hawaii has tested positive for an alcohol content of 1.2%. (https://bit.ly/2Zasm38)

Violent protests have broken out against COVID-19 vaccine mandates and lockdowns across Europe amid new tough rules to curb winter waves of the virus. In many countries, people will be able to leave their homes only for reasons such as buying groceries, going to the doctor, or exercising. (https://bit.ly/2ZaToaG)

When glass breaks, the cracks move faster than 3,000 miles per hour. To photograph the event, a camera must shoot at a millionth of a second.

A baby girl in India has been released from the hospital after being found in a sewage drain in Mumbai. (https://cnn.it/3nsg2Vi)

Police in a Chicago suburb are looking for a group of thieves who allegedly stole $100,000 from a luxury store in a shopping center on Wednesday afternoon. The alleged criminals casually walked into a Louis Vuitton store at the Oakbrook Center west of Chicago a few people at a time after the armed guard went on a short break. After all fourteen had entered the store they suddenly started grabbing everything they could take with them. The guard returned and tried to stop them but they got away. Oak Brook Police said they have vehicle and license information on the suspects. “We’re nailing down all those leads now, our detectives are out working those leads,” Oak Brook Police Chief James Kruger told reporters. Last month, thieves allegedly stole thousands of dollars in purses from a Bottega Veneta store near Chicago’s Magnificent Mile and last Friday robbers allegedly took around $15,000 in cologne from an ULTA beauty store in Oak Brook, the Chicago Tribune reported. (https://bit.ly/3DEpMBE)

A local Walmart shopper faces the potential loss of her license to carry a firearm, after the gun in her purse ‘misfired’ while she was in the checkout line at a Walmart in Northborough. It happened at the Walmart on Otis Street on Monday night. Police responded after they “received a report of an accidental misfiring of a weapon.” No one inside the store was hurt and police say “the projectile was recovered from the floor.” The gun owner, a 31-year-old woman from Worcester told police she mistakenly fired her 9mm handgun, while digging through her purse at the cashier. Investigators say “the licensing authority was notified for purposes of review and possible revocation” and the appropriate state agency was notified since the woman’s toddler was with her. The woman will be charged with discharging a firearm within 500 feet of an occupied building.(https://bit.ly/3noWUHJ)

Conditions are never perfect. ‘Someday’ is a disease that will take your dreams to the grave with you…. If it’s important to you and you want to do it ‘eventually,’ just do it and correct course along the way. - Tim Ferriss

She Calls Her Shop Janie's Life-Changing Goods. And She Means That Literally
https://www.sunnyskyz.com/good-news