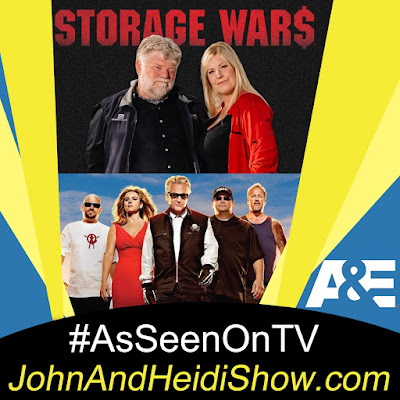 Today we visit with DAN & LAURA DOTSON of STORAGE WARS, returns for a new season November 2nd at 9PM et and pt on A&E

"Storage Wars" returns to bidding, buying and selling for an all new season of wild auction battles in California. Fan-favorite auctioneers and buyers including Dan and Laura Dotson, Brandi Passante, Jarrod Schultz, Darrell Sheets, Kenny Crossley, Rene Nezhoda and Casey Nezhoda, as well as Ivy Calvin and his sons return to the lockers in search of the next big find. Viewers will join the thrill of the hunt at the fast-paced auctions for a look into the exhilarating, high-stakes world of storage auctions. Buyers go to the storage facilities, willing to risk it all, to bid on the contents of lockers and if they're lucky, find treasure not just trash!

Iconic auctioneers Dan and Laura Dotson once again lead our buyers through unit after unit filled with all kinds of surprises. As for the buyers, Brandi Passante has focused her attention on home staging and storage lockers have a way of offering her all kinds of furniture and knick-knacks. Darrell Sheets is lured out of a cozy retirement, being simply unable to resist the pull of auctions. Ivy Calvin has added his son to the family business, bringing along Ivy Jr with him to increase his chances of success. Rene Nezhoda finds himself re-arranging his business, potentially moving his storefront to a location closer to the other buyers. And let's not forget Kenny Crossley, who's still trying to get the hang of buying treasure-filled units (without having to spend a fortune), all while keeping everyone in stitches. But perhaps the biggest development this season is the long-anticipated return of Barry Weiss. Adopting a strict new buying regimen and working with an internationally-recognized bidding coach, Barry is intent on getting back in the game and playing for keeps this time.

According to a poll of 2,004 Americans, men actually cry more than women -- averaging a good weep about four times a month. Women, on the other hand, weep about three times per month. (https://bit.ly/3pp2ona)

A new survey of 2,000 adults finds that for 77%, alone time is necessary for them to decompress. More than two-thirds (68%) are willing to say “no” to social plans just to have more time to themselves and another 61% would do almost anything for more “me-time.” (https://bit.ly/2XJ4mUf)

A drunk college student in the UK got caught in a clothes dryer.

A court has ruled that Pablo Escobar's cocaine-hippos must be given the same rights as people. (https://yhoo.it/3np25q8)

A veteran prop master has revealed he was offered the job to work on Alec Baldwin’s “Rust” — but turned it down after “massive red flags” left him convinced it was “an accident waiting to happen.” (https://bit.ly/3GkxfYp)

In a twist that might surprise some fans, “Star Wars: The Rise of Skywalker” has beaten out Christopher Nolan's “Tenet” to win best sci-fi movie at the Saturn Awards. (https://bit.ly/3CfWWXv)

Kellogg's is facing a $5 million lawsuit for not having enough strawberries in its Strawberry Pop-Tarts. (https://bit.ly/3EgTU5U)

A new report has found harmful plastic chemicals in some fast-food items. (https://wapo.st/2XVAYu4)

Disneyland is raising its ticket prices to $164 for a single day. (https://bit.ly/3CxCv8o)

A guard dog trainer in Kentucky posted a video of a puppy going through a haunted Halloween obstacle course. (https://yhoo.it/3pRTLSF)

A man died after being gored at a Spanish Bull Running Festival.(https://bit.ly/3w1PrRz)

A video has gone viral from Australia showing a Labrador retriever forming a friendship with a whale shark. (https://bit.ly/3E6y3Oi)

A Florida Man appearing for arraignment on a battery charge was arrested yesterday after striking a female victim “with the letter ‘G’” that he removed from a courthouse sign, according to an arrest report. The victim in Tuesday morning’s attack is the same woman Jordan Thomas, 26, is accused of battering in the prior case. Thomas, seen at right, was scheduled to be arraigned yesterday on a misdemeanor charge stemming from an alleged battery last month on Shanterria Rolle, a 23-year-old Vero Beach resident. Thomas, an Amazon driver, was free on $500 bond in the pending criminal case. Investigators say that Thomas was inside the Indian River County courthouse yesterday morning when he grabbed “a signage letter from the black board in front of Court Room 3" and threw it at Rolle, “striking her with the letter ‘G.’” Video from a security camera “validates the charge,” a sheriff’s deputy noted. The incident, cops say, occurred while court was in recess. Rolle is described in the arrest report as the "victim and witness in the original charge of Battery." Thomas was arrested for battery and violating the terms of his pretrial release in the prior case. Thomas is being held without bond in the county jail. (https://bit.ly/3m1ERqi)

A San Diego man seemingly trying to reboot “Speed” told police that he couldn’t stop driving a stolen tow truck or a bomb would explode. The suspect, who has not yet been publicly identified, led police on a chase from Pacific Beach to downtown San Diego Monday evening, never going above 10 mph, Officer John Buttle told the San Diego Union-Tribune. After more than an hour of the slow-motion chase, police eventually stopped the truck, using spike strips to flatten the tires. The driver refused to get out of the car and police deployed pepper balls into the vehicle until he was forced out, according to the Union-Tribune. No bomb was found. (https://bit.ly/3G52CG6)

The great man is he who does not lose his child’s-heart.