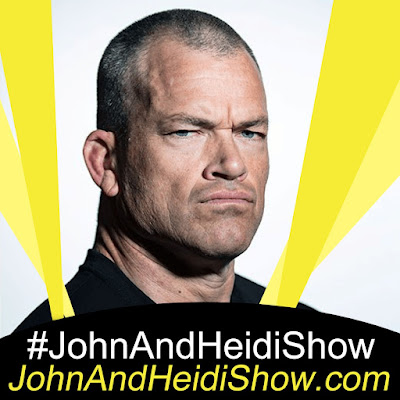 Jocko was a Navy SEAL for 20 years, rising through the ranks to become the commander of Task Force Bruiser – the most decorated Special Operations Unit of the Iraq War. After retiring, Jocko continued on the disciplined path of success, co-founding Echelon Front, a multi-million dollar leadership and management consulting company, writing the #1 New York Times bestsellers Extreme Ownership and Leadership Strategy & Tactics: Field Manual, as well as other New York Times and national bestsellers, Discipline Equals Freedom and The Dichotomy of Leadership.

A new study found that HALF of unvaccinated Americans say NOTHING will change their minds. (https://bit.ly/3CTssef)

A Facebook study found that 1 in 8 users are addicted to the app in a way that's damaging their work, relationships, and sleep. Some people say it's MORE than 1 out 8 people having their lives ruined by Facebook. (https://www.dailymail.co.uk/news/article-10173395/Facebook-researchers-1-8-users-addicted-app-damaging-work-relationships-sleep.html)

An Orange Beach man was arrested in Pensacola after being accused of intentionally crashing his boat into another. Kenneth Gordon, 52, is charged with reckless operation of a vessel, failure to report an accident, aggravated battery and criminal mischief. Both boats were registered to Alabama residents, according to the Florida Fish and Wildlife Conservation Commission. The people on board the boat that was hit, said they were passing by, when the wake from their boat caused Gordon’s boat to rock. The people on Gordon’s boat became agitated. Gordon’s boat then caught up a short time later and collided with the boat, causing two passengers on Gordon’s boat to be ejected into the water. A witness said Gordon picked up the two people who were ejected from his boat and left the area. She said she believed the operator of the first boat, Gordon, was intoxicated. Gordon’s boat then left the scene. Witnesses also reported seeing Gordon yelling and they say Gordon intentionally crashed his boat into the other one. It will cost about $6,000 to repair the boat’s damage. Gordon was booked Monday into the Escambia County Jail and released Tuesday on a $5,500 bond. (https://bit.ly/3bDolHj)

Tom Hanks says Jeff Bezos wanted him to pay $28 million for a ride on his Blue Origins rocket. (https://bit.ly/3qclk9r)

A 77-year-old retired Chicago Fire Captain shot and killed an armed robber who entered his house on Saturday. (https://www.dailymail.co.uk/news/article-10173945/Retired-Chicago-Fire-Department-captain-concealed-carry-gun-holder-kills-armed-robber-Chicago.html)

A Bronx Teacher was arrested after he sent students pictures of his genitals over Snapchat. (https://www.dailymail.co.uk/news/article-10173913/Bronx-school-teacher-arrested-sent-lewd-photos-students-forcibly-touched-teen.html)

A Florida second grader has been suspended over 30 times for refusing to wear a mask in the classroom. (https://bit.ly/3BPT3Y5)

The City Of Minneapolis voted to keep its police force after a ballot initiative that would've replaced it with Social Workers. (https://bit.ly/3mDC3QK)

The US Army put out a video of their parachute team competing in the national skydiving competition. (https://bit.ly/3o1qwdt)

Japanese Princess Mako quietly married a commoner without traditional wedding celebrations and said their marriage — delayed three years and opposed by some — “was a necessary choice to live while cherishing our hearts.” (https://bit.ly/3mhIGIm)

It lived rent-free in her head for 20 years. A Georgia woman was shocked that a huge “booger” in her nose was actually a bead that had been lodged there for two decades. The revolting phenomenon first came to light after the Smyrna resident suffered a sinus infection earlier this year that left her nose completely congested. Hoping to get to the root of the problem, she examined her nostrils with an ear wax camera and discovered a blue object lodged in her nasal passage. Fortunately, Hamilton managed to extract the sapphire sinus squatter and, after examining the object, “the memory of the bead flooded back to me,” she said. (https://bit.ly/3bjExgx)

A doorbell camera captured the appalling moment that a Minnesota Amazon courier carelessly hurled two packages onto a customer’s doorstep from the side of the road. The 26-second clip shows the delivery driver sidling up to the curb, then casually launching the parcels at the porch like frisbees, so they bounce off the cement. Then, apparently unashamed of his actions, he nonchalantly strolls back to his truck and pulls away. Thankfully nothing was broken — although a toy puzzle the customer had bought for their baby was slightly damaged. To add insult to injury, according to the package recipient, Amazon reportedly did “nothing” when they filed a complaint about the incident. https://bit.ly/3pJsy4w

Don’t compare yourself to others. Keep playing the competitive game between you and you. - Unknown